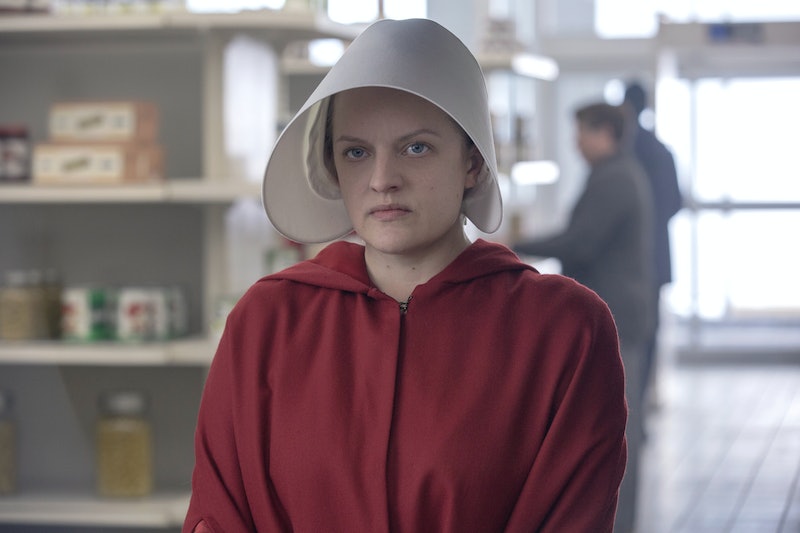 When the trailer was released for Season 3 of The Handmaid’s Tale, it seemed the show was primed for a revolution. Not only did June manage to win Serena Joy’s companionship by wielding some influence over her, but by choosing to stay back in Gilead for her daughter at the end of Season 2, June regained some control over her narrative. But as Season 3 wears on, it's become apparent that the more heroic the show makes June, the less invested the story has become in its own powerful beginnings. Nine episodes in, The Handmaid’s Tale seems to be so consumed with June that it’s now a show about little else. I'll come right out and say it: The Handmaid's Tale has a June problem.

Season 3 premiered a few weeks after the underwhelming Game of Thrones series finale, and it’s hard to miss the similarities between the trajectories of both shows. Not only are they both adapted from books, but both outgrew their source material to define their own televised path. Game of Thrones at least had author George R. R. Martin’s final endgame in mind as it worked toward its finale. The Handmaid’s Tale, on the other hand, sped through the events of the book back in Season 1, and seems to be churning out new seasons with no clear endgame in mind. Most importantly, both shows were built on a foundation of fear and unpredictability: The regimes on both shows are ruthless, meaning some of your favorite characters could meet their end long before fans were ready to bid them goodbye. Caution was integral to survival in Gilead, and in Westeros — at least in the early seasons.

But those were the old days in The Handmaid’s Tale, when June, its narrator, moved through Gilead with fear. Who can forget June and Emily’s early interaction, in which each Handmaid put up a pious front out of fear? Watching the first season was an act riddled with anxiety. You felt the palpable fear of the Handmaids, the cruelty they were being subjected to.

Even June’s burgeoning freedom within the Waterford household made a bit of sense. Not only did she gain Fred’s trust with her Scrabble skills, but she used his emotional separation from Serena to her advantage. But it was the advances that June made with Serena in Season 2 that count among the show’s finest moments. A pregnant June gains immunity from physical violence, and uses Fred’s absence to shed light on Serena’s own diminished movement in the social and political life she helped create. How else could Serena Joy agree to give away her child to June, who is fleeing for Canada? It also helped that Yvonne Strahovski played Serena Joy with selfishness, vulnerability, grief, and joy, which gave the show a more complex perspective instead of relying solely on June's narration.

But in Season 3, June decides to stay back for Hannah. It’s a convincing plot for the creators to keep June as the voice of the oppressed. After all, the mother in her can never fully leave knowing her first born is still unsafe in Gilead. But with that swerve, something stranger happened. For making that choice to stay rather than fleeing, the show decided that June would now not just be the story’s narrator, but also its hero and savior. It made June the chosen one, and for that reason alone, the show failed its book on many accounts.

The most striking quality of June’s character in Margaret Atwood’s book was her ordinariness. She wasn’t a badass feminist like her mother, nor as gutsy and rebellious as her best friend Moira. She was a hesitant lover but a committed mother. The normality of her character was helpful in making The Handmaid’s Tale a scary reality of the everywoman. It made her vulnerability proof that every Handmaid in Gilead was as exposed to mortal danger as she was.

But June in Season 3 is not an ordinary woman. She not only helps in getting a child across the border, but is able to manipulate people around her to ensure her survival, often to a degree that betrays the show’s founding sense of danger. Season 3 June is reckless. In a high-ranking Commander’s home, she is able to separate herself from the other Handmaids, share a cigarette with Serena Joy, and blow it into the camera’s face. This June snaps, “Bite Me,” to her pious walking partner OfMatthew without fear of repercussions. This June takes the kind of liberties with her new Commander that would get any other Handmaid killed. She manipulates his sickly wife to take a walk so she can meet her daughter. She doesn’t ask or beg for freedom, she demands it. This June, in short, is invulnerable to danger.

Not only does this concentrated focus on June’s heroism make little sense, it also makes her the kind of character who is difficult to root for. In the most recent episodes, June endangers Commander Lawrence’s wife, who has been nothing but nice to her, and is directly responsible for the death of two women of color. She manipulates Hannah’s Martha, a woman who cared for her daughter, to set up a meeting between them. When this comes to light, the Martha is hung, whereas June is left unpunished. June then rallies up all the other Handmaids to bully and exclude OfMatthew who, it turns out, had given the Martha away. This drives OfMatthew to suffer a violent breakdown, and she is shot down by guards. Whatever happened to a pregnant Handmaid being incredibly valuable to Gilead?

What’s worse is that June is not sorry for the part she plays in OfMatthew’s death. Where is the June who understood the suffering of every woman, pious or otherwise? The television adaptation has been rightly criticized for its poor handling of race, for its unrealistic assertion that in an overzealous autocracy, white women and women of color would be oppressed in the same way. If the show was indeed making a commentary on how disposable black women are to Gilead by killing off OfMatthew, then they committed two crimes. One in using a woman of color as a plot device, and another in instantly making June less likable.

There is so much yet to explore in Gilead, like Commander Lawrence’s role in its architecture, the war on Gilead's front lines, and the regime's place in global politics. The most engaging episode this season shifted the focus to DC, where a Christened Washington Memorial loomed over an oppressive state. The Handmaid’s Tale is most effective television when it leans into the dangers of Gilead and makes them feel like a foreseeable reality. After all, Gilead is not June’s world, but the world of every woman who has suffered at its hands.