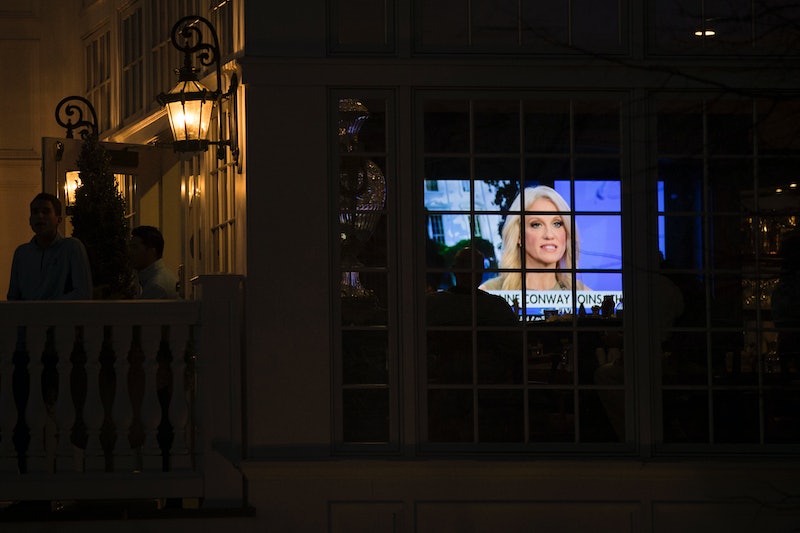 First, it was alternative facts. Now it's alternative threats. Counselor to the President Kellyanne Conway cited a fictitious massacre she dubbed "the Bowling Green massacre" as justification for Donald Trump's executive order to suspend refugee admissions and travel from seven Muslim-majority countries in an interview with MSNBC on Thursday. Whether it was a slip of the tongue or a deliberate attempt to mislead, Conway's Bowling Green massacre comment sparked a flood of tongue-in-cheek remembrance for the victims that never were in the attack that never was. All humor aside, Conway's invention of the Bowling Green massacre should concern you. Consider it a glaring red flag in your relationship with the new White House administration.

"I bet it's brand-new information to people that President Obama had a six-month ban on the Iraqi refugee program after two Iraqis came here to this country, were radicalized, and were the masterminds behind the Bowling Green massacre," Conway told Chris Matthews Thursday during an appearance on MSNBC's Hardball. "Most people don't know that because it didn’t get covered."

While Conway claimed the public was uninformed about the Bowling Green massacre because the media failed to report on it, it's safe to assume the public's ignorance is due more to the fact no such event ever occurred. What did happen is that in 2013, the Obama administration re-evaluated its vetting measures of Iraqi refugees after two Iraqi citizens living in Bowling Green, Kentucky, were arrested and sentenced to prison on federal terrorism charges. The two men had confessed to assisting al Qaeda and attacking U.S. soldiers in Iraq. Contrary to Conway's statement, there was no massacre in Bowling Green and no formal six-month ban on Iraqi refugees.

The truth is, although Conway invented it, the Bowling Green massacre is a troubling event that affects us all. It represents a gross disregard for facts by a senior member of President Trump's administration. Moreover, the gaffe stands as proof that Trump's administration is more than willing to lie to the public and fabricate threats to national security in an effort to justify new restrictions and crackdowns — a favorite tactic of authoritarian governments.

Often, authoritarian governments weave together fact and fiction to construct an alternative reality they then use to justify the need for sweeping new restrictions on democratic freedoms and harsh crackdowns on dissent. For example, in 1933, the German government designed a false reality behind the Reichstag fire, painting the fire as an attack on the state by Communists, according to the United States Holocaust Memorial Museum. The government, at the order of Adolf Hitler, then used the fire to justify a permanent suspension of civil rights, including the right to assembly, freedom of speech, freedom of the press. For a more recent example, look to the Turkish government, which has inflamed coup fears with unproven domestic and foreign conspiracies to increasingly criminalize (and silence) opposition.

As funny as the internet's response to Conway's Bowling Green massacre may be, the red flag her comment represents shouldn't get lost in the laughter. A member of the Trump administration fabricated an event (a gross disregard of fact) in an attempt to bolster support for new government restrictions.