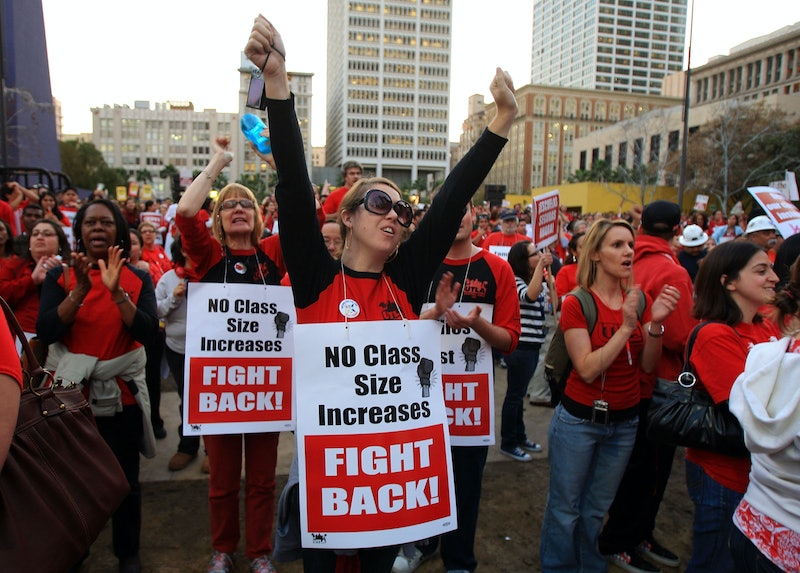 Following a number of other U.S. cities in the past year, teachers in California's largest school district, Los Angeles Unified, are preparing to strike. The reasons why LA teachers are going on strike mirror those in districts in Arizona and Colorado, where teachers staged walkouts last spring. They're looking for higher wages, fully-staffed campuses, and smaller class sizes.

Due to a legal technicality, the teachers actually postponed the start date of their strike from Thursday to Monday, Jan. 14, according to The Los Angeles Times. United Teachers Los Angeles, a union representing Los Angeles Unified educators, told The Times there was uncertainty over whether they'd given the district the required 10-day notice to strike, and decided to wait an extra couple of days to be safe.

A few more days isn't very long, especially considering that tensions over contract negotiations have been rising for months. Back in August, The Times reported that 98 percent of union members who voted on strike proceedings approved of a walkout. "This is a historic number," union secretary Arlene Inouye told the paper at the time. "Our members are pretty upset with Supt. Austin Beutner’s disrespect for educators."

If teachers go through with the walkout on Monday, it will be the first Los Angeles Unified strike since 1989, according to CBS Los Angeles. But given the impact on a student population of more than 600,000, the district is hoping the delay will provide an opportunity to work out a deal and avoid a strike, reports KTLA.

On Wednesday, The Times reported members of both sides — the union and the school district — met again to discuss contract terms. The district apparently offered an extra $75 million for hiring more staff, which would also reduce class sizes, but didn't include anything by way of additional raises for teachers.

"Both sides made serious offers," LA mayor Eric Garcetti told The Times, "to focus on the issues we all agree on: smaller class sizes, more support staff, decent pay and improving existing schools instead of opening new ones."

According to KTLA, the district has offered teachers a 6 percent raise over two years of a three year contract. However, the union is demanding a 6.5 percent raise that would go into effect immediately, and apply retroactively to the 2017 fiscal year.

Wages aside, funding "fully-staffed" campuses — schools supplied with enough librarians, counselors, nurses, and other support staff — is a big priority for teachers. According to KTLA, the union is also fighting for more say in how charter schools — essentially, privately run public schools that compete for students and funding — operate.

Like most strikes, this one comes down to argument over funding. Union representatives told KTLA that the district has a $1.8 billion stockpile it could be putting to use, while the district claims it in fact can't afford to meet demands. But regardless of the outcome, United Teachers Los Angeles seems to view this strike as part of a larger movement to highlight a national need to invest in public education. "Each state is different," union president Alex Caputo-Pearl told KTLA, "but the commonality across all states is teachers, and parents are sick of schools not being invested in."