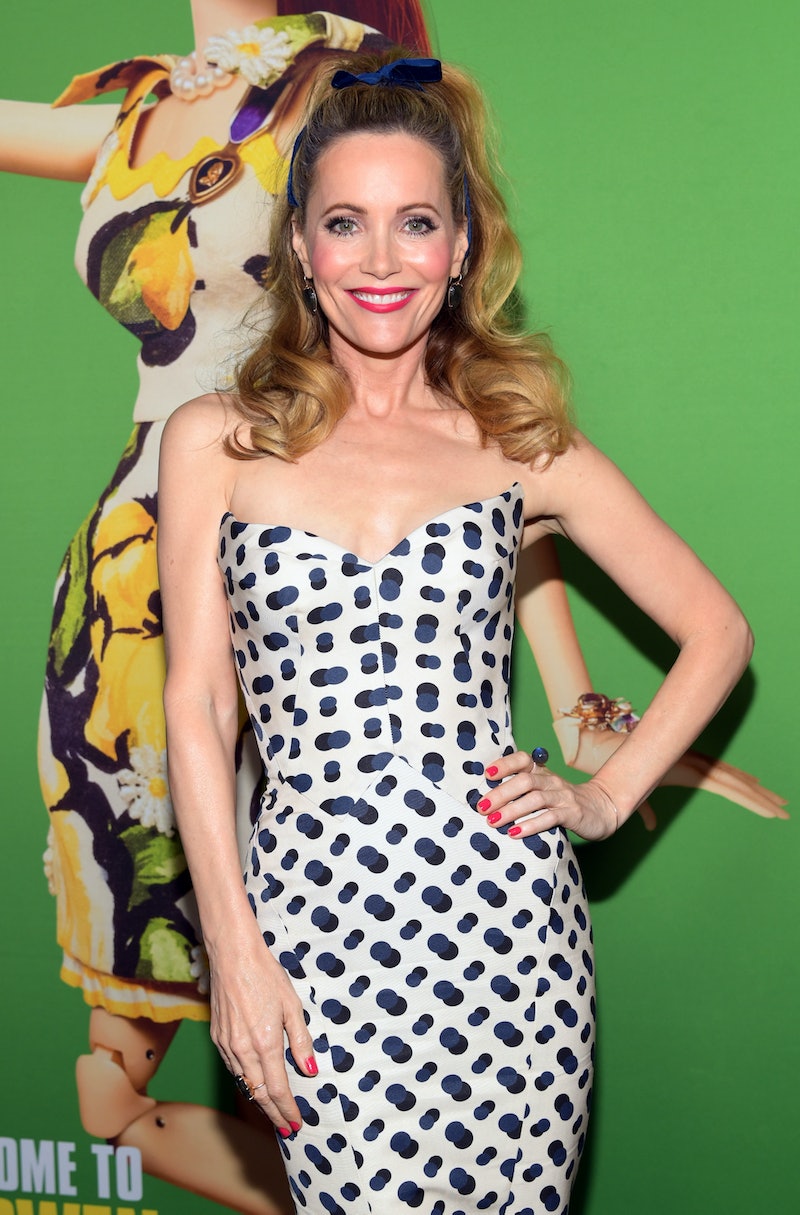 Most of the women in Welcome to Marwen (out Dec. 21) are recreated in animated doll form, and the doll of Leslie Mann's character in particular looks like the epitome of a typical male fantasy. As moving as it is watching the film, written and directed by Robert Zemeckis (Forrest Gump), there were certain times that I found myself thinking, "Here we go. Another man's idea of what a sexy woman should look like." But sitting down with the actor ahead of the film's premiere, I learned why Leslie Mann actually wanted her Welcome to Marwen doll to be sexualized.

The story is based on the life of Mark Hogancamp, a man who was brutally attacked for cross-dressing, causing him severe trauma and memory loss. To cope with his PTSD and continue his life as an artist, Mark (Steve Carell) creates a fictional WWII-era town called Marwen, which is populated by doll versions of real people in his life. There, his alter ego Hogie is assisted by a crew of badass women helping him defeat Nazis — Mann's Nicol being one of them.

As she dons a lacy red top (with enough cleavage to fill it), a tiny skirt, lacy black stockings, and heels — topped off with a costume-y sailor hat — it's hard to ignore how drastically different Doll Nicol's style is from Human Nicol's, and from Mann's. When I bring it up, the actor laughs and agrees. To my (very pleasant) surprise, Nicol's look was the actor's idea from the start.

"I thought, 'Wow, I ended up going to that super sexy thing,'" she says. "That was my instinct! It was fun."

And it was more than just a fun opportunity to play dress-up. Mann's instinct to dress Nicole this way speaks volumes about what women are capable of. It's powerful to see women on screen embracing their sexuality while still holding their own and kicking butt — even if that's in doll form.

"We did have a talk in the very beginning. Bob [Zemeckis] sat down with all of the girls, and probably Steve too, and he talked to us about how we wanted, and [we] saw our dolls," the actor says. "We were going through an iPad with a bunch of different doll clothes choices and chose different shoes and stockings and thigh-high boots. And I made my doll very, super sexy." (The boots were eventually changed to stilettos for story reasons.)

For Mann, tapping into such a sexy persona was a way of letting her own alter ego out to play. "I thought, 'That's probably how I would dress if I thought it would look good on me right now,'" she jokes. The actor claims that she's "super self-conscious [with] terrible social anxiety" in real life, so glamming up her doll gave her a safe space through which to explore those looks.

"I'm so uncomfortable in life, in general. I feel like I'm not making sense, like I'm out of place, my voice is weird," Mann confesses. "I'm weird, I have a weird sense of humor. The list goes on." Nicol has proven to be yet another way for Mann to express herself through her craft.

In what's otherwise, quite literally, a man's world, Nicol represents so much more than one woman's alter ego. She stands for every woman who won't let people tell them that embracing their sexuality, however they feel comfortable doing so, makes them lesser versions of who they are.

More like this
Michelle Williams Laughs Often About Motherhood Thanks To 'The Fabelmans'
By Marina Watts
In 'The White Lotus,' Leo Woodall Gets His Moment
By Gabrielle Bondi
Elizabeth Debicki On Her Approach To The Most Debated Scene From 'The Crown'
By Grace Wehniainen
Yes, That's Lindsay Lohan's Sister Singing In The 'Falling For Christmas' Movie
By Radhika Menon
Get Even More From Bustle — Sign Up For The Newsletter