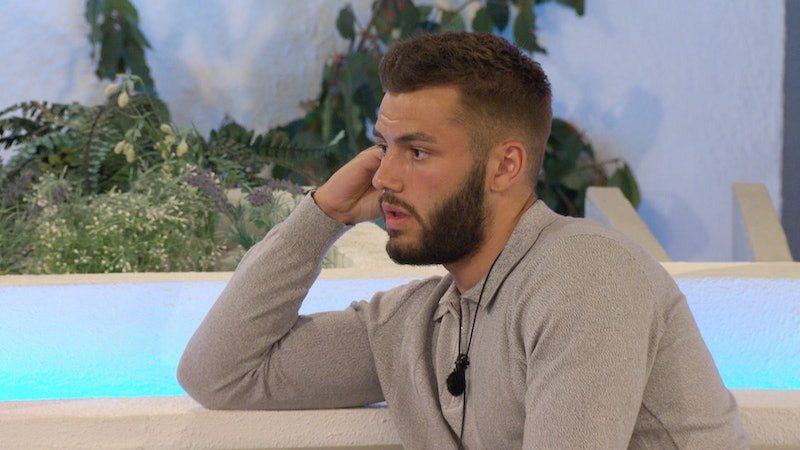 Any time Love Island becomes a little dry, producers spice things up — usually by causing an argument or two. The tweets and headline challenges in which islanders guess the missing names in tweets from the public or articles in the press, has been notorious for this in previous year. This year, the News Splash challenge has proved particularly controversial and led to the harassment of a journalist and hundreds of complaints. So did Love Island's headline challenge go too far in the pursuit of entertainment?

More than 350 viewer complaints were sent to Ofcom after the episode aired, reports the Evening Standard. And it's not surprising. The 'fill in the gaps' game caused friction between numerous couples and friends in the villa.

The most upsetting instance, according to viewers, centred on a headline suggesting Finn had his head turned in Casa Amor. Published by Heart Radio, the article's full headline read: "Casa Amor causes Callum, Finn and Nas' heads to turn on tonight's Love Island." (Said article now appears to have been taken down. I have contacted Heart to clarify.)

The article in question was a write-up of a press release sent by ITV2 before the Casa Amor episode aired, one journalist said on Twitter. According to Digital Spy, it detailed Finn's chat with Casa Amor contestant Natalia. During his stay in Casa Amor, Finn insisted he wouldn't stray from Paige, but the press release, seen by Bustle, did include the following quote from him: “Boys, I personally don’t think my head’s going to turn. However, there is a however, obviously Molly, Natalia and Jamie… she’s funny…”

Despite this, some viewers thought the headline was "fake news", reports The Sun. Callum and Nas' inclusion in the headline did not come as a shock to the islanders. Finn's name, however, visibly upset his (now official) girlfriend Paige. Finn, who remained loyal, was quick to respond, telling Paige to verify his behaviour with the help of the Casa Amor girls. “The paper tells me different, Heart [the website] tells me different," she replied.

A row between the pair featured in the following night's episode. Finn said: "[I had] not done a thing in Casa Amor that I regret. Whatever I've done was respectful to you." But Paige was still upset, saying: The headline in black and white tells me different. What do you want me to take from that?”

Although it's likely the headline was simply reflecting a clip Love Island bosses had edited, the show's fans didn't see it that way. Numerous angry tweets were directed toward the writer of the article, and her Twitter profile no longer exists.

"Imagine bullying a journalist off of Twitter for writing up a press release about a reality TV show," a fellow journalist tweeted. "Don’t now preach about mental health of the contestants when a young woman has been hounded off of every social media with death threats and disgusting comments on her appearance."

They're right. The vitriol is being aimed at the wrong person; it's not the journalist, who will remain unnamed, or even the islanders who deserve the spotlight. (Callum, Molly, Luke T, Siannise, Shaughna, and Mike were all affected by the challenge.) It's the people who make the show.

A reality show is not reality; it's a structured piece of entertainment, with a dollop of realness, designed to take watchers on an emotional rollercoaster. But, too often, real people's mental health is brushed aside along the way.

Contestants, and viewers, are misled with the help of carefully edited clips and sensationalised scenarios. The public's tweets and journalist's work are used in games, seemingly without their permission and with little thought for what might come after. (I have contacted ITV2 for comment.)

Even after the death of two previous Love Island contestants by suicide, consequences don't appear to be at the forefront of producers' minds. Hearts are broken in unnecessarily cruel ways, friendships are shattered, and, now, a journalist has been subjected to the toxic side of social media for simply doing their job.

I don't know about you, but I think it's high time reality TV executives put people, rather than cheap ratings, first.

More like this
Twitter Can’t Get Over Stormzy’s Surprise Cameo On Winter 'Love Island'
By Sophie McEvoy
This Pre-'Love Island' Video Of Olivia & Zara Together Changes Everything
By Bustle UK
Every Season Of 'Love Island' Ranked Best To Worst
By Alice Broster, Frances Stewart and Sophie McEvoy
ITV’s New Take On 'Love Island' Is Only For MILFs & DILFs
By Sam Ramsden
Get The Very Best Of Bustle/UK
Sign up for Bustle UK's twice-weekly newsletter, featuring the latest must-watch TV, moving personal stories, and expert advice on the hottest viral buys.