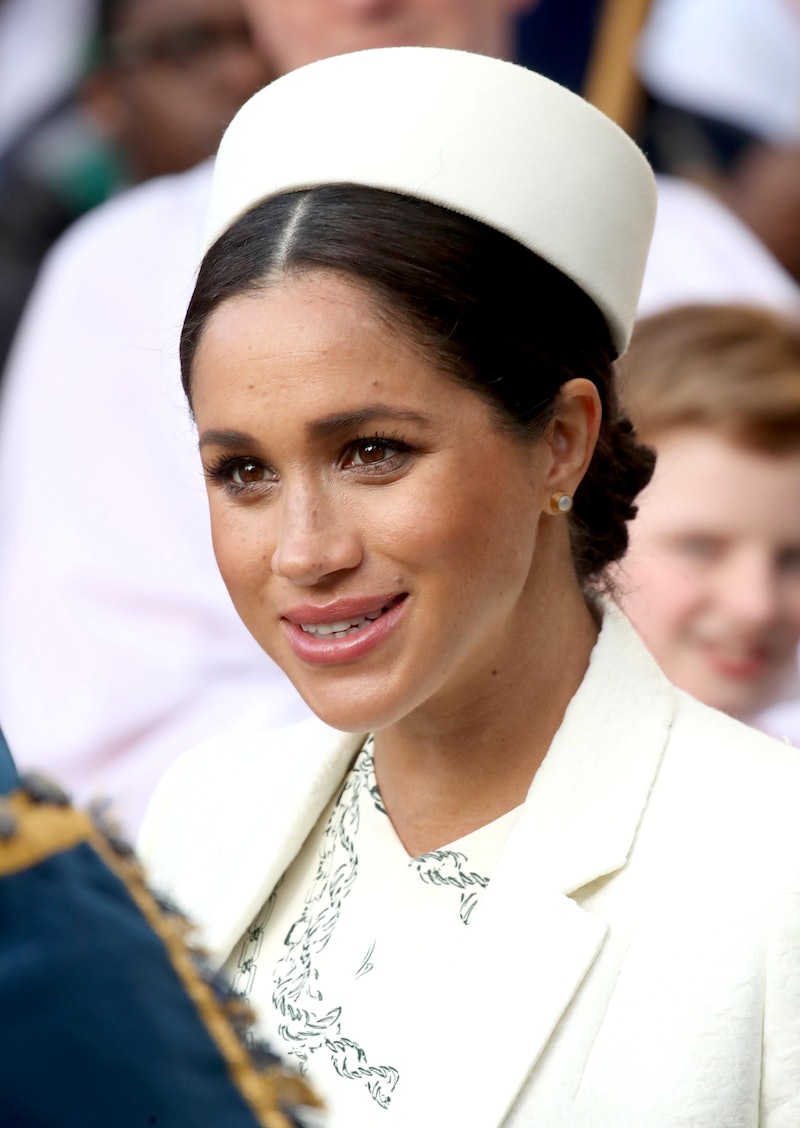 The Duchess of Sussex is dedicated to telling powerful women's stories — and this new report proves it. According to People, Meghan Markle was against being on British Vogue's cover for the September issue, but only because as guest editor, she wanted readers to focus on the other chosen cover stars. For the issue, Markle featured 15 women who are impacting the world in a meaningful way, titling the issue "Forces For Change."

British Vogue's Editor-in-Chief Edward Enninful, with whom Markle worked on the issue, revealed that the two discussed putting her on the cover, but the duchess ultimately declined the opportunity. In a statement on the magazine's website, Enninful discussed Markle's decision:

"From the very beginning, we talked about the cover — whether she would be on it or not. In the end, she felt that it would be in some ways a ‘boastful’ thing to do for this particular project. She wanted, instead, to focus on the women she admires."

The September Issue's cover stars include politically engaged actors such as Yara Shahidi, Laverne Cox, Jane Fonda, Gemma Chan, and Jameela Jamil, as well as writer Chimamanda Ngozi Adichie, dancer Francesa Hayward, climate activist Greta Thunberg, and model Adut Akech Bior. The cover features a portrait of each woman, as well as a mirror, which is meant to encourage the reader to implement change in their own life, according to the BBC.

Markle is the first guest editor of the September issue in 103 years, as per People, and it's clear she isn't taking that responsibility lightly. On Sunday, Markle's vision for the issue was explained on the Sussex Royal Instagram, along with a picture of the cover:

"For the cover, The Duchess chose a diverse selection of women from all walks of life, each driving impact and raising the bar for equality, kindness, justice and open mindedness. The sixteenth space on the cover, a mirror, was included so that when you hold the issue in your hands, you see yourself as part of this collective."

The Sussex Royal account also posted a brief video from the British Vogue photoshoot on Instagram, which included several clips of the cover stars explaining what their platforms meant to them. The caption read, "Her Royal Highness, The Duchess of Sussex is the first Guest Editor for @BritishVogue’s September Issue and for the last seven months has worked to create an issue of inclusivity and inspiration, focusing on what connects us rather than what divides us."

While the Duchess of Sussex wanted to remain behind-the-scenes on the magazine, many of the women who modeled for the cover explained what the experience meant to them. On Sunday, Jameela Jamil posted about the issue on Instagram, writing:

"Gah. I’m on the COVER of the September Issue of VOGUE! With some of my heroes. Guest edited by a total hero, HRH The Duchess of Sussex, (Tahani’s good friend) and @edward_enninful created such a beautiful messaging behind this iconic issue. I grew up never seeing Pakistani or Indian girls on the cover of magazines, and this means the world to teenage me."

On Sunday, Yara Shahidi also posted the cover on Instagram as well, and thanked Markle for elevating the voices of the artists and activists. She wrote, "Thank you @edward_enninful and the amazing HRH Meghan Markle, Duchess of Sussex @sussexroyal for considering me one of the #ForcesForChange for @BritishVogue, amongst these incredible change makers, and for using this iconic platform to continue to shift narratives and expand the role of fashion."

The Duchess of Sussex is a longtime advocate for women, and it would certainly make sense if she chose to appear beside fellow activists on the cover. However, her decision to keep the readers focused on the work of the 15 other women shows that she uses her platform deliberately, and fans can look forward to gaining more insight into Markle's perspective throughout the issue.

More like this
Here’s Everything You Need To Know About Operation London Bridge
By Bustle UK
15 Offensive AF Jokes In 'Friends' That Really Aren't OK
By Tolly Wright, Bustle Editors and Meguire Hennes
The Miraculous Real-Life Thai Cave Rescue Mission Still Resulted In 2 Deaths
By Brad Witter
10 Must-Read New Books Out This Week
By K.W. Colyard
Get Even More From Bustle — Sign Up For The Newsletter