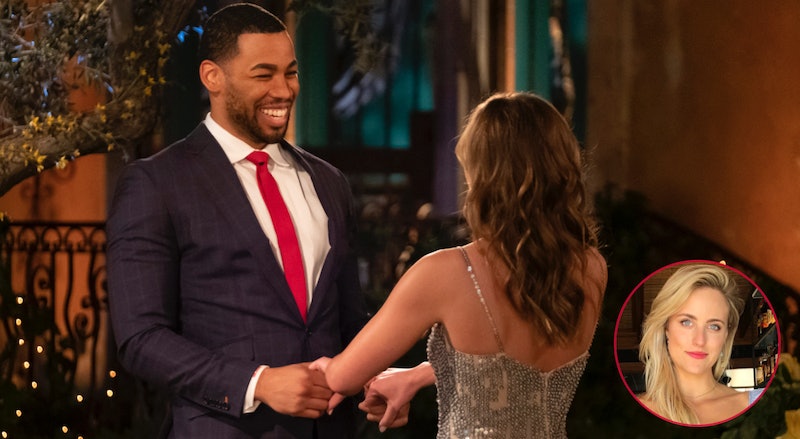 While competing on Arie Luyendyk Jr.'s Bachelor season and Season 5 of Bachelor in Paradise, Kendall Long experienced love and heartbreak on national television. Now that she's been through it all, she has plenty of words of wisdom for new contestants, and she's dishing all to Bustle. Read what Kendall has to say about Hannah's confrontation of Luke, her love of Bachelorette contestant Mike, and more in this week's recap.

Last week we were left on a cliffhanger as the Battle of the Lukes took place. Quite honestly, Iʼm not sure if either of them are really here for the right reasons. Hannah, having had enough of the Luke shenanigans, brings both of the Lukes together to battle it out face to face. Itʼs clear that Hannah already has a bit of hope that Luke P. will prevail given their steamy connection. But as the two gentlemen continue their back and forth argument, it isnʼt long before she's had enough and walks away without a word.

I was so frustrated, because there were so many questions that could have been asked to clarify this situation. I hoped Hannah would have been a mediator in this situation, but I think that deep down maybe she didnʼt want to know the truth about Luke P. because her feelings were so strong for him. As someone who has been in an unhealthy relationship with someone manipulative in the past, I know how she feels. Itʼs hard when you feel like your heart and mind are battling on doing the right thing. At this moment I feel like Hannah is in denial that Luke P. isnʼt the man she wants him to be. Always be wary of a significant other who no one likes! There IS a reason.

We head into this week's rose ceremony with a heavy heart, knowing all too well that Hannahʼs mind is made up... or shall I say heart, because we know her mind fears the truth. But before Hannah can hand out a single rose, Luke S. pulls her aside. Seeing the writing in the wall, he excuses himself from the show with a warning to Hannah to keep her eyes open. We can only hope the truth is brought to light.

Meanwhile, John Paul Jones doesnʼt get a rose, which I am not OK with! RIP JPJ. Your hilarious reactions will be missed. Luke drama aside, Hannah reveals to the remaining men that they will be journeying to the home of the Loch Ness monster, Scotland. The men head to a local pub where Hannah greets them. After a pep talk about a fresh start to a new week in a new country, Hannah steals Mike for a one-on-one.

I'm excited to see more of Mike, with his sincerity and “not going to take any BS from anyone” attitude. But before we can see what their date has in store, the men are left bickering in the pub with none other than Luke P., whose opinion of all the other men is seen in his interview when he says, "Dude, you are so whatʼs not for Hannah and it makes me want to gag." Well, Luke, I can name a few people who probably feel the same about you at this point. Jed calls Luke P. The Luke-ness Monster, and I have to say thatʼs a pun I can get behind.

I can also get behind Mike and Hannahʼs one-on-one! With Mike blasting us with a huge grin, the two set off on their Scottish exploration. This date has to be one of my favorites. What's better than exploring a new place with someone you fancy? Mike has proven to be so well spoken and sincere. We saw such a refreshingly new side of him this episode aside from the serious, protective side, which I still love. If Mike isnʼt Hannahʼs one at the end of this, Iʼm petitioning for him to be the next Bachelor.

During the night portion of their date, Mike struggles with his nerves. Because of his past, itʼs easy to see why Mike has trouble putting himself out there. Hannah comforts him by telling him that this is a scary way to fall in love, but for it to work, you have to take the risk, and itʼs true. It's terrifying to not only put yourself out there in front of the world but to also do that while going through the most exposing experience of your life, finding love. Personally, I had a hard time at first letting all my emotions and insecurities shine on TV, but if you truly let yourself go, you open yourself up not only to the beauty of discovering so much within yourself, but also to love. (Cue a clip of me and Joe's relationship announcement on the Bachelor in Paradise reunion.) It works! You just have to take the leap. Thatʼs why they call it “falling” in love.

During the closing of Mikeʼs one-on-one date, he reveals that he can “see [himself] getting down on one knee if [heʼs] ever so lucky.” Hannah must be feeling those warm and fuzzies too, as she pins a rose on Mike. Despite all the craziness with all the men in the house, my heart is happy knowing we will see more of Mike.

Finally, the men get to go on a group date without Luke P.! They're met by rugged, bearded Scottish men in kilts who were sent to show them what being a real Scottish man is all about. The men train by throwing axes and wrestling while rocking kilts. Letʼs just say the traditional way to wear one of these man skirts is sans underwear, which brings the Bachelorette Black Box back out, and Hannah got an eyeful during the kilted wrestling match.

In the end, it was Jed who pinned Hannah and also won the competition. The day portion of the date may have been full of wrestling, but the night portion was full of a whole different kind of wrestling. Hannah got hot and heavy with Jed, Peter, and Tyler C. But the tongue wrestling victor was Jed, who was awarded the group date rose.

Now onward to Hannah and Luke P.ʼs one on one date! It starts off romantic enough, as Luke P. and Hannah walk hand-in-hand in a beautiful flower field next to a cliff. The picturesque landscape is perfect for a heart-to-heart conversation, but Hannah finds herself atop a cliff of frustration instead as Luke P.'s explanations are devoid of any kind of emotion or care beyond pride. I can empathize with Luke P. and understand that itʼs difficult to fight an uphill battle on public television while defending your character in front of the woman you feel strongly for, but I find vulnerability is the best way to truly come out on top, and heʼs outright refusing to be vulnerable with the woman he claims to be in love with. Sidenote: shoutout to Bill, who has a cameo in this episode as he talks through Hannahʼs troubles with her. Bill was my producer on the show, and he is an absolute legend.

The night portion of Hannah and Luke P.ʼs date seems to carry with it the same frustration. Looking at how the entire day has gone, I do feel that there was a tremendous amount of pressure on Luke P. to give some sort of answer or closure to Hannah. I feel like because he is someone that struggles with opening up, maybe approaching it in a different way would be best. Instead of putting all the pressure on him, asking him certain questions that force him to open up as opposed to pointing the finger may be a better approach.

I am just as frustrated as Hannah is, because I do see goodness in him — but Luke P. probably doesnʼt know exactly how to access that part of himself. I feel like Luke P. at his core probably has a lot to offer someone, but he has to evolve within himself to get to that place with a significant other. His future on The Bachelorette remains to be seen, as this episode ends in yet another cliffhanger, but judging by the sneak peek for next week's episode, it looks like thereʼs even more trouble brewing.

More like this
Jill & Jacob Split Up Right After He Hard-Launched Their Relationship On IG
By Grace Wehniainen
Victoria Fuller & Greg Grippo Addressed Their Relationship Timeline
By Grace Wehniainen
Kim K Reveals The Advice Demi Moore & Kendall Jenner Gave Her For A Runway Show
By Jake Viswanath
What Does The Royal Family Think Of Netflix's 'Harry & Meghan' Documentary?
By Jake Viswanath
Get Even More From Bustle — Sign Up For The Newsletter