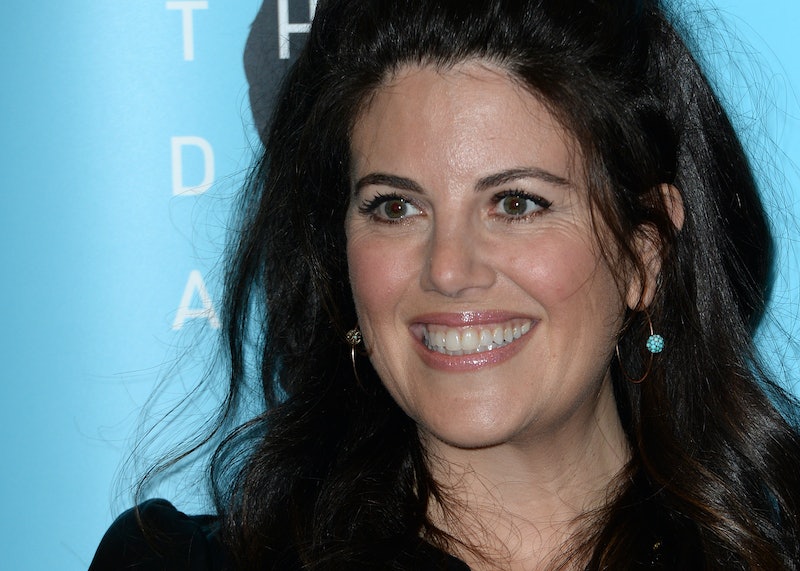 Despite the fact that Bill Clinton was married and the leader of the free world when he began his relationship with 22-year-old Monica Lewinsky, she has watched her reputation suffer far worse than he ever did. And he was impeached. For years after the "scandal," which Lewinsky's name is most often attached, she had trouble getting a job or even leaving the house. Now, HLN, a sister network of CNN, is airing The Monica Lewinsky Scandal and Lewinsky is taking issue with the title.

"Fixed it for you," the now speaker and anti-bullying advocate tweeted, along with an edited image of an article about the TV special, in which she crossed out The Monica Lewinsky Scandal and instead wrote, "The Starr Investigation" and "The Clinton Impeachment." Lewinsky has written before about the aftermath of her and Clinton's affair, saying she "was made a scapegoat in order to protect his powerful position."

It's not shocking to most women that Lewinsky would take the brunt of public scorn when it came to her relationship with the former president. And it's not shocking to Lewinsky, either. "I don’t actually know why this whole story became about oral sex," she said at an event in early 2001. "I don’t. It was a mutual relationship.… The fact that it did is maybe a result of a male-dominated society.” And she's right. The patriarchy contributes to the way we speak about men and women in relation to sex. Men are encouraged to be promiscuous, or at least not punished for it, while women are put down for expressing their sexuality.

Male-dominated culture also contributes to the way we talk about women and sexual harassment, absolving men of blame while centering women as the main subjects. "We talk about how many women were raped last year, not about how many men raped women," Jackson Katz said in his 2013 TED Talk, "Violence against women — it's a men's issue."

We talk about how many girls in a school district were harassed last year, not about how many boys harassed girls. So you can see how the use of the passive voice has a political effect. [It] shifts the focus off of men and boys and onto women.

Even after more than a decade of silence, it seems Lewinsky can't shake the media's portrayal of her as "That Woman," she wrote for Vanity Fair in 2014. "I was the Unstable Stalker (a phrase disseminated by the Clinton White House)," she wrote, "the Dimwit Floozy, the Poor Innocent who didn’t know any better." She finally decided to speak up because, she explained, "I am determined to have a different ending to my story. I’ve decided, finally, to stick my head above the parapet so that I can take back my narrative and give a purpose to my past."

By making a point to change the title of this upcoming special — which "features new interviews with former Clinton advisers, White House journalists, and other key players" according to HLN's release — Lewinsky is attempting to take back her narrative. This "scandal" doesn't belong to her. Their relationship was mutual, and Clinton wasn't impeached for having an affair; he was impeached for lying under oath.

"The Clinton administration, the special prosecutor’s minions, the political operatives on both sides of the aisle, and the media were able to brand me," Lewinsky wrote for Vanity Fair. "And that brand stuck, in part because it was imbued with power. I became a social representation, a social canvas on which anybody could project their confusion about women, sex, infidelity, politics, and body issues." But not anymore.

The Monica Lewinsky Scandal Taught Me A Lesson In Sexism