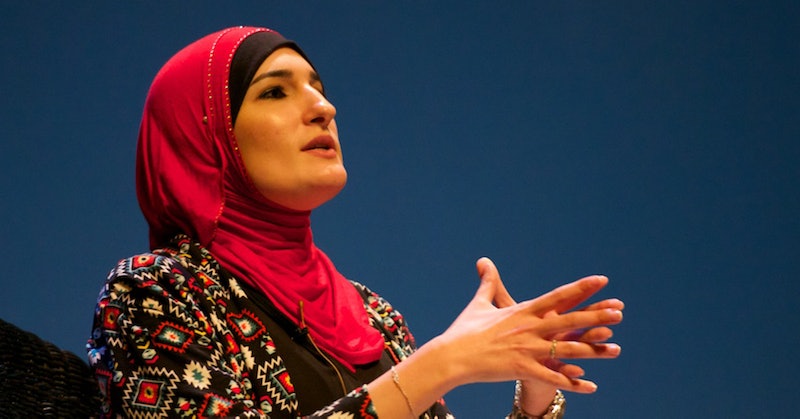 On January 21, 2017, Linda Sarsour addressed half a million people during the Women’s March in Washington D.C. Sarsour, a prominent activist within the Muslim American community and one of the national co-chairs of the Women’s March, describes herself as "unapologetically Muslim American, unapologetically Palestinian American, unapologetically from Brooklyn, New York.” She discussed the need to stand up for marginalized communities, stating, "I ask you to stand and continue to keep your voices loud for black women, for Native women, for undocumented women, for our LGBTQIA communities, for people with disabilities. You can count on me, your Palestinian Muslim sister, to keep her voice loud, keep her feet on the streets, keep my head held high, because I am not afraid."

As a hijab-clad Muslim American, words cannot describe the pride I feel when I see Sarsour spearheading the largest protest in United States history. A Muslim, a Palestinian, and a hijabi woman is representing our interests, sitting at the table for us, and including our communities in the conversation. She is showing the world that we are not just the minority: we are an integral part of the fabric of American society. Linda reminds us that despite the national tragedy that occurred on November 8, this is not the time to jettison our drives for social justice: Trump's victory should serve as an impetus for us to galvanize against forces that threaten to undermine our civil liberties. During a time in which many Muslim Americans feel that our identity is not welcome in this country, Sarsour is telling us that this is also our country — and we are here to stay.

Yet, after the march, Sarsour was accused of being anti-Semitic and of having ties to Hamas, an anti-Israel organization that the United States considers to be a terrorist group. Sarsour responded to the accusations, claiming that “the opposition cannot fathom to see a Palestinian Muslim that resonates with the masses.”

The criminalization and character smearing of influential Muslim Americans is nothing new. Jihad Watch regularly comes out with reports smearing prominent Muslim Americans, linking them to extremist ideologies and terrorist organizations. National Security Agency whistleblower Edward Snowden released documents revealing that the NSA had been spying on at least five prominent Muslim Americans; one had served under George W. Bush's administration, one is an attorney, two are professors, and one is the executive director of the Council on American-Islamic Relations, the largest Muslim civil rights advocacy organization in the country.

This unjust vilification of Muslim Americans has also certainly translated to Muslim American youth. In 2015, 14-year-old Ahmed Mohamed was escorted out of his high school in handcuffs after his teacher accused his homemade clock of being a bomb. Personally, I know few Muslim American kids who haven’t been accused of being a terrorist in school.

The accusations of Sarsour being anti-Semitic and associated with Hamas, on the basis of her Palestinian identity and her comments on Israel, are extremely disturbing, but again, nothing new. Sarsour has spoken out against the oppression of Palestinians in the occupied territories on a multitude of occasions. The fact that she is being linked to Hamas because of it is reflective of the conflation of anti-Semitism and anti-Zionism. In effect, it becomes scary to speak out against the Israeli government or the oppression of Palestinians without being accused of being anti-Semitic.

Palestinian Americans and Americans involved in Palestine-related activism must live with the ubiquitous threat of a character smear if they speak out against the Israeli government or the oppression of the Palestinians. For example, Canary Mission is a site committed to profiling individuals who have spoken out against Israel, particularly at academic institutions or in the media. There are a disproportionate amount of Muslim Americans and Palestinian Americans on the site. All it takes is someone speaking out against the oppression of Palestinians, or the use of a #FreePalestine hashtag, to be blacklisted on the site and be accused of hating Jews. It’s usually the first link that pops up when one Googles the blacklisted individual’s name; it surely affects employment opportunities, housing, and graduate school admissions alike.

It's smears like these that are exactly the reason Linda Sarsour and Muslim women like her need to be the face of the women's rights movement right now. As Linda said at the Women's March in Washington D.C., "If you aren't following a woman of color, then you are in the wrong movement." It is absolutely necessary for voices like Linda's to be elevated because Muslim women are among the most vulnerable in this administration, most at risk of being harmed by Trump's policies, and most likely to be victimized by the rash of anti-Muslim sentiment sure to be exacerbated when discrimination is sanctioned by the government. Their struggles are sure to be the greatest, and therefore their voices must be the most amplified in the resistance.

More like this
Chelsea Clinton On The Best Advice She Ever Got From Her Mom
By Brianna Kovan
The 20 Most Comfortable Pairs Of Underwear For Women
By Kristin Collins Jackson
The 5 Best Women’s Cashmere Sweaters Under $50
By Andrea Hannah
Amazon Keeps Selling Out Of These Trendy, Cheap Clothes With Near-Perfect Reviews
By Claire Epting
Get Even More From Bustle — Sign Up For The Newsletter