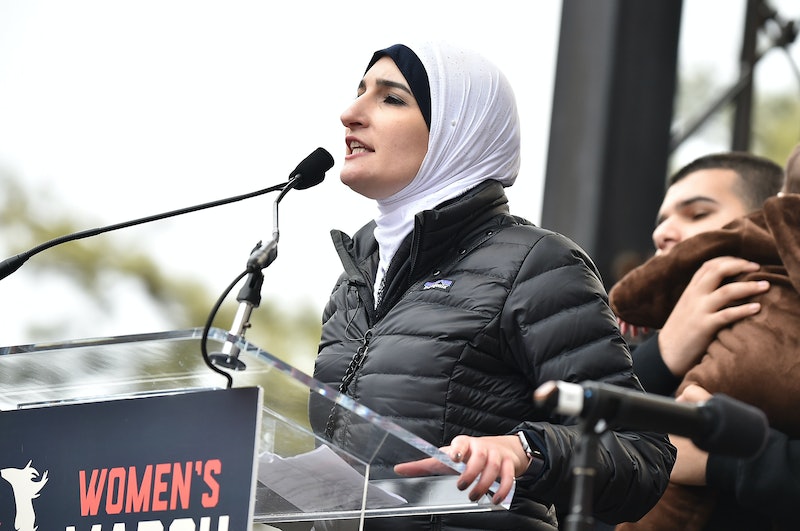 The worldwide protest that took place on January 21 has gone down in history as one of the largest demonstrations ever. Over 3.3 million people participated in the Women's Marches in 500 different cities across the country, protesting against all the ways the Trump administration threatens to rob us of our natural-born rights. Linda Sarsour, the executive director of the Arab American Association in New York and an outspoken Muslim-American feminist activist, was one of the four organizers of the Women's March on Washington. She worked tirelessly to put together the event that over 500,000 people attended, and she rallied the crowds with her speech about social justice and why she's protesting against the current president and his administration.

Sarsour was given a platform to speak yet again NYC's Washington Square Park on Wednesday, when people gathered to protest against President Trump's immigration policies and chanted, "No ban, no wall, New Yorkers for all." She reminded everyone that we need women of color (WOC) leaders now more than ever.

"If you're in a movement and you're not following a woman of color, you're in the wrong movement," she said.

Many people in the crowd cheered in response to these words, and many showed their support online.

However, some people fired back at Sarsour and accused her of dividing those who were coming to support the movement.

Sarsour's words couldn't have been more relevant and more true, but unfortunately, a lot of people completely missed the point. Any feminist movement that isn't being led by at least one WOC — if not several — is a movement that isn't worth following. For as long as women have been fighting for their basic human rights, WOC have been ignored, neglected, and mistreated to a degree that white women have never endured, and will never have to. To this day, mainstream white feminism fails to recognize these discrepancies, and as a result, minority women are left with no platform to speak up and demand change.

That's why Sarsour has made it her life's work to make sure no WOC is left behind in any feminist march. She's acutely aware of the systemic injustices WOC have to face, and she speaks out about them on a regular basis.

Women may earn 78 cents to every man's dollar (which in and of itself is an atrocious statistic), but according to the Bureau of Labor Statistics, black women earn 64 percent of what white men make, Hispanic women earn 54 percent, and Native American women make 65 percent. In general, WOC are more likely to work in hourly-rate, lower-paying jobs, they're not given as many shifts, and their work tends to be much more strenuous than white women. The American Association of University Women also points out that WOC will get paid less than white women with the same exact educational background. We need WOC at the forefront of our movement to make sure all women benefit from fixing the gender pay gap, not just those who are white.

In her speech at the Women's March on Washington, Sarsour also reminded everyone that however outraged you are by the Muslim immigration ban and the dehumanization of Muslims in our society, Muslim communities in America have been "suffering in silence for the past 15 years." As upsetting as it is for you to see Trump's administration make Muslims feel unwelcome in their home country, Sarsour wants you to know that all of this has been her reality for over a decade.

The same rings true for many other Muslims in America. The Southern Poverty Law Center reported in November that, since the election results, the number of hate crimes against Muslim Americans had unusually spiked. Within several days after the election, there were 437 recorded incidents around the country, even in places that were previously considered "Muslim-friendly." Muslim women — immigrants in particular — are constantly living in fear.

Now more than ever, we need WOC like Sarsour to lead us, to give us insight as to what minority communities need and demand in order to feel safe in America. Similarly, we must give black women, Hispanic women, Asian women, and Native American women the microphone, for they are the ones who will shed light on the cloaked injustices that permeate our society.

When Sarsour boldly proclaims that a feminist movement that doesn't include WOC leaders isn't one worth following, she isn't trying to divide anyone. She's actually doing the complete opposite

Sarsour wasn't among the initial organizers of the Women's March on Washington. The organizing committee was initially all white, but significant backlash against this lack of diversity led to three WOC taking on the role of co-chairs: Linda Sarsour, Tamika Mallory, and Carmen Perez. When WOC demanded to play bigger roles in the Women's March, they were blamed for being "divisive," though with Sarsour's experience — she once co-organized a 250-mile march from New York to Washington to rally against police brutality, is a member of an activist group called Justice League NYC that's committed to reforming the criminal justice system, and received the 2012 "Champion of Change" award from former President Barack Obama — her leadership should have been welcomed.

When Sarsour boldly proclaims that a feminist movement that doesn't include WOC leaders isn't one worth following, she isn't trying to divide anyone. She's actually doing the complete opposite. She's insisting that feminism in America be more inclusive, that WOC are given the space to fight for their communities' rights, because it's the communities of color that have the most to lose under the Trump administration.

It's predicted that Trump's proposed tax incentives and policies will only promote more gentrification of low-income neighborhoods and do absolutely nothing to address the lack of economic opportunity amongst communities of color. As we've been witnessing in the last few days, Trump is also using executive power to put a refugee ban into effect, denying thousands of innocent individuals from war-torn countries a safe place to live. Finally, getting rid of Obamacare would put disadvantaged communities, which are mostly made up of POC, at risk more than anyone else.

These horrors are just the tip of the iceberg. The communities that are anticipated to suffer most under a Trump administration deserve to have bold leaders at the forefront who will represent them at every turn. That's precisely why we need to listen to Sarsour's words. A movement without WOC at the center is "the wrong movement" because it's a movement that leaves marginalized individuals and communities behind in the dust. That's not to say that white activists can't comment on these matters and speak about them from a position of power, but it's unacceptable to think of a movement in which WOC aren't represented by WOC who look like them, who are from their communities, and who have had similar experiences.

Sarsour isn't asking that you choose her and her alone to lead the feminist movement. She's also not asking you to stop listening to white feminists like Gloria Steinem and Amber Tamblyn. What she is asking is that we make room for WOC to play just as important of a role as white women in this never-ending march against injustice. Because feminism will have a much bigger impact if every last one of us is heard.