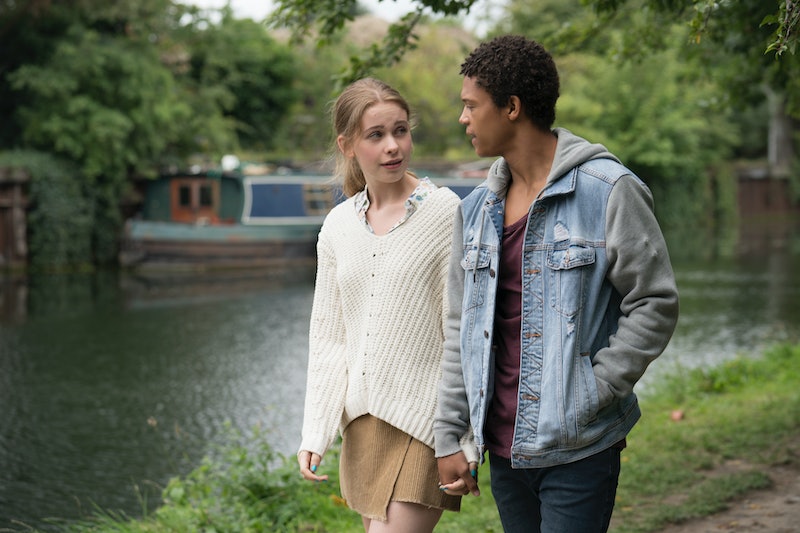 Science fiction has always had a problem with gender equality. Historically, the genre has been dominated by men — think of classic sci-fi writers, and the names that come to mind are H.G. Wells, Isaac Asimov, Jules Verne, Edgar Allan Poe, and Arthur C. Clarke, among many other males — but that's not for lack of interest (or trying) from women. But only six out of the 33 authors named Grand Master by the Science Fiction and Fantasy Writers of America are women, and female authors like C. L. Moore and Leigh Brackett wrote under male-sounding pseudonyms just to be heard. Thankfully, Netflix's new drama The Innocents is working hard to level that playing field by introducing a feminist hero surrounded by strong women in a story that is decidedly female-centric — and most definitely science fiction.

The Innocents (streaming August 24) stars Sorcha Groundsell as June, a young girl who decides to run away with her boyfriend Harry (Percelle Ascott) to both escape their repressive families and finally be together. But all their young-and-in-love dreams come crashing down immediately when, on the first night of their star-crossed road trip, June discovers she can shape-shift. That's certainly going to throw a wrench into her honeymoon plans.

But June's reaction to this shocking discovery — at first, confused and afraid but eventually strong and resilient — is indicative of the kind of woman she is growing into. When June's first transformation happens accidentally and she becomes a large, burly Scandinavian man, she's the one who has to calm down Harry instead of the other way around. June is the one to hold Harry while he breaks down, despite the fact that this bizarre condition is affecting her. That inherent strength is what drew Groundsell to to the role in the first place.

"She doesn’t ever become a victim to her circumstance. I think we need to see more of that in young, female characters."

"I don't think I have read such a completely, fully-fleshed out, interesting, three dimensional, complicated young female character in a really long time," Groundsell tells Bustle. "It just doesn't come up as often as you might hope. And I'd never done anything sci-fi before either, so I was really excited for the crazy sci-fi drama stuff that went along with it."

Groundsell soon found herself struck by how much she related to June — not because she could shape-shift, of course, but because of where they both grew up and how their respective pasts shaped them. "June and I have very similar — well, certainly not in terms of relationships with our families, but she's grown up in the middle of nowhere in the countryside in a very quiet peaceful existence, and that I really connected with," she says. "That was my experience as a child and I completely understand what that does to you when you're not surrounded by people and culture and life."

On a much deeper level than she initially expected, Groundsell empathized with June's "need to explore the world and see it for the first time."

"I shared that at her age for sure," she adds. "And I really admire her strength of character because she can't control this and it's frightening but she doesn’t ever become a victim to her circumstance. I think we need to see more of that in young, female characters."

But a strong female protagonist isn't the only reason why The Innocents is going to be your new favorite feminist sci-fi show. The story is "very much led and driven by women" in addition to June, according to Groundsell.

"In our show, the shape-shifting is treated as a medical condition that only women have," she adds. "The gene is passed down through generations of women so what we're seeing because of that is a whole host of not only incredible actresses doing amazing work but also very interesting female journeys."

Seeing a cast made up almost entirely of women who hold all the power in a sci-fi series is a cause for celebration for viewers. For Groundsell, being on set was emotional. "I certainly don't think I've been on a set where there have been that many women at the center of the story," she says. "It's an inspiring time to be a young woman in the industry — times have really changed very drastically over the last year, and in a way our show is the natural result of these changes."

Groundsell adds that this kind of show wouldn't have gotten made 15 or 20 years ago. "So the fact that it got made and company the size of Netflix wants to back it is a huge sign that not only have times changed but they're continuing to change and there is an interest for these types of stories led by women," she says. "It's not just guy superheroes that will make money."

As for Ascott, Groundsell's co-star, he is confident that The Innocents is going to be your new YA obsession. "Audiences are becoming more intelligent from past shows like Stranger Things and The Rain and Dark," he tells Bustle. "There is something about the YA genre in which you can use devices like shape-shifting to tackle issues that we go through in life. That fantasy and escapism is what audiences look for but ultimately the genre is changing, stories are more clever and there is so much out there that you have to dig deeper with characters and stories."

Citing superheroes once more, Ascott points out how Marvel films and TV shows are beginning to add layers of complexity to their previously indestructible characters as an example of how the genre is evolving. "You're beginning to see their weaknesses and the human aspect of these characters so we can relate to them," he says. "Even if the genre is far-fetched, it's grounded in the relationships between the characters, and that couldn't be more true for our series and these characters."

That's why Ascott knew he had to be involved in this series as soon as he finished reading the script for the audition. "I was really drawn to these young characters," he says. "Sometimes it's easy to not give young characters complexities they deserve and these characters have so many dimensions and layers to them. I became obsessed with the story and what happens towards the end."

Some of the shape-shifting scenes do get pretty wild, but Groundsell is proud of how The Innocents doesn't just present crazy sci-fi scenes for the sake of being sci-fi. "What the writers and creators were very keen on highlighting is the fact that the shape-shifting is a secondary element to the real human stories going on," she says. "The shape-shifting is a device to allow us to really explore the nature of these relationships and being young and growing up and finding your place in the world."

But at the heart of all the crazy sci-fi shape-shifting and allegories for deeper themes is the romance between the two main characters. June and Harry's love is one for the YA ages — it's sweet, all-consuming and, for lack of a better word, innocent ... at least, before their eyes are suddenly opened to the complications of life and the real world. "Seeing one human being merge into another human being, that's pretty surprising!" Groundsell admits. Regardless of how dramatic and shocking things get, Harry and June's relationship is the anchor that keeps them grounded throughout the whole series.

"Harry is the guy who would make the most noise in the room, but he's actually the loneliest. June helps him escape from himself, the Harry that's in pain and has to take care of his family," Ascott explains of their bond. "June frees him from all of that. And when June finds out she has this uncontrollable condition and has to accept who she is, Harry discovers that he has this ability to help her on this course of her journey of acceptance. They both give each other that sense of freedom and that's the most special thing about their relationship."

"It's what we all want to find at that age, isn't it?" Groundsell adds. "Two people finding each other and really being able to let go of any disguises they might be using to get through their young teenage life. They can be very real with each other, which is something they can't be with anyone else in their lives. That's such a pure connection. But maintaining that relationship in the real world is going to be difficult." Relationships are hard enough as it is, but add in shape-shifting, and all bets are off.