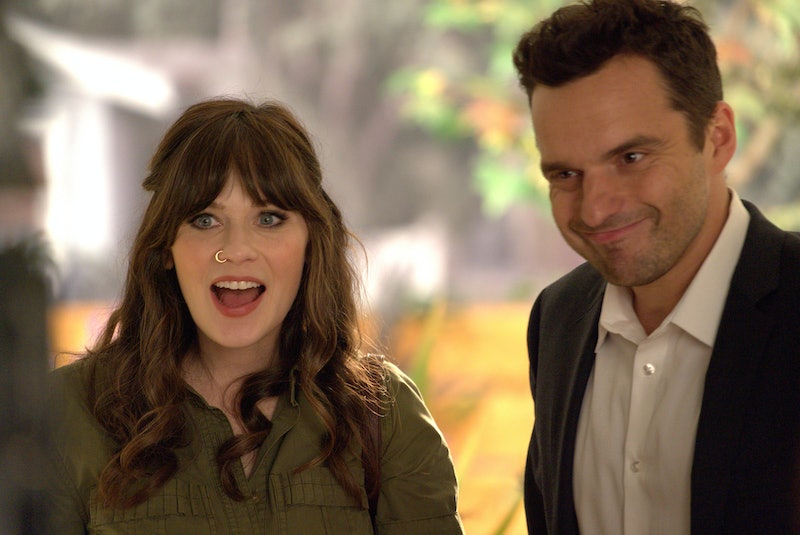 One of the most recognizable tenets of romantic comedies is the classic will-they-won't-they dynamic of a fan-favorite couple. Watching a relationship ping-pong between on-again and off-again only to end up together by the very end of a movie or television series is comforting and entertaining to watch. But it can also be a little predictable. So while we don't know if Nick and Jess will get engaged in New Girl Season 7 — diehard fans are hoping to see Nick (Jake Johnson) put a ring on it — star Zooey Deschanel is actually wishing for the opposite.

The star at the center of New Girl has played Jess for over 138 episodes, so no one is more of an expert on Jess and Nick's romantic history than Deschanel. She's seen the criticisms lobbed at New Girl when Nick and Jess first got together in Season 2, and how Season 3 suffered creatively as a result. With New Girl jumping ahead three years into the future at the beginning of the shortened Season 7, Nick and Jess will have made more progress in their relationship than ever before. But while the time is right for them to take the next step, Deschanel doesn't want to see them end up together by the time the series finale wraps.

"Honestly, no," she tells Bustle with a laugh. "I thought that it could have been cool to have a really sad, well not [a] sad ending, but more melancholy. Because why not? But I also love a romantic comedy and seeing people end up together, but if you're asking me personally, I like to leave people guessing with an ambiguous ending."

Even though New Girl has faced criticisms for pairing Nick and Jess in the past, Deschanel agreed with the writers that Nick and Jess deserved another shot at being a couple. "There are so many ways that this could turn out," she says. "Finding the more mature versions of Jess and Nick is an interesting way to go and something we haven't seen before. It's satisfying to watch because we've seen them be so immature in so many contexts. This gives them their last chance to get it right."

While Deschanel isn't able to reveal whether she got her wish of an ambiguous ending or if the audience members rooting for a Nick and Jess engagement will get their satisfying conclusion, she's relieved to finally play a more adult version of their relationship in the final season. "Nick and Jess are heading toward a possible commitment for the future," she says. "That's what this season is about. Everyone else has moved on their lives and Nick and Jess are still hanging in that will-they-won't-they. They're still dangling after all this time. So this season is really about Nick and Jess and their relationship."

Three years certainly is a long time in anyone's life, especially a TV character's, but Jess' romantic relationship isn't the only aspect of her life that hasn't gone anywhere during the time jump. "Jess hasn't really changed that much," Deschanel says. She's lost her job at the school and has just been traveling the world with Nick while he's gone on a book tour for The Pepperwood Chronicles. Meanwhile, everyone else from the loft has taken steps forward in their lives. Schmidt (Max Greenfield) and Cece (Hannah Simone) are raising their three-year-old daughter while Winston (Lamorne Morris) is now a detective and expecting his first child with his wife Aly (Nasim Pedrad).

With Jess stuck in a suspended animation in both her career and relationship, she'll need to make some changes in either aspect of her life. "Part of what's been interesting about and how we've created conflict is that Nick and Jess are stuck in their relationship, and that's why they're having trouble," Deschanel says. "But if they're moving forward with their relationship and taking these baby steps, in some small way, Jess is able to move forward in this last season."

While things are definitely changing for at least some of New Girl's main characters, part of the show's enduring appeal is just how much has stayed the same. The show is consistently funny and rewatchable, no matter what season it is. It's something Deschanel attributes simply to good chemistry, both between cast members and between the cast and the writers.

"It was really hard at first, we had very long days and the seasons were long but it was fun," she says. "We were having fun and making each other laugh and the scripts were funny. I just remember the first season, when we would make the crew laugh, that was so satisfying. Normally, everyone on the crew has been around the block and nothing is really funny to them anymore since they've done a million comedies."

These last eight episodes were a gift for Deschanel and everyone involved in New Girl, since many of them believed Season 6 would be their last. The writers crafted the Season 6 finale as a series finale, and a month after that finale aired, the series was granted a last-minute renewal for eight more episodes. "I have to say, I was really happy that we were able to do a final season knowing that it was the final season," Deschanel says. "That way we could say goodbye to the characters, wrap up storylines, see people we hadn't seen in a while."

"I feel good," she adds of how she feels now that she's done shooting the show. "It was bittersweet of course but at the same time, it was time to wrap everything up. It was perfectly satisfying for me, at least, as a participant." Fans will see soon enough if they feel the same.

More like this
Here’s Why Danny Masterson’s Hyde Isn’t In 'That '90s Show'
By Brad Witter
Nicole & Chris Hinted They’re Still Together After 'Married At First Sight'
By Brad Witter
The 'Teen Wolf' Creator Revealed If 'Wolf Pack' Takes Place In The Same Universe
By Grace Wehniainen
'The Crown' Season 6 Has Suspended Filming "Out Of Respect" For The Queen's Death
By Bustle Staff
Get Even More From Bustle — Sign Up For The Newsletter
From hair trends to relationship advice, our daily newsletter has everything you need to sound like a person who’s on TikTok, even if you aren’t.