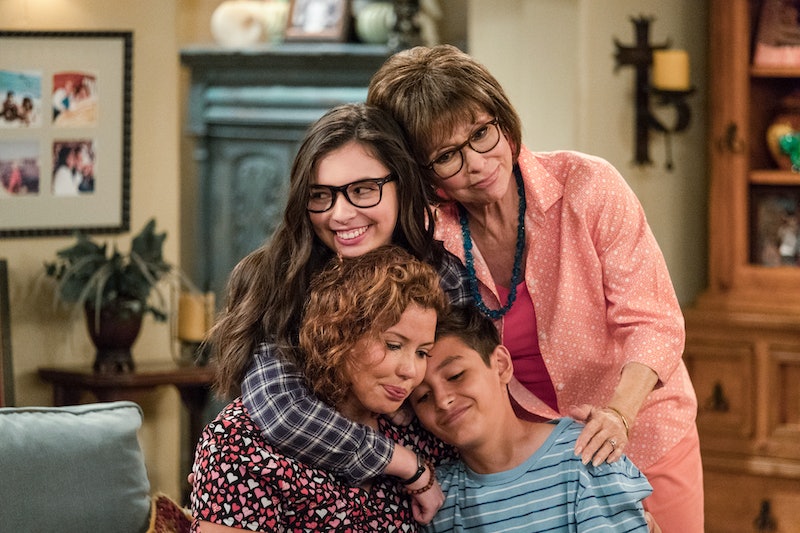 A year ago it seemed like there might never be a Season 4 of One Day at a Time. But when Netflix canceled the popular series about a Latinx family, the heartbreak of the cast and crew was matched by outrage — from fans, from critics, and even industry executives. “I knew the weight of the representation aspect of the show,” Gloria Calderón Kellett, the series’ Cuban-American co-showrunner, tells Bustle. “But to see so many people — not just Latino people — come out and give us love was very touching and something we're so grateful for.” Now, One Day at a Time is relaunching on Pop TV, the first instance of a streaming series being rescued by an old-school broadcast network.

ODAAT is a remake of the 1970s Norman Lear classic, but despite the breezy family sitcom DNA, the revival stands out for its cultural savvy and political ambition. Not that Calderón Kellett would describe the project in those certain terms. “It seems in this climate, especially under this administration, that being female and being Latina is political just by virtue of being, which is super strange,” she says. “But what we're trying to do is build bridges... We're trying to invite people into our living room and have a conversation with them about something.”

Bridges between whom? When asked, Calderón Kellett lists the same groups of people who find themselves at the center of American political conversation: “Specifically I would say, anyone who feels differently about immigrants, about people of color, about LGBTQ people, about women. Anyone who doesn't see us as an equal, important part of the fabric of this country and this world, those are the people I want to talk to.”

Of course, it’s hard to avoid politics right now. When we talk, it’s over the phone. Calderón Kellett has been social distancing in her Los Angeles home for the last 10 days in response to the spread of COVID-19. Only six episodes of Season 4 have been filmed so far, and her writing team has been collaborating on the rest over Zoom. It’s made her introspective. “I've been thinking a lot about the environment. There's meetings that I’m doing on Zoom that I can keep doing on Zoom,” she says. “There's no reason for me to drive and put gas and emissions into the air to drive across LA, when I could do this meeting via Zoom. I think that if we try to find the silver linings where we can amidst this awful thing, and come out of it a little bit better, then that's all going to obviously reverberate in our work.”

But while the writing can continue remotely, production is on extended hiatus. “We won't return until it is safe for our cast and crew. We have too many legends, like Norman Lear and Rita Moreno, that we have to keep safe — so we're taking it very seriously,” she says. In the meantime, the first half of the season is ready to go on March 24. Calderón Kellett would prefer to release it into a healthier world, but she’s willing to see the silver lining here, too. “There's a lot of people that are home that are desperate for some content, and certainly want to see something that's joyful. So, in that regard, I feel like we have a little bit of medicine that will make you feel a little better.”

More like this
Ozzie’s Coming Out Scene With Kitty On 'That ’90s Show' Has Twitter Sobbing
By Brad Witter
24 History-Making Black Women You Probably Didn't Learn About In School
By Ayana Lage and JR Thorpe
25 Inspiring Quotes From Black Women To Celebrate Black History Month
By Kyli Rodriguez-Cayro and JR Thorpe
The 'Freeridge' Cast Shared Their Hopes For A Potential Season 2
By Grace Wehniainen
Get Even More From Bustle — Sign Up For The Newsletter
From hair trends to relationship advice, our daily newsletter has everything you need to sound like a person who’s on TikTok, even if you aren’t.