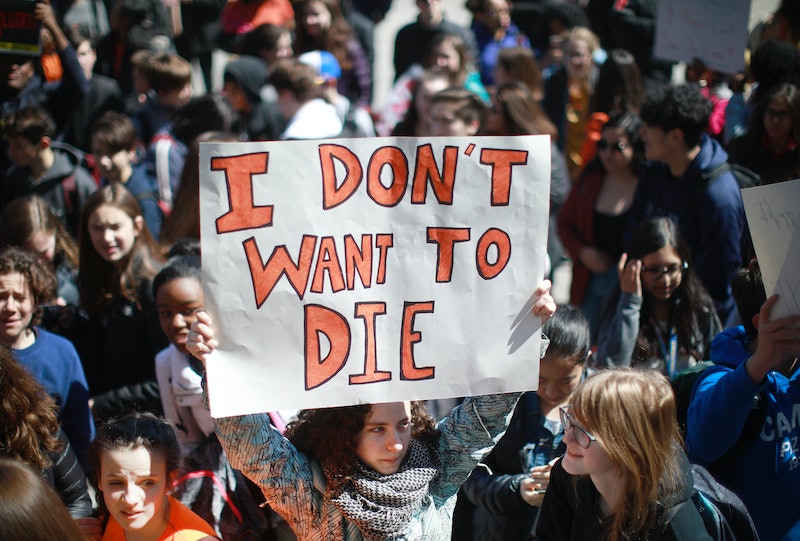 The purpose of National Gun Violence Awareness Day is clear: to gather together as many people as possible to combat the ongoing, tragic gun violence epidemic in America. What's less clear, though, is why the color for National Gun Violence Awareness Day is orange. According to People, it all goes back to an image that guns are naturally related to: hunters in the woods.

The movement behind this day began in 2013, when 15 year-old Hadiya Pendleton was fatally shot in Chicago, according to CNN. Rather than simply mourning her death, Pendleton's friends began wearing orange in order to commemorate her life and begin fighting to end gun violence in their own way.

"After we lost Hadiya, there were a lot of emotions going on," Nza-Ari Khepra, one of the founding members Project Orange Tree, the organization that Pendleton's friends started, told CNN. "The conversation motivated students and community members to get involved.

Project Orange Tree quickly became much bigger than a couple of friends wearing orange, however. Their "Wear Orange" campaign gained the attention of Everytown for Gun Safety, a gun control advocacy group that brought their cause to national attention. That boost allowed Project Orange Tree to call for the very first National Gun Violence Awareness Day in 2015.

Adopting a color as a symbol allows a movement like Project Orange Tree's to grow, because it's easy for people to join, show their support and spread the word through their clothes. And in Project Orange Tree's case, the color's connection to hunting clothes makes it quite a powerful symbol. Khepra explained to The Guardian why the group chose orange as its color, saying that hunters wear it to show that “they’re not the target and not to shoot at them."

“We didn’t want to be the next victims of Chicago’s gun violence,” Khepra told the Guardian, so members of the group started wearing orange to show that they were not the targets.

Now, the movement has truly spread across the country. Thousands of people will be wearing orange over the weekend surrounding National Gun Violence Awareness Day. Everytown is promoting the weekend as Wear Orange Weekend, and they've already had numerous celebrities join in the effort. Their website shows Keegan-Michael Key and Barack Obama with "Wear Orange" gear, and they're certainly not alone.

Actress Julianne Moore also partnered with the Wear Orange campaign. She spoke to People about her work with the campaign before National Gun Violence Awareness Day in 2017.

“This is not an anti-gun or pro-gun argument. It’s a safety issue,” Moore told People. “In our country, we have a right to bear arms. But we also have a responsibility to bear arms safely. With regulation, you reduce deaths.”

The movement's main goals aren't drastic, as Moore explained in the interview, but are instead small changes. A measure like closing the background check loophole would prevent people from buying guns without a proper background check.

"If we can manage to do that, that’s a pretty awesome thing and something we need to ask our legislators to do as well," Moore told People. "The Wear Orange campaign shows that you can make a difference."

Using orange as a symbolic color against gun violence has caught on beyond just Project Orange Tree. It was also the color that many students wore to the National School Walkout in March, according to CNN. There are lots of ways that you can work to end gun violence across the country and in your community — by calling your elected representatives, for example, or by voting in the midterms — but wearing orange for National Gun Violence Awareness Day is a good way to start, too.