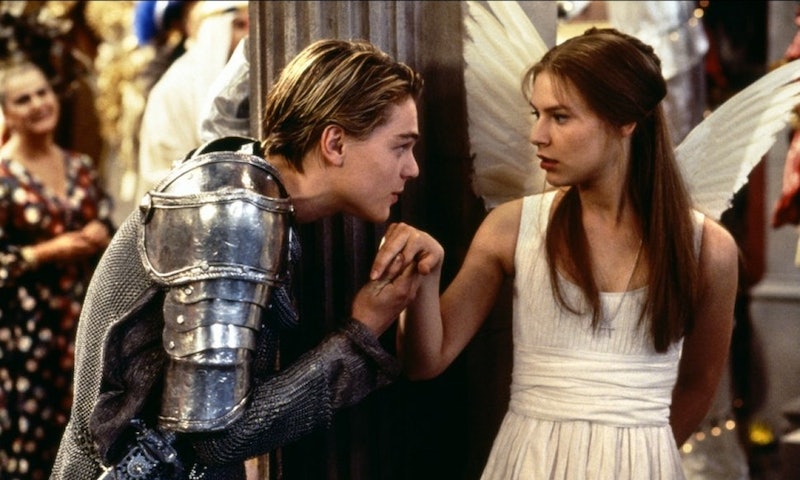 If you're ever looking for a healthy dose of cynicism, I highly recommend a trip to the Goodreads review page for Romeo and Juliet. You'll find a handful of Shakespeare nerds, to be sure, rhapsodizing over a beautiful, tragic love story. But you will also find a rich vein of vitriolic Romeo and Juliet hate. And I do mean hate. There seems to be a sizable portion of the population who feel personally victimized by the fictional, 400-year-old teens Romeo and Juliet.

According to these reviewers, the play is "a horror story for the parents of teenagers" and "all the characters act like idiots." The plot is "boring," "incredibly unrealistic," and "not a love story," Romeo is "a fickle crybaby" and Juliet is naive, too young, and "way too anxious to take her panties off." Modern readers are furious that these teenagers fall in love so quickly, furious that Romeo liked another girl before Juliet, and furious that the kids disobey their families in order to be together after meeting just once. The word "emo" is frequently employed.

They're not the first to hate on Juliet and Romeo, either. Samuel Pepys wrote that "it is a play of itself the worst that I ever heard in my life," way back in 1662. And yet, Romeo and Juliet remains one of the most popular plays of all time. It rivals Hamlet for Shakespeare's most performed piece of writing. It's frequently studied in schools, adapted into movies, musicals, and tweets, and read by teens and non-teens alike all over the world.

So why do people hate it so much?

To be fair to the fine people of Goodreads, most readers first encounter Romeo and Juliet when they're in high school. And very few high school teachers take the time to explain every single one of Romeo and Juliet's many (many) dick jokes, which is a shame. The language can be difficult for high schoolers who haven't seen or read much Shakespeare. Plus, relatively few hormonal teens are interested in having an adult painstakingly explain a story about hormonal teens to them. Much like with Twilight, it's easier to hate on Romeo and Juliet and the "silly," romance-obsessed girls who like it, than to defend yourself as one of those silly girls.

And let's be clear: it's OK if Shakespearean tragedies are just not to your taste. That's fine. What's strange, though, is that people seem to hate the characters Romeo and Juliet even more than the play itself.

Romeo is, canonically, a big mushy poetry bro. He opens the play moping over this girl Rosaline, pining and sighing and just generally being extra because she doesn't like him back. His friends ridicule him constantly for being girly and romantic, rather than being a cool dude bro like Mercutio or Tybalt who wants to FIGHT and come up with fun insults.

As soon as he meets Juliet, though, he forgets all about Rosaline—because yes, Romeo is a sap who's little bit in love with Love itself. But to him, Juliet is Love itself. A girl likes him back for the first time in his short, teenaged life, and suddenly he goes from writing sadboy poetry in his chemistry notebook to spouting love poems at the top of his lungs. Some people might call him fickle, but those people clearly don't remember the earth-shattering difference between staring at your hot, unrequited crush across the cafeteria and sharing a first kiss with some cute nerd who actually likes you back. That's a whole different ballgame.

Romeo is criticized by nearly everyone, including himself, for being "effeminate" and not manly enough. Even his readers seem to dislike him primarily because he prefers flowery metaphors to blood feuds, and because he's a boy who's all about the gushiest of gushy romance.

Juliet, on the other hand, is not exactly a simpering school girl. She's sharp. She's grounded. She's a little more sparing when it comes to metaphors:

That tips with silver all these fruit-tree tops—"

"O, swear not by the moon, the inconstant moon,

That monthly changes in her circled orb,

Lest that thy love prove likewise variable."

She worries that their timing is bad. She overthinks her own behavior, wondering if she should play hard to get or if Romeo really loves her or if she's talking too much or acting too weird or if this is really even happening. She's the one who immediately goes into scheduling mode and decides they should get married in the morning. And she's the one who gets a whole dang monologue about how freaking excited she is to have sex with Romeo.

As she waits impatiently for Romeo to come over, she fantasizes about "when he shall die" or "when I shall die" (it varies in different printings of the play), which seems like a morbid, hyper-dramatic line to a modern audience.

But for a Shakespearean crowd, to "die" was a very common euphemism for having an orgasm:

"Give me my Romeo; and, when I shall die,

Take him and cut him out in little stars,

And he will make the face of heaven so fine

That all the world will be in love with night."

Juliet has her moments of lovesick pining. But on the whole, Juliet is the more traditionally masculine of the two: she's more rational and less mushy, and she just can't wait to bone.

And if the "morning after" scene is any indication, she's pretty happy with her wedding night. Even today, we have precious few teen girl characters who get to be quite so frank and sexual.

But then, of course, things go sour for our star-crossed lovers. A lot of readers seem to think that Romeo and Juliet's love wasn't real because they would never have lasted as a couple in real life. To which I say... yeah, probably not, what's your point? The play is about first love cut short, not an essay on whether or not kids should be allowed to get married in high school.

Other readers declare that the play is a satire about fickle youth, or that Romeo and Juliet is a cautionary tale against love at first sight... so, essentially, these readers have sided with Lord Capulet, who berates his daughter and threatens to throw her out into the street if she doesn't obey him. Or they've sided with Juliet's nurse, who suggests in the end that it would probably be best if Juliet ignored her own feelings and just married Paris, rather than cause a big scene.

To be furious with two teens in love simply because they are teens in love, but to give a free pass to the many, many adults who fail them seems... odd? Why aren't people angry at the Friar, who's solution to everything is "eh, I guess fake your own death"? Why not be angry at the parents who've kept this feud going for no reason? Or at Mercutio and Tybalt, who think love is dumb and fighting is cool and manly? Or at the fact that Romeo and Juliet shows us a society where kids dying in the streets is more socially acceptable than kids consensually making out in the streets? Where young people are expected to die for their parents' grudges?

In short, you don’t have to love Romeo and Juliet. You’re allowed to roll your eyes at the very idea of young love, and to be a general anti-kissing curmudgeon. But let’s stop bashing Romeo and Juliet as a stupid story about stupid teens. Let's stop bashing sensitive, romantic young men and frankly sexual young women. And let's stop pretending that emotions like love and anger only "count" for fully fledged adults. Romeo and Juliet a story about young people whose parents would rather defend the violent status quo than listen to their children's feelings. And that, unfortunately, is a story we still need.