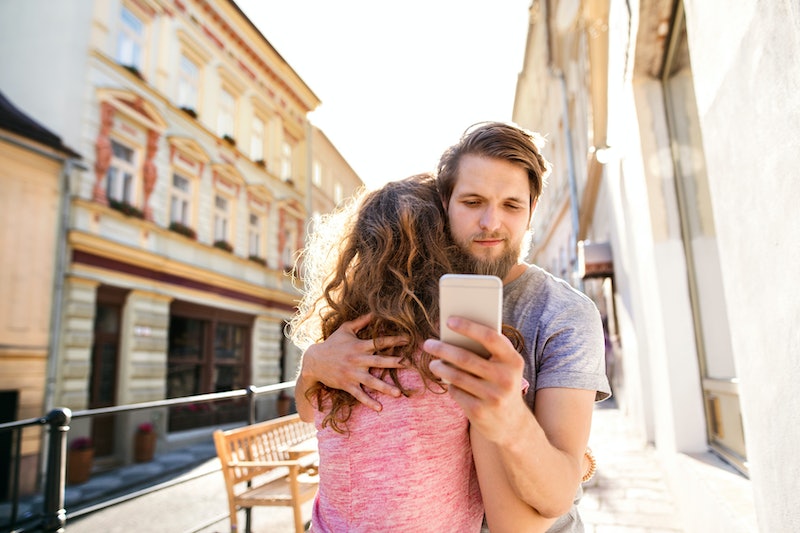 When it comes to bad habits, so many of us are guilty of spending too much time on our phone. And though we may know it's wrong, it's easy to end up "phubbing" other people. Basically, phubbing all boils down to ignoring someone right in front of you because you're too busy texting, scrolling Instgram, or checking your email.

Research has proved that phubbing is bad for your relationship in the past, but new research in the Journal of Applied Social Psychology shows that phubbing isn't just a relationship killer, it's a more basic threat to some of our fundamental human needs — not to mention it does some serious damage to the quality of our communication. Researchers Varoth Chotpitayasunondh and Professor Karen Douglas, of Kent's School of Psychology studied phubbing's effects on four fundamental human needs: belonging, self-esteem, meaningful existence, and control. And the results were worrying.

During the study, 153 participants were each asked to watch an animation of two people having a conversation — and they had to imagine themselves as one of them. Each interaction either involved no phubbing, partial phubbing, or extensive phubbing. And the more phubbing in the conversation, the greater the threat to their fundamental needs the participants felt. They also felt that the overall communication was poorer and the relationship was less satisfying when there was more phubbing.

Although they found that phubbing was bad for, well, pretty much everything, the results noted that it had a particularly negative impact on "the need to belong". It's not really a surprise, because phubbing has a way of making you feel immediately left out. And, as the study authors pointed out, phubbing is different to other form of social exclusion and isolation because it can be done so easily — and pretty much anywhere.

So what's the solution? "Try to cut back on using your phone gradually," David Brudö, co-founder and CEO at mental well-being and personal development app Remente, tells Bustle. "Try simply not checking it unless you actually need to use it. Or, leave your phone at home when you go out for dinner or grocery shopping. This way it will help you to change your habits in small dosages."

But what if you have a friend or a partner who phubbs you regularly? Here's how to deal with it.