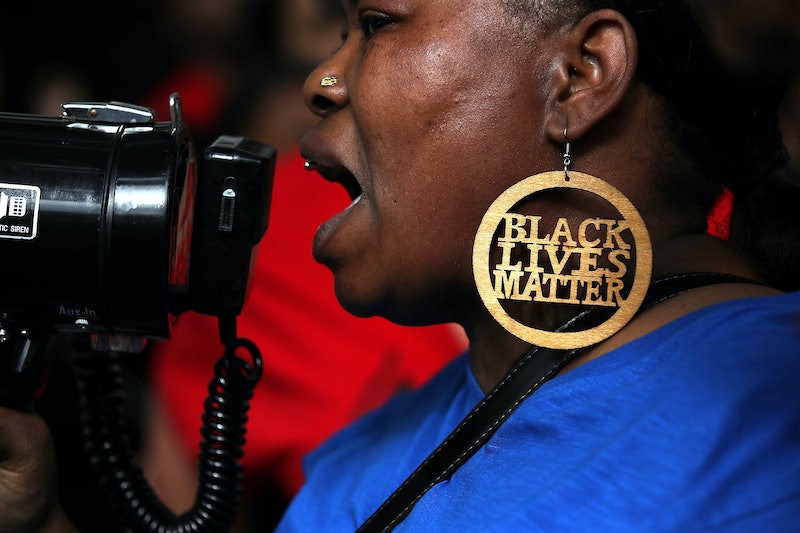 When white nationalists rally in Washington, D.C. this weekend on the anniversary of deadly violence in Charlottesville, Virginia, they'll likely be outnumbered by counter-protesters. Black Lives Matter activists organizing a "Unite the Right 2" counter protest aim to defend and uplift their communities on Sunday, which goes hand-in-hand with standing up to the very groups and systems they say want to oppress them.

"It’s important to make a stand," Makia Green, an activist with Black Lives Matter D.C., tells Bustle. "When people get into the streets, they’re letting people know: 'I am withdrawing my consent from a racist system that’s out to hurt people like me and people that I care about.'"

The so-called "alt-right" has fractured and weakened in many ways since Charlottesville. The permit request for "Unite the Right 2" anticipated roughly 400 attendees, while about 1,000 people are expected to show up for the "D.C. United Against Hate" counter-rally. Anti-racism activists may very well outnumber white nationalists gathering in front of the White House on Sunday, but they haven't been able to completely overshadow the message of "Unite the Right" in the past year.

"This rise in white supremacist rallies, the rise in hate crimes, with the current resident at the White House — there has been this constant assault on freedom, safety, and liberation of black people and people of color in general," Green says.

Last year's rally prompted calls to get rid of Confederate statues, yet the number of Confederate memorials is on the rise. And while the death of Heather Heyer, who was killed while counter-protesting in Charlottesville, caused a public uproar, the same group that organized the deadly demonstration was given approval to rally in D.C. on the anniversary of the violence.

Green, who's organizing a counter-protest called "Rise Up, Fight Back," says people should question why the National Park Service (NPS) granted initial approval for the rally after the city of Charlottesville denied the same request. The Trump administration's failure to condemn the white nationalist ralliers after Heyer's death last year bolstered their movement, and NPS' decision to approve an application to march this year gave it another public platform (a spokesman for NPS told The Los Angeles Times that the government does not “consider the content of the message presented" at a demonstration).

"It starts from the top. It's our president who’s giving them the voice to keep doing what they’re doing," says Nee-Nee Taylor, who's co-organizing the action with Green. "America’s just got to take a stand and try to get through these four years. Hopefully we can turn 180 back the other way... We just have to get our message out and say, 'No we don’t agree.' And that’s everybody who don’t agree, not just black people."

"If people stay silent about what’s happening, this just gives [white nationalists] more power to execute the changes they’re trying the bring about in America."

Just last week, a separate white nationalist protest in Portland, Oregon resulted in multiple arrests. Police at that rally deployed "flash bang" devices and pepper bullets in the direction of counter-protesters, according to local TV station KATU. One counter-protester told The Guardian that she was burned by a "flash bang" grenade.

The Black Lives Matter counter-protesters don't plan to threaten "Unite the Right 2" rallygoers. Still, given the violence seen in Charlottesville and at the white nationalist gathering in Portland last weekend, both Green and Taylor are worried about their safety.

"I’m worried about how 'Unite the Right' rally protesters will act in this space," Green says. "My biggest fear is how the police department will protect them and allow them to enact violence."

While NPS issued a permit to D.C. United Against Hate this week, which includes the Black Lives Matter action, a permit still hasn't been issued for "Unite the Right 2". Local police and organizers for the white nationalist rally were finalizing security plans as of Thursday morning.

Despite those safety concerns, Black Lives Matter protesters will be in the streets on Sunday to defend their communities, try to undercut the other side's message, and prove that D.C. isn't Charlottesville. They'll march in solidarity with the Shut It Down D.C. coalition and more than a dozen other activist groups that are planning to show up in full force.

"Silence is consent," Taylor says. "If people stay silent about what’s happening, this just gives [white nationalists] more power to execute the changes they’re trying the bring about in America."