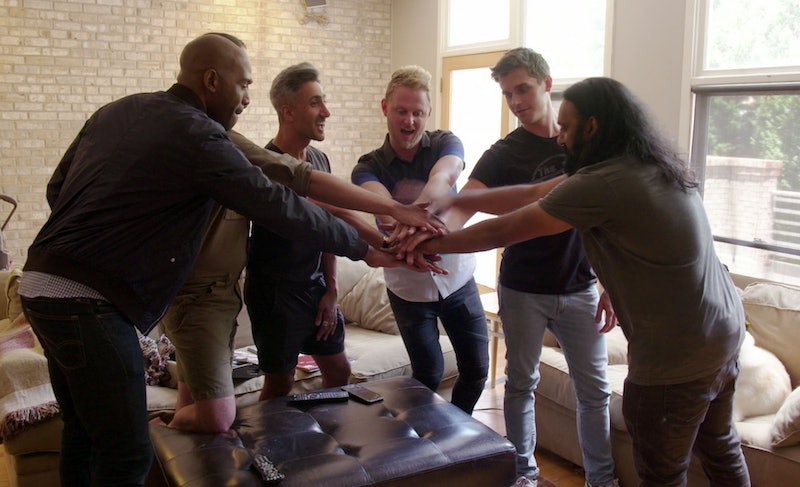 It's been a few weeks since Queer Eye took the world by storm, and Tan France is still reeling from essentially becoming famous overnight. The Fab Five's fashion specialist says he gets "literally" thousands of DMs on social media every day from people who really connected with the show, and then told all of their friends to watch, too. "I can't believe how big it got so quickly," France tells Bustle. "We thought it would be a slow burn but that's not the case, which is amazing." And the fire won't be dying down anytime soon: Queer Eye has already been renewed for Season 2.

In a time when reality TV feels like it isn't depicting much reality at all, Queer Eye is a breath of fresh air. As a reboot of the early 2000s Bravo series Queer Eye for the Straight Guy, it has an all-new cast, a new location, and a renewed commitment to giving a lasting makeover to its subjects' lives — not just a dramatic appearance change for the purposes of a show. France says this dedication to making actual changes with the "heroes" on the show was essential for him and the other four guys Jonathan Van Ness (Grooming), Bobby Berk (Design), Karamo Brown (Culture), and Antoni Porowski (Food).

"We do really care when we're helping people. We do want them to be the best version of themselves. We don't want them to turn into something else," France says, noting that despite his job being to revamp the guys' wardrobes, he's not the kind of person to shame someone for a perceived lack of fashion sense.

And that's the point. Queer Eye, at its core, is a nice show. It's the antidote to the often mean-spirited and cynical antics of other reality shows, and its relentless positivity feels sincere rather than cloying. That upbeat tone doesn't prevent Queer Eye from having frank discussions about everything from race, to religion, to coming out, to gay stereotypes, either, which is why France thinks audiences took to Queer Eye so quickly. "We hoped it resonated with people out there who are struggling with so many things, it's not just [a] gay thing," he says.

"I think we could do another 50 of these [episodes] and it wouldn't make the format stale ... you have a connection with every one of them."

Through the show's first season, the Fab Five are never treated as more important than the heroes they're working with, and some of Queer Eye's best moments have been when a member of the Fab Five has a tough conversation with one of the guys. Karamo Brown had a particularly eye-opening talk with cop Cory Waldrop about race relations, while Bobby Berk had a heart-to-heart with Christian Bobby Camp about how gay people are treated at church. And France, who is Pakistani, had a memorable interaction with Neal Reddy, who is Indian.

"I was kind of nervous about meeting him," France admits. "Indians and Pakistanis, I mentioned in the episode, historically we just don't get along. Actually the countries hate each other. They've been at war for as long as I can remember."

France notes that he'd never seen people from those backgrounds interacting in a positive way on TV, and it meant so much to him that he and Neal were able to discuss that and come to a place of understanding. "The fact that we had an opportunity to have a moment like that was amazing for us," he says. He and Neal are actually very close post-show, even though Neal's mom apparently jokes that she 'can't believe that a Pakistani boy is FaceTiming my Indian son.'

Neal isn't the only hero that France still speaks to. In fact, most of the Fab Five is in communication with the men whose lives they helped to change.

"We still keep in contact with almost everyone," France says, excitedly explaining that the heroes are all "shockingly" still taking his fashion advice. "I think that's the most surprising part of all of this," he says. "I think every one of them saw how massively improved their lives were with these changes that we made with them, that they're not willing to go back to their old life."

Neal, for example, texted him just that day with a picture of his outfit to ask for advice. "[And Cory], every time he goes to the store that I took him to, he'll screenshot and then text it to me, which is really cute," France says.

It all goes back to the idea of creating lasting change. The Fab Five wanted to positively affect these men's lives, and make it easy for them to replicate what they learned long after the show ended. It's why France fought to take Bobby Camp to Target to shop for clothes instead of a fancy boutique.

"You do start to make the show more accessible when you do something from that perspective," France says of thinking about what was cost and time effective for Bobby. "We show every man that's watching — or everyone, not just men — just because you're shopping at your local grocery store like Target doesn't mean you can't look fantastic — because, honestly, I think he looked fantastic."

That famous France positivity is apparent just from our phone conversation. He's earnest because he really wants these men to feel good about themselves. That attitude is sure to carry over to Season 2, which has already been shot, according to Variety. And France thinks the show can go on for much longer than just eight more episodes. "I think we could do another 50 of these and it wouldn't make the format stale," he says. "[Audiences] have a connection with every one of [the heroes]."

Audiences also have a connection to the Fab Five, who each bring something unique and important to the table — and who are all BFF IRL. France spends several minutes, in fact, defending Antoni — who has been the target of internet ribbing for allegedly "not knowing how to cook," since he made very basic meals during the episodes. (Although showing the men recipes they would be able to easily replicate is part of what makes the show realistic — hardly anyone would want to make a gourmet meal every night, and everyone loves guacamole, OK?)

"Antoni is an angel sent down from heaven to make this world better," France says adamantly. "I actually think he's the most compassionate of all of us. I think we do treat our heroes beautifully, but watching Antoni with the heroes sometimes makes me cry."

France says what makes Antoni a great cast member is that he immediately knew how to connect with the heroes — an important skill when you have only a handful of days to get down to the core of who they are. "I don't think the show would be the same without him. He's the heart and soul of our show," France says.

It says a lot that the "heart and soul" of the show is really just a person who is compassionate and kind and willing to connect with people. It's that energy that makes Queer Eye all the more real, and what has every fan eagerly awaiting the next eight episodes. This is the reality TV we need — a show about people helping to change other people's lives because they want to, not just because it makes good TV.

More like this
‘The Ultimatum: Queer Love’ Is Officially On The Way
By Radhika Menon and Kadin Burnett
Here's The Full List Of Zach's Confirmed & Potential 'Bachelor' Contestants
By Kadin Burnett and Grace Wehniainen
The Fashion Blogger Behind "Christian Girl Autumn" Just Dropped A Clothing Line
By Allie Fasanella
Filming For 'Bling Empire' Season 3 Picked Up Right After Season 2’s Drama
By Gretchen Smail
Get Even More From Bustle — Sign Up For The Newsletter