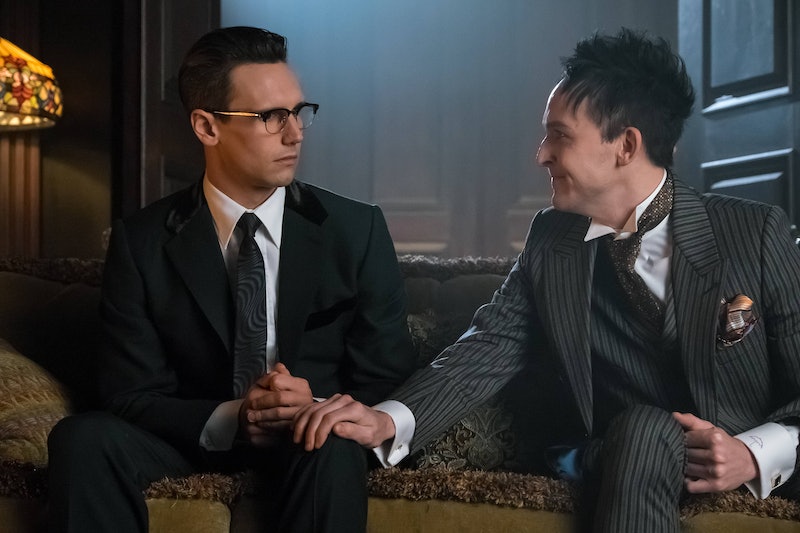 When it premiered in 2014, the premise of Gotham was easy to explain: the show is a prequel to the Batman mythology as comic book readers, animated series watchers, and moviegoers already know it. It's telling not just the origin story of Bruce Wayne's alter ego, but the origin stories of the theatrical, malevolent bad guys who'll plague his version of the city. And perhaps the most sympathetic downward spiral has been the transformation of umbrella boy Oswald Cobblepot into the criminal mastermind known as Penguin. Gotham added another step past the point of no return for Oswald this season when he was jilted (and nearly murdered) by Edward Nygma (Cory Michael Smith), who Oswald claimed to be in love with. For both characters to stay on their trajectory towards city-threatening super-villainy, they couldn't have a happy ending. Yet some Gotham fans cried "queerbaiting" on social media when the relationship was never consummated. In an interview at Bustle HQ, Robin Lord Taylor says that "queerbaiting" accusations "baffled" him. Homophobic backlash, he sadly anticipated. But not that.

"So, of course I expect 'f*ggot this' and 'gay that,' and 'they ruined the show,'" Taylor says. "We had a little of that. But on the other hand, I was not expecting on the progressive side of things, still that same exact insistence on putting people into a definable box — into a box that [viewers] can also identify with — as opposed to letting an experience happen."

Taylor is protective of Oswald, murderer though he may be, but more protective of presenting an authentic experience. As he talks about his character's romantic awakening and some fans' perception that the show had cultivated 'shipping via performative homosexuality with no intent of "following through," he leans forward in his chair and punctuates his words by lightly punishing the tabletop.

The criticism is especially frustrating to Taylor because since he heard from the writers that Oswald would be developing these feelings, he's taken an active role in helping the show tell a story that doesn't "ring false." When I ask him how he first reacted to the pitch, he chooses his words carefully and gives me the fears first.

"My big concern was like, OK so, this is the first time I’ve heard about any sort of alternative sexuality to Oswald, be it anywhere on the spectrum," Taylor says. "Even any mention of any sort of romantic interest. I myself am gay, so I knew that this is not going to be a traditional story of someone coming out of the closet."

While other Gotham baddies want power more than anything, power is just a vehicle for Oswald to achieve something else: validation and love. Taylor sees the former Gotham City mayor as a person who's "very emotionally, physically, sexually immature," possibly because his self-worth "has been beaten out of him" after years of abuse and ostracization.

"I wanted to be true to what I know and understand of human sexuality and it’s not that you" — he snaps his fingers — "wake up one day, and you are gay. And to say that you are gay means that you identify with a group of people; it’s a cultural thing," Taylor says.

For him, Oswald doesn't claim that orientation, nor any other. Taylor was determined to keep his character's discovery "a romantic, yearning need to connect with somebody" rather than strictly sexual interest, because Oswald's understanding of himself is so limited.

"It was the Riddler — the first person who showed any respect or understanding or even enjoyment of Oswald’s company," the actor says. "Who's to say that if it was Barbara that it couldn’t have been her? I wanted to keep that ambiguous. Because what I understand of my own personal experience being gay... this is something that I’ve been thinking about my entire life. It’s always been a part of my life."

Of course, Oswald's wooing of Ed didn't go exactly as planned. (Isn't it just like the Penguin to kill the competition to get her out of his way?) But Taylor says these two characters are inextricably linked to each other, even if Nygmobblepot 'shippers should get used to the idea that there's no white picket fence on the horizon.

"It's a one-sided romance thing, but in [the April 24 episode], it’s when the Riddler announces himself and he’s taking pills and he’s having hallucinations and he’s hallucinating Oswald and you can see in those exchanges — not romantically, he didn’t have that for Oswald — but there still was a love and a respect and a need on his part too to connect with him," Taylor says.

You'll remember that scene: it's where Ed has a vision of his old friend Oswald singing a sultry Amy Winehouse song. (They recorded his vocals, by the way, in the same studio where Winehouse laid down hers — an experience Taylor says made him ask himself, "What the hell am I doing?")

"If you watch it back and you notice: this is the first time you see Oswald in the traditional tux and tails and top hat, which is the traditional Penguin look," Taylor says. "And I love that he didn’t come up with that look initially. That was the Riddler. So it’s almost like Riddler created part of me. And they’ve created each other, there is no one without the other."

It's the coexistence of their kinship and their bad blood that make Riddler and Penguin quintessential Gotham bad guys. And that brings Taylor back to the misguided complaints that those crazy two kids just can't make it work.

"It’s never going to be the show where people live and fall in love and live happily ever after. This is a story about how these people become psychopaths," he says. That's the theme of the series for the actor: "What happens when love is ripped away? When the access to love or to be gentle or be respectful — when connection between two humans — when that is ripped away, what’s left after that? And in this case, this is how these people go from villains to super-villains."

It wouldn't be Gotham if it were populated with happy, fulfilled people. This heartbreak is bringing Oswald ever closer to the villain fans know from Bruce Wayne's canonical future, and his new alliance with Dr. Strange's "freaks" is a part of that. But in spite the vast range of reactions to Oswald's Season 3 arc, the actor is pleased that it provoked a reaction at all.

Even a heightened world like Gotham's can still have a lot to say about the world we live in, and Robin Lord Taylor is determined to keep it (close to) real.