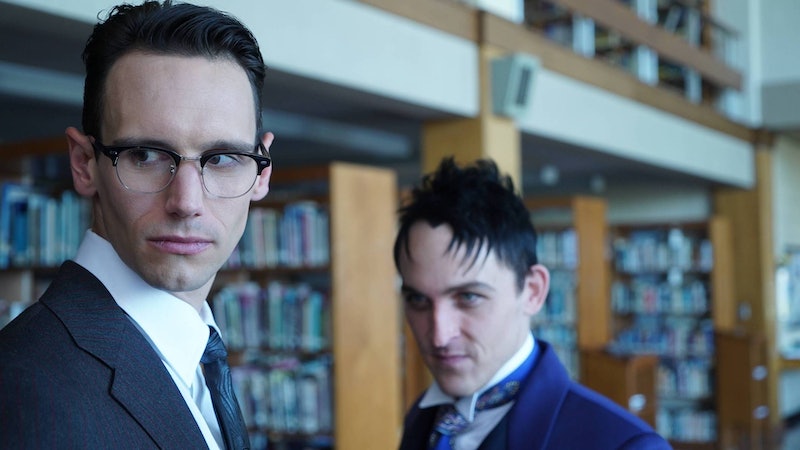 "Follow the White Rabbit" was an excellent episode of Gotham for one big reason: it made me feel confident that I'm not crazy. First, because when Penguin "confessed" his love for Ed Nygma (to an empty room, no less), I felt vindicated after their hug last week felt like a little more than the typical bond between coworkers. And second, because as soon as she appeared in the episode prologue, I found myself wishing that Kristen Kringle would return to Gotham — and return she did! Well, sort of. It made for a surprisingly exciting final few moments of the episode, for reasons that have nothing to do with the big Valerie Vale cliffhanger.

Because while Vale will likely live to flirt with Jim another day, I'm far more curious about what will happen when Ed shows up to Penguin's confessional dinner party gushing about how he met a woman who loves riddles and hates social niceties at the wine shop. I'm assuming poor Oswald will be crushed — or, that he'll take his own sense of rejection and act it out on another target, be it Ed, the woman he just met, or some innocent bystander (his newly introduced maid, perhaps?). That, or Oswald will just wind up hiding his feelings and try to ignore them, which would be painfully tragic fate, even for a supervillain.

Of course, the third person in this love triangle raises some big questions. Namely, was that really Kristen in the wine shop? Obviously, it can't be the same exact person who worked at the GCPD with Ed. He killed her onscreen, and then chopped up her body and buried it in the woods (after hiding her body parts all over the precinct as part of his psychotic break). Most of the dead characters who returned to Gotham this season have been brought back by Hugo Strange, but since Kristen's remains were never discovered (or so it seems), I don't know how she would've wind up at Indian Hill. It's possible that she has a twin or secret clone, but this doppelganger also demonstrated a familiarity with riddles, which suggests she knows about Ed's proclivities. And since Season 2 briefly introduced a Clayface-inspired shapeshifting villain, it could be someone assuming Kristen's face.

If Gotham wants to go ever darker, this storyline could lead to another spiral into madness for Ed. After all, when he wound up killing Tom and Kristen back to back in Season 1, it turned him into a complete villain and if he loses this version of her, he could suffer an even worse breakdown. Then again, Penguin's love could be exactly what he needs to avoid that happening again. There are a lot of ways this could go and though I'm not quite sure where this 'ship is heading, Gotham's new love triangle just kicked Season 3 into high gear.