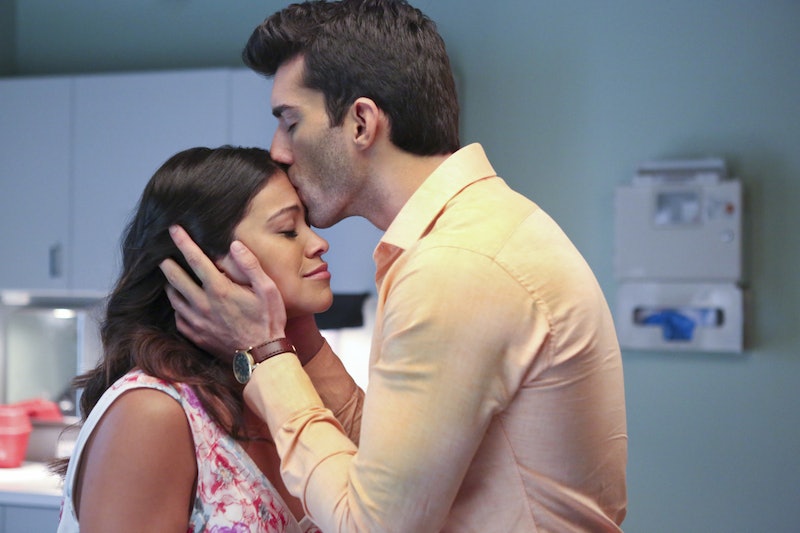 Jane the virgin is now Jane the widow. Throughout the series Jane's love life has been up for debate: Should she be with her longtime love Michael or should she end up with her baby daddy Rafael? Jane solves the problem by once and for all picking Michael, but, now that he is no longer in the picture, will Jane and Rafael get back together? The answer to the that question is easy: No, they shouldn't.

This is not because Jane and Rafael don't have passion. No one can deny that they certainly did. (Seriously, do you remember their first kiss? Yowza.) But, they're better as partners in parenting rather than love. These two have been put in an impossible situation, and they're figuring out how to make it work. This is something the show has done a good job showcasing since Jane got married last season.

Despite the fact that Rafael wasn't truly over Jane, he decided to keep that to himself on her wedding day because he knew that his feelings weren't worth making things weird. The fact that they share a son will always be the most important aspect of their relationship. When they look back at their first year of parenting in the Season 2 episode "Chapter Forty-Three," it's clear that they may share a love, but it's for their son. That's something even a heartbroken Rafael had to admit. Feelings change, and that doesn't have to be a bad thing.

Rafael and Jane's best moments are when they're trying to figure out what's best for Mateo, whether it's choosing a pre-school or figuring out how to make joint custody work. Jane and Rafael represent a new kind of family, one that often goes ignored by Hollywood. It's not your typical family tree, but Jane The Virgin shows is that love comes in many forms. To put Rafael and Jane back together takes away from what they've made so clear: there is more than one way to be a family.

Putting the couple back together also forces Jane to go back when she really should be moving forward. It also seems out of character. Jane is someone who always puts her son first, and it's hard to believe that she would be worried about starting another relationship, even three years after Michael.

Showrunner Jennie Snyder Urman told Entertainment Weekly that Jane's loss would be a catalyst, but it probably wouldn't be for love. "I felt like she had everything worked out, and this event, again, changes everything and leaves people in different places," she said. "And gives our character a lot of room to learn and grow and change."

That room shouldn't be one occupied by Rafael. Instead, it should be a room all Jane's own where she can be the strong, independent women she's always been. Too often shows resort to taking their strong female characters and forcing them into relationships as if their own stories aren't enough to keep us watching. Jane The Virgin has never been that show, though, and they shouldn't start now. Watching Jane deal with being a single mom is an inspiring story that should be told. Jane can do this on her own, without Rafael or any man. Here's to hoping the show realizes that, too.