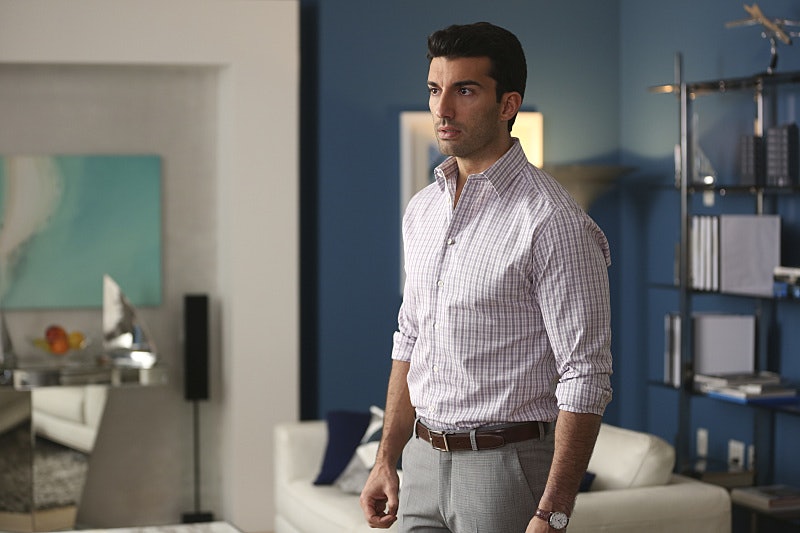 If you were hoping that the Jane the Virgin Season 2 finale was going to end without any drama, then clearly you haven't been paying attention these last two seasons. Drama is what this show thrives on, so you can expect there to be a few surprising twists and turns before the hour comes to a close — one of which includes Rafael's declaration of love to Jane on her wedding day. Will it be enough to make her change her mind? Could Jane and Rafael still end up together? In an interview with Bustle, Justin Baldoni, who plays Rafael, provided a few juicy Jane the Virgin finale spoilers about his character's big moment and suggests that fans may want to have a box (or two) of tissues at the ready.

"I think you should [have tissues ready]," the actor teases in reference to his wedding day confession to Jane. "I think that moment is one of my favorite moments that Rafael has had so far, so I'm really excited for everyone to see that moment and what he does with it. That's all I can tell you." And while we'll have to wait and see for ourselves what Jane's response to his heartfelt speech will be, Baldoni thinks that if Jane and Rafael were to give it another shot in Season 3, they are in a much better place to make it work this time around.

"I think if that's where the story led, I think they've both grown a lot," he shares. "But it's hard. She is in love with somebody else. You're not just going to cut off those feelings. I don't know if it's possible right now, but I think everyone has matured on the show and Rafael has had his fair share of crap to deal with and I think that every time he deals with something really intense he gets a little more mature and it's fun being able to play that."

Even the most hardcore Team Michael supporters can't deny the beautiful, heartfelt moment Rafael and Jane shared together while reflecting back on their first year as parents. Granted, it may not have carried the same romantic impact for Jane that it clearly did for Rafael, but there's no denying that these two share a very special bond — one that can't be ruled out even with a wedding on the way.

That being said, I'd be amiss without mentioning Petra in all of this. Despite how she tries to deny it. she still has strong feelings for Rafael. But even though he only has eyes for Jane right now, Baldoni warns viewers to not be so quick to write off a reconciliation between these two. "I think it's a telenovela so there's always hope for everybody," the actor reveals. And really, no truer words could be spoken.

And as for what team Baldoni himself roots for off-screen? "I'm Team Mateo and Team Anna and Elsa," he assures us. Spoken like a true parent!