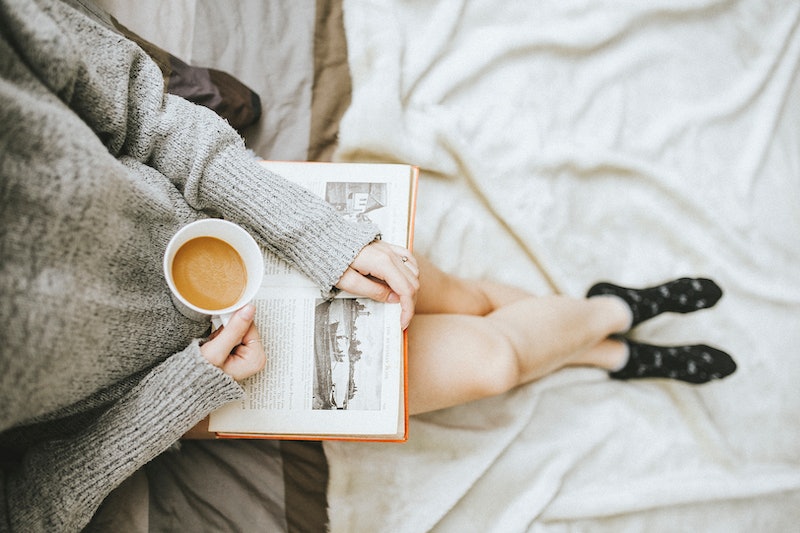 As an avid book-lover, I can tell you first hand that there are literally dozens of reasons why reading is the best pastime: it's fun and entertaining, inspiring and educational, exciting and relaxing all at once. But beyond my own anecdotal evidence, there's one major reason why reading really rocks: readers are more thoughtful people, according to science. If you've ever known a bookworm, you probably knew this to be true already, but now, there is proof that your bibliophile BFF truly is the best.

According to a study conducted by postgraduate research student Rose Turner at Kingston University in London, readers are actually nicer people. In an anonymous survey of 123 adults, Turner asked participants about their entertainment preferences for books, television, and plays, while simultaneously testing them on their interpersonal skills, including their ability to consider others' feelings and their likelihood to help those around them.

The results showed that readers were actually more empathetic towards others than those participants who said they preferred television to books. According to Turner, book-lovers' advanced social skills are a result the powerful experience of walking in, and trying to understand, a character's shoes.

"When we read we go by what is simply written on the page and we have to fill in the gaps as we go along, giving us a chance to develop empathic skills as we try to understand what a character is going through," Turner says. "Whereas when we watch something, we are provided with a lot of that information already."

Turner's recent findings were not the first to prove that readers are the best kind of people. A 2009 study conducted by Raymond A. Mar, a psychologist at York University, and Keith Oatley, a cognitive psychology professor at the University of Toronto, found fiction readers have more empathy than both nonfiction readers and non-readers in general. They cite a greater "theory of mind," or the ability to hold and understand opinions and beliefs other than one's own, as the main reason.

Essentially, by exposing themselves to diverse experiences of others through books, fiction readers develop the skills to think about, understand, and even adopt other ideas without losing sight of their own. That in turn makes them more understanding of the people around them, despite their potentially dissimilar beliefs, interests, or experiences.

In a similar study, researchers at The New School in New York found that literary fiction in particular increased a reader's capacity for empathy and understanding others. Over the course of five different studies featuring between 86 and 356 individuals, social psychologist Emanuele Castano and PhD candidate David Kidd gave participants different kinds of reading excerpts across three main categories: genre fiction, literary fiction, and nonfiction. After reading from these categories, or in some cases after reading nothing at all, participants were tested on their ability to interpret other people's emotions and thoughts.

While the results were insignificant between non-fiction readers and those who read nothing at all, the study found that participants who read literary fiction had a much higher capacity for empathy than those who read genre fiction. The findings validated what many had already believed to be true: literary fiction's focus on character development over story plotting can actually give readers a deeper understanding of not just the people in the book, but humanity as a whole.

Being empathetic isn't the only reason readers are more thoughtful people. In another study conducted by the National Endowment for the Arts, researchers found that people who read regularly are more engaged in their communities. According to the findings, literary readers are over twice as likely to engage in philanthropic activities than non-readers.

Across every demographic, which accounted for different ages, genders, ethnicities, education and income levels, literary reading increased a person's likelihood to volunteer by up to three hundred percent. The study also found a correlation between the number of books an individual read and the frequency of their charity work: volunteer rates went up with the number of books, both literary and nonfiction, read in the last year.

The study suggests that, through reading, individuals are exposed to a wide variety of stories that highlight the many social and civic struggles facing people around the world. That exposure helps make readers aware of the real life problems facing their own communities, and increases their desire to improve them.

If you consider yourself a bookworm, none of this will come as a surprise to you. You already know firsthand how magical reading is, but now, thanks to science, you can finally prove to your friends that you are officially the nice one of the group.