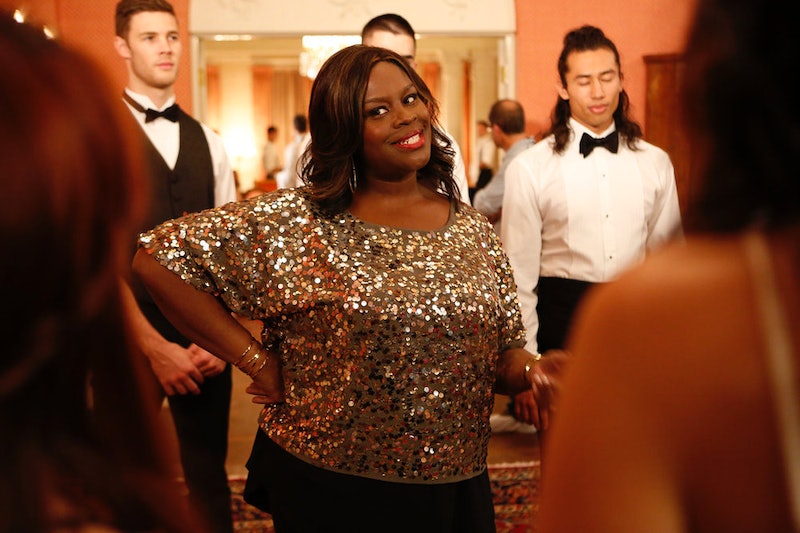 Women are complicated and so are their friendships with other women. Unfortunately, a lot of times neither are realistically portrayed on television. But, thankfully, that can't be said for Bravo's scripted series Girlfriends' Guide to Divorce. Currently in its third season, the series is all about presenting multi-dimensional women leading complex lives in their careers and as wives, divorcées, mothers, and, of course, friends. Those elements are why one of the show's stars is so proud to be part of the drama. "I appreciate [the focus on female friendship] and what I also appreciate is when they portray the women fighting, they're real," Retta, who plays Barbara on Girlfriends' Guide to Divorce tells Bustle over the phone.

The portrayal of women's friendships is something she also admired about a particular HBO dramedy. "I used to like that about Sex and the City, because we do fight with our friends and you make up because you love them."

Retta's character knows a thing or two about arguing with her friends, specifically Lisa Edelstein's Abby. Ever since they met in Season 2 as co-workers, Abby and Barbara's work relationship has developed into a friendship. And their friendship certainly isn't without disagreements, which is something all friends experience at one time or another.

"I've had some fight scenes with Abby and I really appreciate them, because you can show that you can have conflict and still come back around and be friends," the former Parks and Recreation star says.

Far too often women are pitted against each other and portrayed in ways suggesting that women can never be friends, because they are catty or fighting over a man, among other ridiculous reasons. Do women argue? Absolutely. But as Retta points out, it's just as normal for female friends to make up as it is for them to fight.

Abby and Barbara will continue to show their complex friendship throughout Season 3. While chatting with Channel Guide magazine in January, series creator Marti Noxon said Abby and Barbara are basically the main couple this season. "Throughout the next however many episodes, in some ways, Abby and Barbara become kind of our primary couple — our non-romantic couple,” she revealed.

I asked Retta to expand on Noxon's tease, and she says the reason why Abby and Barbara are like the "primary couple" is due to Abby going through her divorce from Jake (Paul Adelstein), despite the two trying to reconcile in the second season. "I think because Abby is going through her divorce, so it's still a little weird and touchy, you know, that's not her main thing," Retta explains. "They're going through a divorce for a reason, so having Abby have a relationship with Barbara, it gives her something to concentrate on, to feed [her] soul."

Retta feels that friendship is one of the most important things to have when enduring a rough time, like a divorce. "Having your friendships are like your safety net. I feel like I was kind of a safety net for Abby," she says. "It was someone she could tell her feelings [to] and just be honest about herself or [to] have me put a mirror up to her and be like, 'You know you're being crazy, or you know you're not being nice or whatever.'"

That is one of the many reasons why Retta's character inspires viewers. Barbara is not only a cool and confident single working mother, but she is honest and loyal to her friends. Playing Barbara is something Retta welcomes with open arms, not just because she is multi-dimensional woman, but also one who represents humanity.

"I gotta say, it's nice," the 46-year-old says about taking on such an influential role. She adds,

"And generally when I read parts and read different characters, you try to find the humanity in the character that you're reading, because you want to play a real person. So the fact that people appreciate the person or looks up to them, it's just a bonus. Because, you know, people play villains and all kinds of things, but they still have to try to find that humanity. To actually have people want to be or emulate a character is just a bonus."

Girlfriends' is one of the few series with a main cast of women, who are showing what the life of a woman can really be like. From divorce to relationship problems to trying to be the best parent you can be to finding your ground in the workplace, the Bravo drama does a great job at showing the complicated lives of women.

The way female friendships are portrayed is an added bonus. Just like with Sex and the City in the past — and some of the other great women-focused shows that have come since — it's a wonderful feeling to be able to sit down with your girlfriends and enjoy a realistic series that promotes female friendships in a positive way.