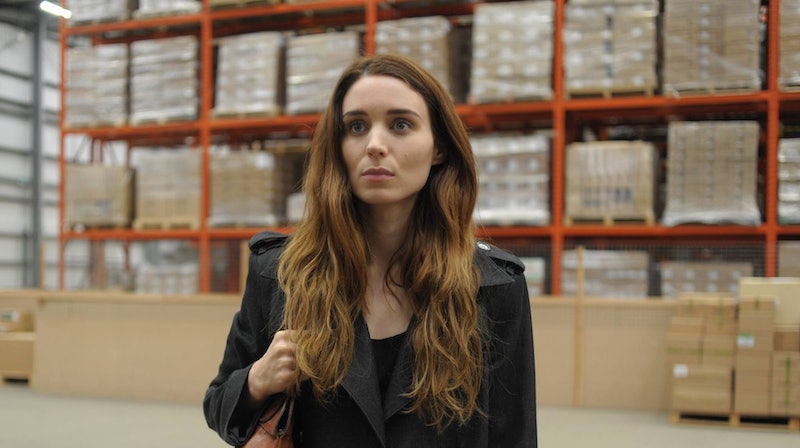 A new year means a new list of highly anticipated movies you need to see and Rooney Mara's film Una is definitely one of them. The plot of this film — which will be released Jan. 19 internationally but doesn't have a U.S. release date as of yet — seems simple: a young woman named Una (Mara) makes an unexpected trip to an older man's workplace in hopes of finding answers to her past. But her past is also his, and it's one that includes an abusive sexual relationship that ended 15 years earlier. Una is a survivor who, now in her late-20s, is looking to confront the man, Ray (Ben Mendelsohn), that took advantage of her when she was too young to understand the difference between abuse and love. This movie, as made clear by its title, is looking to focus on Una and the effect the relationship had on her in the years since. She hasn't triumphed during this time, but instead has suffered quietly. On this day, in this movie, she gets to tell her own story.

As the film's trailer lets us know, Una has been "adapted from the play that shocked the world." That play is Blackbird, written by David Harrower, who also wrote the screenplay for the film. The play takes place in one room, the break room at Ray's job where Una is looking to solve the mystery of why he chose her. Adding to the drama is the fact that, outside the door, the work day goes on.

The film follows that same structure, with Una forcing Ray to answer her questions or risk having his cover blown. "You were my neighbor's daughter," Mendelsohn tells her in a whisper in the film's trailer. "Not a target."

Una is also not looking to target him in this thriller; she's just looking to take things into her own hands. She's seeking her own kind of justice, but it's unlike the kind viewers have seen in revenge thrillers like 2005's Hard Candy that cover this same territory. In that film, Ellen Page plays a 14-year-old girl who stages her own sadistic version of To Catch A Predator. Una doesn't use guns or knives to inflict pain on Ray; she uses only her words to break him. This isn't a revenge tale, but a story of compassion.

Una has been labeled a victim since she was a young girl and that has followed her through her life. Her family has shunned her, and her community looks at her like she's damaged goods. She's been forced to suffer alone for this unsolicited relationship while Ray was able to move on with his life. Now, she's shown up at this man's job to let it all out, to talk about the pain and shame she was left with.

Una is a movie that's looking for answers to the tough questions surrounding sexual abuse that lead to even more difficult conversations. It's looking to giving the victim a chance to get the answers she needs to become a survivor, to finally have a chance to move on with her life. She is taking back her story.

There is a twist in Una's case: hers was reported, and her abuser went to jail. But the movie questions what happens when that isn't enough, when that doesn't make things better. There's no denying this is a difficult story to watch unfold, because it's an unconventional one that truly looks at the toll sexual abuse takes on the one who is abused. But, as tough as this story is, it's an important one that gives the "victim" a chance for closure — even if it's not the kind of closure one would expect.

More like this
Sandra Bullock, Girlboss Extraordinaire
By Matt Harkins & Viviana Olen
Lisa Marie Presley Reviewed Baz Luhrmann’s ‘Elvis’ Movie On Twitter
By Grace Wehniainen
9 Honestly Unbelievable Revelations From The WAGatha Christie Trial
By Frances Stewart
Twitter Can’t Get Enough Of The WAGatha Christie Trial
By Nola Ojomu
Get Even More From Bustle — Sign Up For The Newsletter