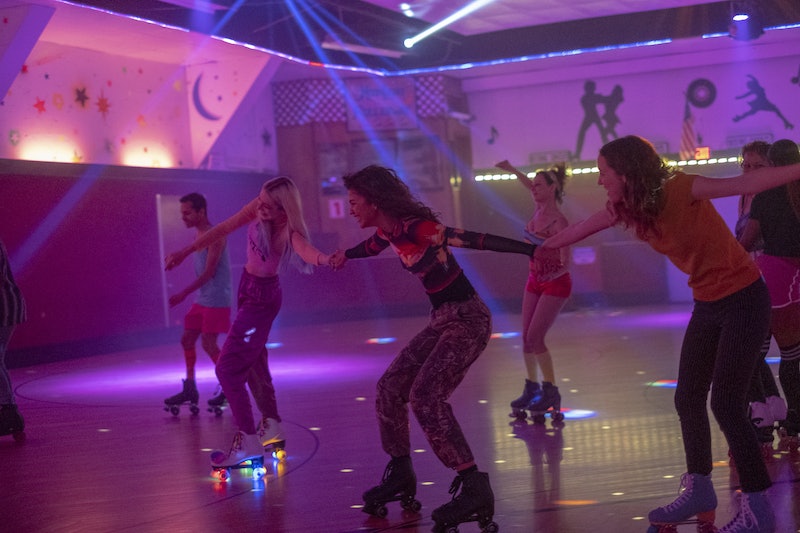 Spoilers ahead for Season 1, Episode 6 of Euphoria. Euphoria's July 21 episode is all about relationships breaking down. Nate and Maddy continue their abusive cycle, Cassie struggles to connect with McKay, and Rue begins to realize Jules may not feel the same way about her. But in contrast, Rue and Lexi's relationship reveals itself to be the kind of genuinely healthy and fulfilling 'ship both Rue and fans are looking for, whether the two remain just friends or become something more.

"I have no joy of this contract tonight. It is too rash, too unadvised, too sudden, too like the lightning, which doth cease to be," Jules recites to Rue from the pool at Daniel's Halloween party, much to Rue's confusion. It's a scene from Act II of Shakespeare's Romeo and Juliet, where Juliet, although flattered by Romeo, finds his sudden proclamations of love for her totally irrational. She essentially rebuffs the idea of them being a couple so soon, in the same way that Jules feels uncomfortable with the intensity of Rue's love for and reliance on her.

As Rue remains firmly on the ground, Jules floats away from her, both literally and metaphorically. Rue may not understand the significance of Jules quoting Romeo and Juliet, but she does see that their romance was likely doomed from the start. Jules has her own problems to deal with, and she can't be fully present in the way Rue wants.

This episode is heavily extra-textual, with pop culture and literary references providing commentary on each character. We see this most clearly in the teen's costume choices. Nate is a jailbird, Cassie is a former prostitute from the 1993 film True Romance, and the handsome but actually toxic Daniel is Ted Bundy. Jules is an angel — intoxicating and otherworldly to Rue, but ultimately removed from her in a way that is totally counterproductive to Rue's mental health (which to be clear, is for good reason: Jules is being blackmailed by Nate, and feels she can't fully confide in Rue anymore.)

In contrast, Lexi is Bob Ross, and she's basically been embodying the calm and supportive PBS painter this whole time. "Bob Ross as self-care" is a real thing that millennials and Gen-Zers practice, and it's revealing that Lexi chooses Ross as her Halloween persona. While Jules this episode is a whimsical, mercurial figure to Rue, Lexi comes into focus as someone grounded and ever-present — the friend Rue always had, but just forgot about.

We don't know a ton about Lexi, nor do we really know why her and Rue stopped talking. But in the few scenes we've seen her in, Lexi has always been thinking of Rue's well-being: she rebuked a classmate who joked that Rue "probably had brain damage," assisted Rue with passing a drug test, and even helped to protect Rue's younger sister Gia. While Lexi seems a bit jealous of the relationship between Rue and Jules, she's ultimately supportive and clearly wants the best for her. Despite them having drifted apart, she appears to always be keeping an eye on Rue, and in the end it's Lexi, not Jules, who rushes out to comfort her at Daniel's party.

After Rue perceives that Jules feels weighed down by her, she runs out to the front and confesses to Lexi that she feels like a burden. "It's embarrassing, and it's stupid, but it's true," Rue says. But Lexi isn't having it. "No, don't say that. You're not a burden," Lexi says, enveloping Rue in a hug as Rue cries. This is the fallout that Ali warned about: Rue has been hinging her sobriety on someone she just recently met, and now her old friend is picking up the pieces.

This episode made it clear that Lexi and Rue have a history that is far deeper than the whirlwind, fairytale romance that Jules and Rue have been experiencing. In the scene where Lexi and Rue work together to scare the McKay twin hitting on Gia — amusingly reciting names from HBO's The Wire — we see the friendship that Euphoria before just hinted at. Whereas Jules and Rue's costumes provided a stark contrast between the two, Lexi and Rue's outfits were pretty complementary. They have the same humor, the same taste in clothes, the same shared history, and the same sort of blunt, wise-beyond-their-years attitude toward the antics their peers get into. While Rue feels like she's dampening who Jules is, and Jules feels caged by Rue, Lexi and Rue's relationship feels like a true partnership.

It's no surprise some fans have read Lexi and Rue's relationship as romantic, and that Lexi is hiding her true feelings for Rue. Some viewers have pointed out that Lexi dressing as Ross "screams bisexual energy," as does Lexi asking Rue to help her practice french kissing. There's also the smile Lexi has when she sees Rue text her for the first time in a while, and how eagle-eyed fans noted that Lexi is often watching Rue and Jules.

It's possible, of course, that this is all just Lexi missing the close friendship she had with Rue, and she's always worried about Rue's safety. In the end, it doesn't matter much whether the relationship is platonic or romantic. Lexi has proven to be someone who has always had Rue's best interests at heart. If she's just a friend, the stability and encouragement she provides is exactly what Rue needs as she figures out how to live for herself rather than for a relationship. And if Lexi is in love with Rue and is simply waiting for the right time, then that just means her feelings for Rue are unselfish and true. "Rexi" may or may not be endgame, but it's nice to know regardless Rue has somebody in her corner.