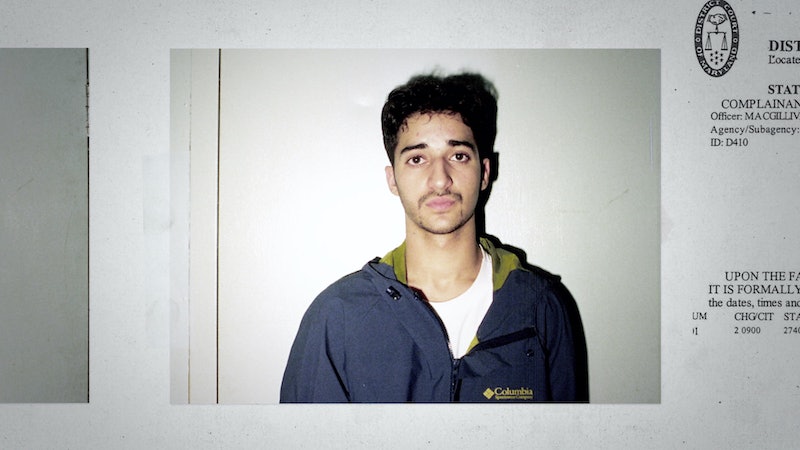 If you've listened to Sarah Koenig re-examine the 1999 murder of Hae Min Lee in Serial, you probably won't learn anything new while watching the first episode of HBO's The Case Against Adnan Syed. You'll mostly hear familiar names and voices, and sit through a rehashing of details that have already been repeated several times over. But that doesn't mean you shouldn't give the new series a chance. Serial fans will like The Case Against Adnan Syed because even though it's not telling a new story — at least at first — the new format does lend a different, more human perspective to the case.

As Serial listeners know, Lee's ex-boyfriend, Adnan Syed, was convicted for her murder in 2000, but has always maintained his innocence in connection to the crime. In The Case Against's first hour, the show retraces their relationship. We hear excerpts of Lee's diary explaining how she felt about him, the story of their first kiss at prom, and details about why they both needed to keep their romance a secret from their parents.

Some of these anecdotes are nearly word-for-word identical to what Serial presented in 2014, but there's something to be said for the visuals that accompany them. We see an animated version of Lee's diary and all the exclamation points she included when she felt particularly passionate about something. We see photos of her and her friends, and with Syed at prom. These images have a way of driving home what sometimes felt lost amid the phenomenon of Serial — that this isn't just an interesting murder case to theorize and speculate about. Lee was a person, a teenager, whose life was cut tragically short.

There's also old news footage of Lee's family reacting to her death, of her brother testifying in court, and even an interview with a family friend recalling the aftermath — none of which Serial listeners would've gotten from the podcast. They're heartbreaking moments to witness, but they serve a purpose. In all the anger and controversy surrounding Syed's conviction, it can often be forgotten that Lee's family endured an unimaginable trauma. The Case Against Adnan Syed refuses to let her memory shift out of focus.

Syed's family also comes into the spotlight more than they did in the podcast. They suffered a loss too, albeit a much different kind. Seeing them continue to grapple with what they believe is the unjust incarceration of their son and brother — actually watching them move through their lives with a sadness and emptiness in their eyes — is poignant in a way Serial never quite achieved even in its most hard-hitting moments.

And even though The Case Against doesn't initially introduce any new information that Serial didn't cover, that doesn't mean it never will. Near the end of the premiere, we learn that the filmmakers hired their own experts to conduct an independent investigation, and that could yield some interesting results. Plus, given that Syed was granted a new trial in 2016, two years after Serial aired, it could also delve into the developments that have happened in the case since, and what that means for Syed. (Though it won't include the Maryland Court of Appeal's decision on Friday to uphold Syed's conviction, as reported by CNN. This means Syed ultimately won't get a new trial, though his attorney Justin Brown vowed to keep fighting for Syed in a statement posted to his website).

Comparatively, Serial felt more like a straightforward investigation, and HBO's series feels, at least in its first episode, like a more emotional exploration of what was lost. The Case Against may not include any explosive new reveals, but you will come away with an understanding of the pain caused by Lee's murder — both for her family, and for Syed's.