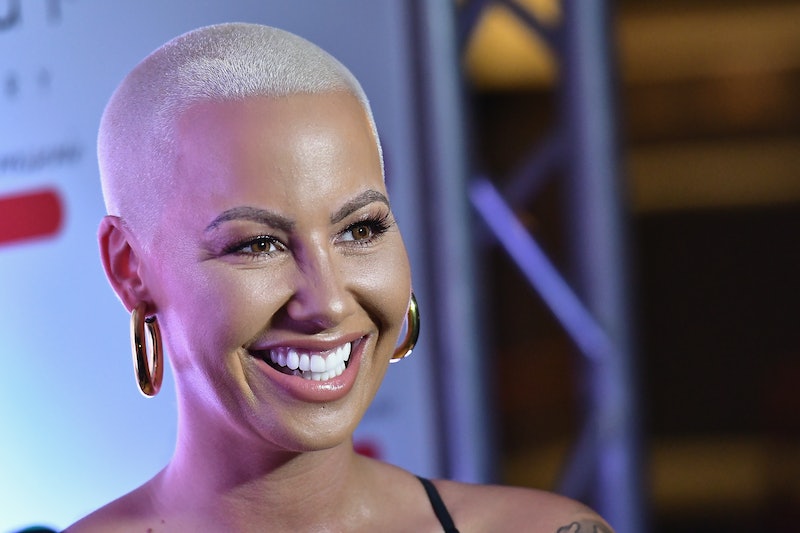 Amber Rose doesn’t suffer fools. Whether she's criticized for seeming to brag about her looks, gets trolled on social media for showing her pubic hair, stands up for women who pose nude in Playboy, or jokes about running for president, she unabashedly owns it all. I spoke with Rose on the heels of the gender equality festival known as the 2017 SlutWalk and she answered her detractors and offered her expertise on staying confident in a world of shamers and bullies.

“I’ve been through a lot in my life. I know that if I put out a picture of my pubic hair, I know I’m going to get a lot of punches,” Rose says over the phone. “But I look at the comments and laugh. I know that I’m controversial and I want to start a conversation. You get trolls, but then there’s people who’re like, ‘but wait, let’s really have a conversation about this,’” she adds.

Let’s start with the fact that it takes a confident woman to strip for a living (as Rose once did. She started stripping under the name “Paris” at 15 years old, to help out while her parents went through the divorce. Add to that, years in the spotlight and being hounded by paparazzi, all while dating Kanye West from 2008 until 2010, and then being married to Wiz Khalifa — they divorced in 2016, but he is the father of her son, Sebastian. And now, with all that experience behind her, the sex-pot activist, born and raised in South Philadelphia, takes her criticism in stride.

She's fresh off her successful 3rd annual SlutWalk in Los Angeles on Sunday October 1, which saw over 20,000 people in attendance, including her beau, 21 Savage. At the festival, Rose kicked off the walk donning a super-hero costume, as “Captain Save a Hoe" (below). This was just one of the may ways the 33-year-old author of How to be a Bad Bitch, counters a culture that seems to be plagued by bullying and judgement. In fact, according to frightening statistics from StopBullying.gov, 70.6 percent percent of young people say they have seen bullying in some capacity, while 30 percent of young people surveyed admitted that they have been the subject of bullying themselves.

“I tell girls this all the time… Until you do exactly what you want, while being a compassionate, nice person at the same time, you’re not truly living,” Rose says.

Rose brings her idealogy into every aspect of her commitment to feminism — even when mainstream conversation seems to take a different stance. For one example, take the conventional feminist understanding that Hugh Hefner’s legacy is considered by many to be an exploitive one. However, when Rose talks about Hefner’s recent death, she takes a defiant stand against that narrative. For her, criticizing the women who posed nude in Playboy (or even the man at the helm) goes against everything she stands for.

“I don’t think [Playboy] objectified women. If that’s your choice to pose nude then we are smart enough and capable enough to make our own decisions in life,” she says. “Hefner paid a lot of women a lot of money to support their families by posing nude. They made a conscious decision to do that. And they’re proud of that. I believe he absolutely adored women and he gave them a platform to feel beautiful and sexy and confident.”

But Rose says she knows what she says can be controversial. Whether it’s through her SlutWalks or the Amber Rose Foundation, an organization dedicated to driving conversation about gender inequality and issues of injustice, this push against the status quo is her mission to raise awareness of hypocrisy when it comes to how women are viewed in society.

She sites NFL coaches and owners as an example: they support players when they "take a knee" as a symbol of their protest against police brutality and racism in the U.S., but yet, they don't condemn players who accused of sexual assault or domestic violence.

“America has a horrible history of racism in this country, and also sexism. But sexism is taboo. People are uncomfortable talking about it,” she says recounting who women are taught “their place” by society, while men are taught they’re superior. “They work, and women should stay home and take care of the kids, and because a woman has a vagina, she’s going to be emotional and not be capable of being in a higher position. It’s all bullsh*t and that’s why I’m here to talk about sexism and let people know that this is also extremely important,” Rose adds.

Still, speaking her mind has also gotten Rose into hot water with some of the very same people she’s been credited to bring into the feminist movement. In June 2017, Rose did an interview on the weekly podcast, "Drink Champs,” wherein she was quoted as saying that she was "blessed with beauty" it was "difficult" and that she felt like she never "belonged" in Philadelphia because of it. "I grew up in a very poor neighborhood, and I don't know how to say this without sounding f*cked up, but, a lot of the people where I'm from aren't traditionally attractive people…” she said.

At the time, women in South Philly turned to social media to take Rose to task for the comment as a feminist — and black women felt particularly attacked. “Amber Rose’s comment is one the reasons why there’s a stigma of light skin women thinking they’re prettier than everyone,” one person tweeted.

Since then, she has defended what she’s said, and continues to stay focused on helping to right wrongs as she sees them. And despite the Philly controversy, because Rose is a woman of color, many have argued that she’s behind bringing more women of color and the LGBTQ community into the feminist movement, where once they were an afterthought. She says her goal is that all communities unite for justice.

“I went to a college to speak, and a black woman, with brown skin, asked me what I was doing specifically for black women alone,” she recalls. “Me being a multi-mixed-race person, I don’t like to segregate feminism from race. I don’t say, these are white feminists, these are lesbian feminists, these are black feminists, there are liberal or conservative feminists. I welcome everyone to my SlutWalk because the end goal is equality.”

Ultimately Rose says people will judge and criticize her no matter what she says. But she won't stop reaching for her objective for women to own their power and step up to their rightful place. In fact, she says everyone on her team says she should run for president. “I mean Trump got into office. I should run,” Rose jokes… maybe.