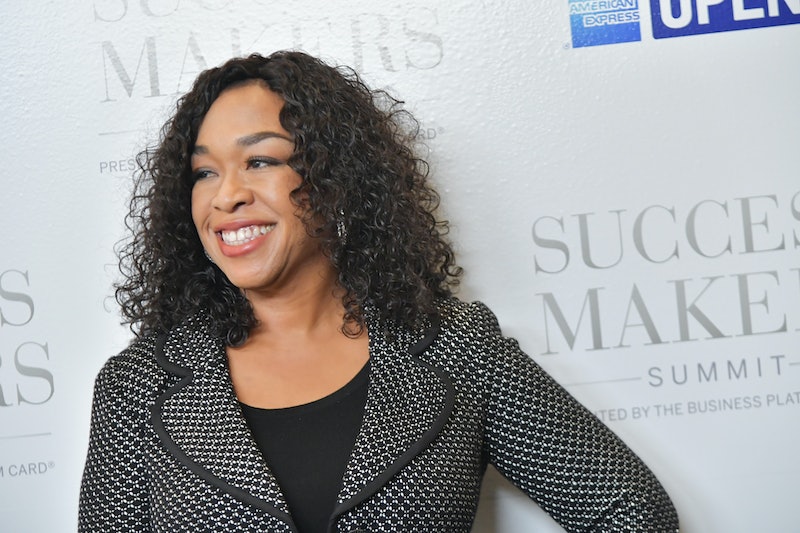 Shonda Rhimes, maker of all things TV, is currently on a mission to help women create their own definition of beauty while simultaneously expanding the meaning of what it means to be beautiful. She's doing this with the help of Dove Real Beauty Productions and an all-female film crew. (So badass, right?)

Throughout this incredible collaboration, Rhimes and Dove will work together to tell the stories of real women and how they define beauty. Because, as we all know, this definition could use a little work.

"I think, for a lot of people, there are many who are comfortable with wider definitions of beauty and who frankly already think they’re amazing and beautiful," Rhimes tells Bustle. "And there are a lot of people who have been trapped by what they see in magazines or on TV." That's why she wants women to know it's not up to anybody else. "Beauty is how you define yourself. Not how you let everybody else define you."

For the first Real Beauty Productions film, Rhimes chose to focus on a woman who is totally changing the game. Her name is Cathleen Meredith and she's the creator of Fat Girls Dance. In the exclusive YouTube video below, Meredith says she started her dance group as "a radical act of fearlessness" even though she believes it "shouldn't have to be that radical."

"Every time I ever dance anywhere everyone's always surprised not just by my ability to dance and my skill at dancing, but my energy," Meredith says in the video. "We launched [Fat Girls Dance] and it almost immediately went viral. There's plus sized women everywhere who are like 'Woah, I've never seen anything like this before and you are helping me deal with issues with my body.'"

When Rhimes first heard of Fat Girls Dance, she thought it was a bold move. She quickly realized, however, that Meredith's group isn't so much about the "radical act" of plus sized women dancing, but about something much more. "There’s something about it that I found so inspiring for myself," Rhimes tells me. "Like I closed the door to my office and I danced a little, too. I just thought [Meredith] was incredible and I thought the women that were with her were incredible."

Fat Girls Dance encourages women to do one dance every week for a year, and to watch themselves dancing on tape. It was through this process, of seeing herself dancing, that Meredith realized she was disconnected from her body. "She talks about [how] her beauty was found a little bit in this process," Rhimes tells me. "[Meredith's] always loved herself and thought she was great, but you have to tape yourself and watch yourself dancing. She fell in love with her body and she didn’t know that she hadn’t had a relationship with her body before this." In other words, it's all about connecting and falling in love with yourself.

In a one-on-one convo, Rhimes sat down with Meredith to chat about defining beauty. "In working with Dove and Real Beauty Productions, we get to talk to real women and hear their stories of real beauty and hear how they define beautiful," Rhimes says to Meredith in the video above. "The idea that you talk about it as generating self-love is a very mind-blowing concept, because I don't think a lot of us think about beauty in terms of self-love."

Meredith goes on to tell her that Fat Girls Dance does even more for women. "One of the things is it makes you stronger and it makes you limitless, and you weekly have to encounter something that you think you can't do and then you do it," she says. "And I think that builds a resilience that you didn't know was missing. Watching your body every single week has created a love affair with Cathleen that I didn't know I didn't have."

So what's Meredith's definition of real beauty? Definitely "fearlessness." She says fearlessness "always looks gorgeous." And Rhimes agrees. "Not only is [Meredith] dancing like no one’s watching, but she’s dancing like she knows she’s the most beautiful person in the room and like she’s living in it," Rhimes tells me.

Take one look at the videos of Meredith dancing and you'll see that spark, too. Her amazing personality is one reason Fat Girls Dance has become such a global movement. When Rhimes met Meredith, she told me she a) had to know her and b) had to dance, too. Through her dance and her energy and her visible love of dance, Meredith is helping women all over the world fall in love with themselves.

"We’ve come so far in how women are represented. There’s been a giant growth. But I do think there’s so much more work to be done, and so much more work that could be done that would be powerful for women," Rhimes tells me. "And ... speaking with Dove and getting to work with them and getting to meet someone like Cathleen … it’s exciting to me that there’s really big steps forward that are happening. I find it very inspirational."