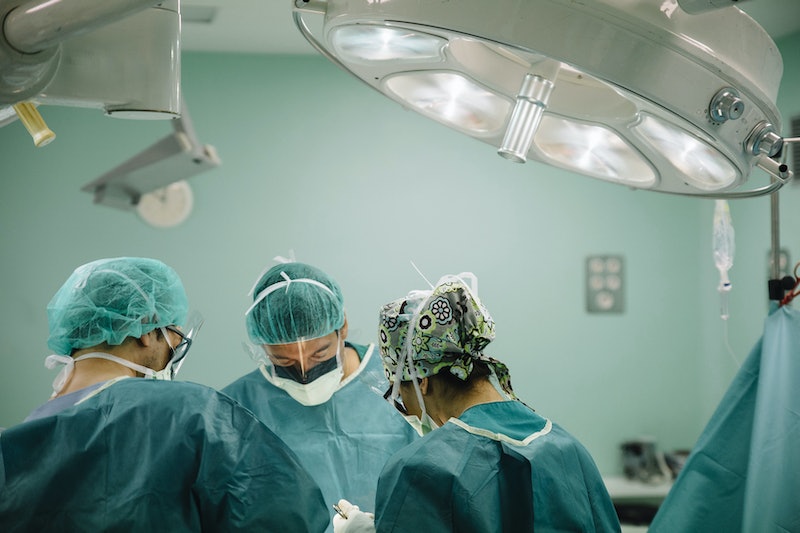 Here's a thought you may not have had recently: Would you donate an organ to a friend who needed it — or even a stranger? What about when you pass away? It might a be morbid thought, but it's a conversation worth having with your loved ones. There are many reasons to consider being an organ donor; for one, 13 people a day die while on the kidney transplant waiting list in the U.S. alone. It's also easy to join; you can sign up with the national donor registry online in about five minutes. But the way we think about organ donation is, surprisingly, tied up with gendered ideas about compassion, self-sacrifice, and the female body. Organ donation is another medical procedure that benefits from being seen through a feminist lens, and this is why.

On a very basic level, donations are essential to keeping all people alive. But research shows women are more likely to donate their organs than men, especially as living donors — and researchers worry that this has to do with gendered ideas about self-sacrifice and altruism, specifically that women are more conditioned to be sacrifice a literal part of themselves for a greater good. According to a landmark study in 2002, women are far more likely to be living donors than men, and a 2008 study from Germany noted that women are more positive about the idea in general and more opposed to the idea of monetary compensation for donation than men are. While this could just be a sign that women are awesome, there are other societal factors that make it troubling, namely the worry that sexism and societal patriarchy are proving coercive. In India, the organ donation organization More To Give found in 2016 that women have consistently made up around 75 percent of live kidney donors while men have made up an average of 80 percent of the recipients over the past five years. They also noted that women make up 60 percent of live donors in the U.S., 58 percent in Norway and 65 percent in Switzerland. As gender inequality in a society declines, so does the vast gender imbalance in donation — but there's still a gender discrepancy.

A 2016 study on this issue noted that, along with gendered expectations that women will be "self-sacrificing," there are other factors at play: Men are more likely to be unsuitable donors for certain organs because they are statistically more likely to experience hypertension & heart disease, and more likely to require transplants themselves. However, when it comes to living donors, there seems to be a continual problem with assuming that women will be the compassionate ones willing to donate.

This is particularly important because it's becoming increasingly clear that women's tissues need to go to women to have the best chance of success, after years of believing that gender didn't influence donation outcomes. Studies have shown that female-to-male transplants seem to have lower rates of success than male-to-male, and we're not entirely sure why. It could be that female donors tend to be older, but hormones could be influential, too. Additionally, according to a study conducted in 2002, some organs donated from women seem to have lower rates of success than male ones, even if they're transplanted into women. The scientists looked at 124,000 kidney transplants, 25,000 heart transplants and 16,000 liver transplants worldwide, and noted that if the organs came from women, they had higher rates of failure. The expectation that women will bear the burden of live donations doesn't just disadvantage them; it disadvantages male recipients. It shouldn't be all on women to sign up to be donors — men need to step up, too.

Another issue when it comes to donation concerns how gender intersects with race. Women of color make up a disproportionate amount of women on transplant waiting lists, and given that there is a much better chance of finding a match within your own ethnic group, increasing the diversity of the potential donor pool is a tangible way to try to address health inequality. According to the Organ Donor Registry, in 2017, African American, Hispanic & Asian people made up 56.7 percent of the total of patients on transplant waiting lists, compared to Caucasian patients, who made up 41.7 percent. African American people in particular made up 29.2 percent of the total — a disproportionate amount, compared to the fact that Black people only make up 13.3 percent of the U.S. population. That's a stark reflection of racial health inequality in the U.S.

But a potential reason why this discrepancy exists is a little bit harder to fix. According to a study from 2013, people of color are less likely to consent to donation after their own deaths. Some people point to the fact that this country has a history of medical abuse, including experiments and forced sterilization, of people of color as a possible explanation for lingering distrust of the medical establishment by people of color in the U.S. This is one of the many ways in which donations enter into discourses about sexism and histories of violence. And there's no easy answer to the problem this history presents — but meanwhile, the need for donations from diverse donors continues to be an issue.

Organ donation will always be a contentious subject for some, but for the sake of helping women's health and aiding our understanding of organs and compatibility, donation looks like a very feminist option. But science and society need to catch up in order to approach the issue from an intersectional lens, so that more people, of all genders and races, can benefit from this lifesaving procedure.

More like this
How To Fight For Reproductive Rights, Based On How Much Time You Have
By Courtney Young
Sandra Bullock, Girlboss Extraordinaire
By Matt Harkins & Viviana Olen
Yomi Adegoke On The Offline Diaries & The Power Of Representation
By Jessica Morgan
The Music Industry Continues To Fail Black Women
By Precious Adesina
Get Even More From Bustle — Sign Up For The Newsletter