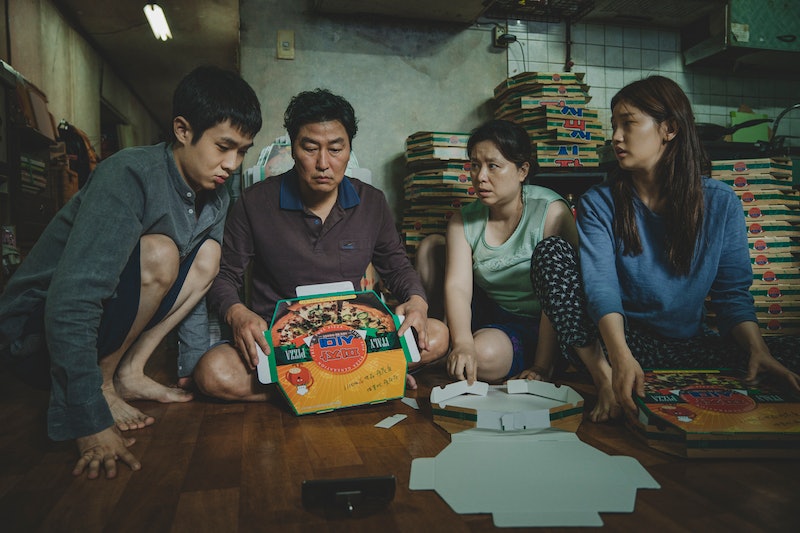 Just released in the United States this past Friday, Parasite, a movie about the economic disparity between two South Korean households, has taken the world by storm. After their whirlwind tour through Korea and Europe, where the film won the top prize at Cannes and director Bong Joon Ho received Locarno's Excellence Award for lifetime achievement, Bustle sat down with stars Song Kang-ho (who plays Kim family patriarch Ki-taek) and Park So-dam (who plays his daughter Ki-Jun) in a plush, brightly decorated midtown Manhattan suite to talk about why Director Bong's distinctly Korean film has moved international audiences so deeply.

Song isn't surprised by the film's reception. "On its surface [Parasite] might look like a socioeconomic commentary that revolves around Korean living spaces, but I think if you look at the general themes, it's really about conflict between different classes and the efforts of reconciliation," she explains. "Those themes really resonate across cultures in different countries."

Parasite follows the hard-on-their-luck family, the Kims, as they work their way into the employ of the wealthy Park family. Brother Ki-Woo (Choi Woo-sik) gets his foot in the door first, recommended as an English tutor for the Park family's teen daughter. Sister Ki-jung follows as "art therapist" for the seven-year-old son, and before long, dad Ki-taek and mom Chung-sook (Hye-jin Jang) are in as chauffeur and housekeeper, respectively. Just as the family celebrates their upswing, well... spoilers won't really ruin the film for you, but it's best to go into Parasite with no idea of what's coming.

If you're familiar with the genre-hopping work of Director Bong, including Snowpiercer, Okja, and The Host, it's no surprise that he turned a tale of two families into a gripping, frightful, and funny thriller. But what was less easy to predict is how well Parasite's been received across the globe. The film won the Palme d'Or at Cannes, sold out all available screenings its first week in NYC, and nearly sold out all of Los Angeles as well. Parasite marks the first time in a decade that Director Bong has returned to film in Korea, but speaking to The Hollywood Reporter, he insisted that it just happened to be the right time and location for the narrative. The film is not an active rejection of Hollywood scale, pointed critique of Western influence, or back-turning on international audiences.

The film doesn't over-explain cultural details, such as the preparation of ram-don (an original translation of "jjapaguri," which is a combination of two instant noodle brands), mentions of North Korean concerns, or the design of the families' very different homes. Song notes that while the semi-basement where the Kims reside "might seem a bit foreign in the United States," it would be very familiar to a Korean audience, and that he personally once lived in a similar home. "For me actually, the house of the rich family felt a little more foreign," the actor continues, "because I, myself, am not rich."

The wealthy house shocked Park when she first saw it. "First thought I had was, is this a house for one family?," she remembers thinking. Meanwhile, the Kims' home "felt so relatable, and even smelled like a semi-basement house that I had been in before." That musty smell, incidentally, becomes a tension point between the two fathers in the film, an intimate, inescapable marker of their difference.

Though the film is being lauded for its socioeconomic commentary, Director Bong avoids labeling either family as good or bad within the film, instead letting their dynamics play out. Park says that when she first read the script, she thought of the intentional mirroring of the two clans as a means of reflection, not judgment.

"The idea of having two — the Park family and Kim family, in their core form of parents and two kids, son and daughter... I read it as illustrating how the life we live looks like and less about the discrepancy of social and economic differences," the actor explains.

Song adds that, when he was filming, "I wasn’t consciously thinking about this dichotomy between a parasitic versus a coexisting kind of family." He continues, "I felt I was slowly being absorbed into the story that eventually played out."

Some of that absorption was encouraged by the film's working environment. "One of the most distinctive differences for how actors are treated on Korean film sets is we don’t have an individual trailer for us to go back to; we actually share one green room for the majority of the cast to be in," Park explains. "So naturally, during the filming period, we had to spend time together, and because of that we naturally became closer every day."

The set of the Kims' house started to feel almost too much like home. "I wasn’t even sure if it was OK for me to be wearing my pajamas and being very comfortable in it!" Park adds. "But it didn’t feel like I was at work, that was how much we melted into the role."

Song says that the experience and working relationship among the cast also helped. "Since everyone on the film were expert actors, there wasn’t this sort of artificial, 'Let’s do this, let’s try this to make it look more like a family' [attitude]," he explains. "I felt like there was always this relationship of mutual trust, and because we really believed in each other and had trust in each other’s acting, [the family relationships] sort of came naturally."

Song is one of South Korea's biggest film stars, described in a THR article by no less than Tilda Swinton as "one of the protean greats of world cinema." He's also worked with Director Bong a number of times. For an up-and-coming actor like Park, that could have been intimidating, but ultimately, was an incentive.

"When I was first approached about Parasite" she says, "the only thing I heard from Director Bong was that the only person confirmed to be in the cast is Song, and that I would most likely be a daughter of his in the role... but that itself was enough!" Park explains that the opportunity to learn from Song kept her excited and motivated throughout the shoot, adding with a laugh that she felt "hashtag blessed" to be working directly with one of her acting heroes.

That relationship also bleeds into the palpable joy the Kims take in each other's company, which anchors the film through its twists.

"A family like the Kim family was full of love and human connection," Park says. She points out that the numerous scenes where the foursome make time to eat together in the evening speak to the family's genuine affection, considering how busy many Korean families are. They also make Parasite's conclusion all the more heartrending.

Mild spoilers ahead. "Especially for this family, it was really the biggest pain to be separated from each other," Song says. And therein lies the real key to the film's universal popularity. "This pain of separation isn’t something that's unique in Korea," he continues. "It’s obviously something for families around the world. That’s the biggest pain people can relate to."

More like this
What’s New On Netflix: 'Never Have I Ever' & 'Indian Matchmaking' Return
By Arya Roshanian
Jamie Foxx Revealed The Question That Got Cameron Diaz To “Un-Retire”
By Grace Wehniainen
At 14, Rachel Sennott Had A Sexual Awakening While Reading 'Twilight'
By Samantha Leach
How To Stream 'Bodies Bodies Bodies'
By Morgan Leigh Davies
Get Even More From Bustle — Sign Up For The Newsletter