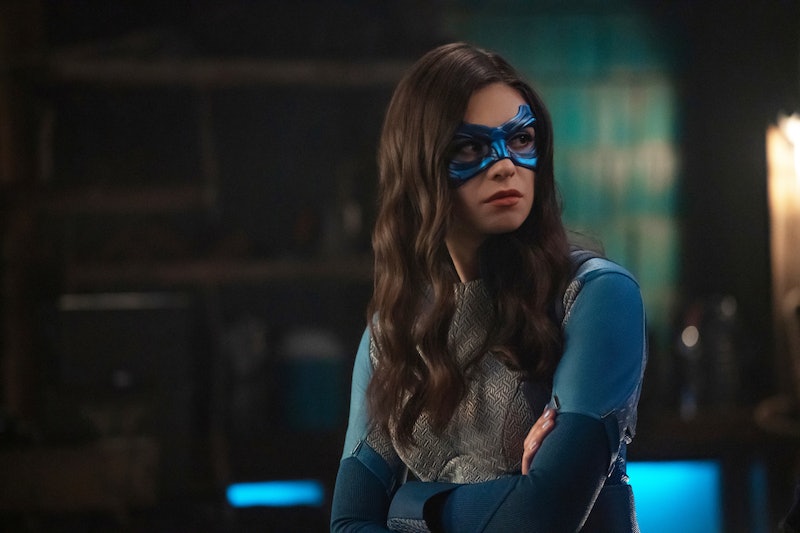 Nicole Maines was a hero long before she started playing one on TV. The 22-year-old actress became the first transgender superhero when she joined the CW’s Supergirl as Dreamer, but she was already a bold-face name within the transgender community. She and her family sued her Maine school district after she was barred from using the girls' bathroom in elementary school and the fight became the subject of a New York Times bestseller called Becoming Nicole. Maines merged the activism that's defined most of her life with her acting career on Sunday night's episode, as Dreamer faced down a transphobic villain.

“I'm really happy with the way that Nia's trans-ness is dealt with and the way that Dreamer's trans-ness is dealt with,” Maines tells me. (Nia is Dreamer’s alter ego.) “Because it's always there and it's talked about and it's a part of her character, but it's not the only thing she has going on in her life.” On the most recent episode, "Reality Bytes," though, that changes for the worse. Nia’s roommate Yvette, also a trans woman, is attacked, and her assailant slips her a message intended for Dreamer:

“The world doesn't want a trans superhero so crawl back under the rock you came from or I'll keep attacking people like you.” Instead of going to the police, she strikes out to get justice.

For a show set in a parallel Arrowverse, this week’s episode feels conspicuously Earth-bound. The characters discuss cultural erasure, the dangers of social media (Yvette is lured by her attacker via the dating app UpSwipz), and even ripped-from-the-American-headlines statistics, like the 24 trans people murdered last year. For the first time since joining the cast last season, Maines was involved in the writing process. “We wanted to really highlight the increased risk that trans women of color face in our society, and how much more likely they are to be the victims of hate-related violence,” she says. “So when we were cutting things they're like, ‘OK, what points can we drop?’ I was like, Absolutely not this one."

Maines talked about what it would have been like to grow up with more examples like Dreamer on TV. “I think it would have, from the jump, meant there would have been less bullying and there would have been less pushback,” says Maines, who remembers that the trans people on television when she was young were much more likely to be on The Jerry Springer Show than primetime. Even when trans characters did enter narrative television, they were unspecific.“They were more afterschool special-type characters that just existed to teach the characters of the show and the audience some lesson.” On Supergirl, Dreamer’s trans-ness is relevant for how it connects her to a larger trans community, not simply how it locates her as a foil to the show’s cisgender characters.

Rather than feel overwhelmed by the burden of representing the trans community, Maines welcomes it. “No matter what role I'm playing, as a trans woman on television, that is activism.” When fans reach out to her on social media or cry when they meet her, she sees the tremendous effect that she’s having. “I'm very happy to keep providing this representation for the community, but I'm also looking forward to playing characters who are cisgender and really hammering in that trans women are women and we're able to play women as well.”

More like this
Ozzie’s Coming Out Scene With Kitty On 'That ’90s Show' Has Twitter Sobbing
By Brad Witter
'That '90s Show' Is Officially Coming Back For Season 2
By Gretchen Smail and Grace Wehniainen
The Plane Crash In 'Dear Edward' Is Based On A 2010 Tragedy
By Grace Wehniainen
A 'Terminal List' Sequel & Spinoff Are Reportedly In The Works
By Kadin Burnett and Grace Wehniainen
Get Even More From Bustle — Sign Up For The Newsletter
From hair trends to relationship advice, our daily newsletter has everything you need to sound like a person who’s on TikTok, even if you aren’t.