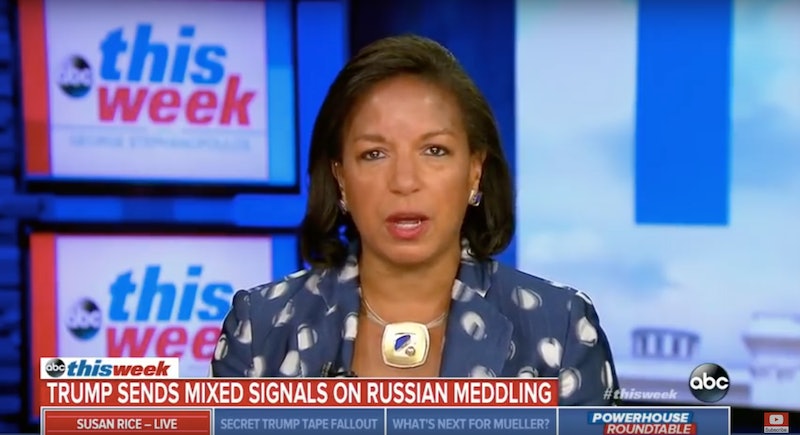 Former presidential advisers are still weighing in on the current global direction of the White House, and the analysis is heavy with disapproval. In an ABC interview on Sunday, President Barack Obama's former national security adviser, Susan Rice, said Trump's meeting with Russia's Vladimir Putin would have been a "historic mistake" for any American president for one reason in particular.

"We need to know everything, and the president's national security team needs to know everything," said Rice, who also served as the United Nations ambassador during Obama's first term, on This Week to George Stephanopoulos "It was a historic mistake to allow the president of the United States, not just Donald Trump, but any president, frankly, to sit for two hours without any note takers, without any aides present with one of the most adversarial leaders of the world relative to the United States." According to Rice, Trump's national security team should know every detail about the one-on-one meeting between the two world leaders.

This past Monday, Trump and Putin met in Helsinki, Finland for a controversial summit that led to widespread denunciation in the days after. Critics especially rebuked the private, two-hour meeting between the two presidents. Rice has called the summit a "tragic display of sycophancy."

"Very predictably," Rice said to Stephanopoulos, "the Russians are feeding their line of what happened. We are hearing no rebuttal or comment from the United States. Russia is dictating the public perception, the global public perception of what transpired in that meeting, and we have no basis for countering it. It's a very, very uncomfortable and, indeed, dangerous situation for the United States to be in."

Even the president's director of national intelligence, Dan Coats, said he didn't "know what happened in that meeting."

"I think as time goes by — and the President has already mentioned some things that happened in that meeting — I think we will learn more," Coats said during the Aspen Security Forum on Thursday, according to ABC News. "If he had asked me how that ought to be conducted, I would have suggested a different way. But that's not my role. That's not my job."

Coats' remarks come after he gave a self-described "awkward response" to the president's undercutting of U.S. intelligence agencies' conclusions on Russia's election meddling. Coats later said he did not mean to be "disrespectful or criticize the actions of the president,” according to The Independent.

Even before the summit took place, Rice already had her reservations about the two leaders coming together, given Trump's established pattern of unorthodox behavior. In an op-ed, she had expressed skepticism of the summit, saying the "risks are many and the benefits, if any, are difficult to discern."

Rice believes that the issue of whether President Trump is "compromised by Russia" is one that is legitimate, given that she does not "know what his motivations are."

"It has been reinforced ... sadly, this week, by that tragic display by sycophancy in Helsinki where the president called into question yet again, standing next to Vladimir Putin, a dictator, the integrity of our intelligence community," Rice said.

The issue, per Rice, was not that the two met at all; Rice said she was "not opposed to the notion of engaging the Russians" but that a second meeting between the two leaders doesn't "make sense."

"There are things to discuss with the Russians, but we should have come into that meeting very well prepared, pressing our grave concern about Russian interference in our elections," Rice said during the interview. "There's no inherent problem with two leaders, even from hostile countries, engaging in dialogue. I support that. But you must come prepared. You must come to advance the United States' agenda, not to lie prostrate for the Russian agenda."

"Any American president should stand up for the United States of America," Rice said to Stephanopoulos, "in the present, and historically, when meeting with Vladimir Putin."