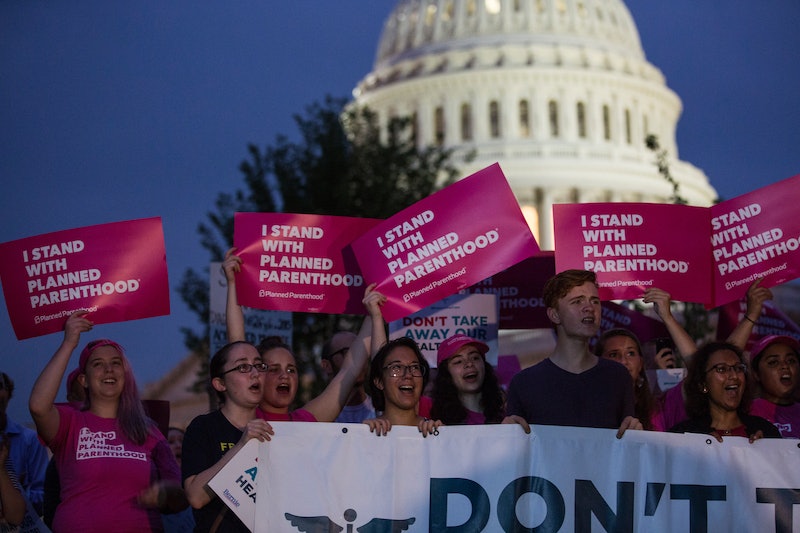 Eight months into Donald Trump's tenure as president, political absurdity and social unrest are par for the course. Fed up AF? There is a good reason why the August 2017 partial lunar eclipse is a good time to protest. Astrologists have noted that because Trump was born during a lunar eclipse — and because lunar eclipses are usually catalysts for necessary change and rebirth — it potentially makes him more susceptible to the celestial power of eclipses, which you can use to your advantage.

Astrologist Marjorie Orr explained on her website that "Donald Trump was born three hours 15 minutes after a lunar eclipse, with an almost exact full moon in place. His moon is conjunct the south node in the fourth, which will anchor him in the past, to his father, his childhood and the attitudes he grew up with, especially where women are concerned."

She also noted several previous Trump troubles that have occurred during lunar eclipses, including "when he was the butt of jokes by then President Obama and comedian Seth Meyers at the 2011 White House Correspondents’ Association dinner after his birther campaign." This was reportedly his impetus to run for president in the first place.

If you want to shake Trump's glass house, this might be an ideal time to renew protesting the Trump administration's human right's violations with renewed zest.

It's An Ideal For Gaining Momentum

On Astrology Zone, Astrologist Susan Miller called eclipses wild cards, and referred to them as the "most dramatic tools that the universe uses to get us to pay attention to areas in our life that need to change. They uproot us, surprise us, and get us moving. They shake us out of our feelings of compliancy so that we can move from one level of maturity to another, to a higher plane, and they work very rapidly."

She also explained the lunar eclipses generally signify that something is coming to an end, and that only eclipses that line up with your birth chart will affect you. Additionally, Astrology King noted that this particular lunar eclipse is a time to purge negative energy and emotions from the past six months. This makes it an ideal time to re-group, unite, and organize with renewed strength.

What's more is that the Aug. 7 lunar eclipse phase marks the end of an eclipse phase that began in February. The beginning of this phase, which started with the Feb. 10 lunar eclipse, marked a particularly rocky period for the Trump administration, and forthcoming partial lunar eclipse basically completes that cycle.

"The key issues clearly associated with this two week period surrounding the full moon and eclipse commenced with the judicial rejection of Trump’s anti-Muslim travel ban, Ivanka Trump’s commercial problems, the resignation of Michael Flynn, the radical change in commitment to the two-state Israel-Palestine solution, and finally the press conference, which according to some detractors, was the press conference to end all press conferences (where Trump began his anti-press stance)," Astrologer Terry MacKinnell noted.

This Eclipse Can Influence Human Affairs

The Aug. 7 partial lunar eclipse is in the sign of Aquarius, and in the constellation of Capricornus, which is also known as the Sea Goat, Astrology Kind noted. "The Sea Goat has a great influence over human affairs and brings major changes in such areas as climate and political customs."

Additionally, the presence of Jupiter square Pluto, a planetary phenomenon that began in in Nov. 2016 and will be active through August, compels people to succeed and reach their goals, which makes this partial lunar eclipse an idea time to organize and protest. However, Astrology King cautioned that how you reach your goals is important.

"Success, power and influence are all possible, but without some care, there will be a price to pay. Ruthless determination, greed, and corruption may get you there quicker and make you more money, but at what cost? Your personal life is the most likely area to suffer, especially your closest relationships. Remember a lunar eclipse highlights your emotions, home life, and partners."

Think of it like this. You already know that Trump is unlikely to heed the warnings about the pitfalls of ruthless determination, but you my friendlies are more self aware than that. This is why the partial lunar eclipse is the perfect time to lend your voice to one of the upcoming protests.

Can Astrologists Really Predict The Future?

I tend to think of astrology the same way I do a weather forecast. I check it out to see if I need to bring an umbrella, but I don't take it as gospel, and I don't let it rule my life. If you're not sure whether or not you believe in the ancient wisdom of astrology, it's OK to believe halfway because, after all, humans still have free will so it's unlikely that astrologists can predict everything.

Astrologers interviewed by John Keilman for the Chicago Tribune predicted Trump's revolving door cabinet problems, and the exposure of the depth of his alleged ties with Russia back in January. But, let's face it — almost anyone could have predicted this.

Additionally, in a story for the South China Morning Post, Julia Hollingsworth reported that Priscilla Lam, the Hong Kong feng shui master who predicted Trump's triumph over Clinton, also predicts that Trump's house of cards will begin to crumble in September. However, she also predicts that Trump will remain president for all four years of his term, but will not be re-elected.

There are scores of other predictions, but since most of us don't have a crystal ball, organizing and protesting is vital to surviving the next four years. The time to hesitate is through — onward.