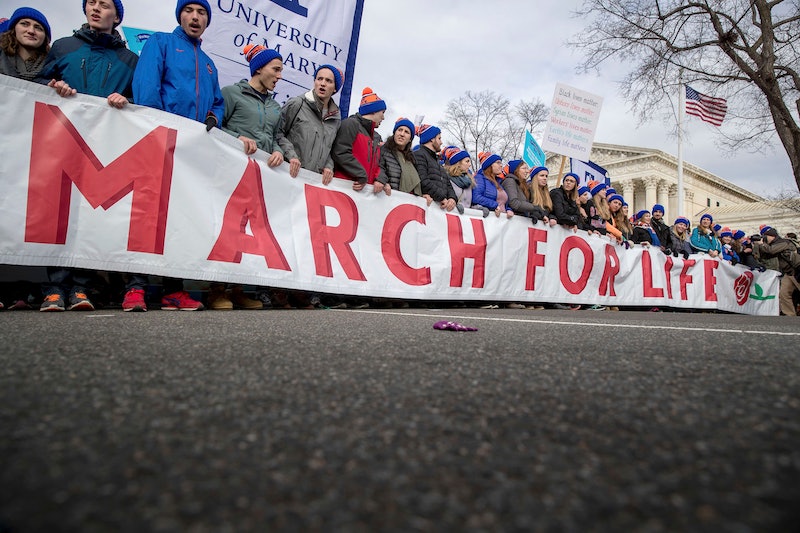 In this op-ed, Shaina Goodman, the director of policy for reproductive health and rights at the National Partnership for Women & Families, and Gretchen Goldman, the research director for the Center for Science and Democracy at the Union of Concerned Scientists, explain what they think about how the Trump administration and anti-abortion movement claim science supports their position.

Trump administration officials are supposed to be using science and evidence-based information to protect public health — but they’re actually doing the opposite. Nowhere is this more apparent than in these officials’ anti-abortion actions and their connections to anti-abortion organizations like the ones supporting the March for Life, which is holding its annual event this month using a theme that claims “science is on [their] side.”

This claim is part of a continued campaign to block our access to evidence-based care. It is a smokescreen designed to hide the fact that the anti-abortion movement has a long history of mischaracterizing and ignoring science to suit its ideological agenda. In fact, many members of the current administration disregard and distort science, instead pushing radical ideologies that undermine established facts to advance an agenda that is harmful to women’s reproductive health.

Take Scott Lloyd, who until November headed the Office of Refugee Resettlement at the Department of Health and Human Services and made headlines for his role in the Trump administration’s family separation policy. He is specifically known for denying young women in ORR’s custody access to abortion care, but according to Vice, Lloyd also admitted in a lawsuit deposition that he considered having an immigrant woman undergo an abortion “reversal.” This medication abortion “reversal” procedure is based in false and biased information that medical experts have deemed to be unsubstantiated, inappropriate, and non-scientific.

Diane Foley, a former president and CEO of anti-abortion group Life Network — and now deputy assistant secretary for Population Affairs at HHS — has perpetuated the myth of so-called “post-abortion syndrome” to falsely claim links between abortion and mental health problems. There is no scientific evidence for this claim, and in fact, in a years-long study published in PLoS ONE, people were more than 99 percent likely to say that their decision to have an abortion was the right choice for them. Foley also helped run fake women’s health centers, which use false and medically inaccurate information to discourage people from seeking abortion care and to shame women. Her predecessor at Population Affairs, Teresa Manning, publicly stated that “contraception doesn’t work,” despite significant scientific evidence to the contrary.

And Charmaine Yoest, who headed anti-abortion group Americans United for Life and currently serves in the administration’s Office of National Drug Control Policy, has falsely claimed that abortion increases the risk of breast cancer.

This month marks the 46th anniversary of Roe v. Wade, and women still can’t trust public officials to use science appropriately and in service of our access to reproductive health care. Abortion opponents continue to lie about the safety of abortion — ignoring the evidence that proves abortion is among the safest medical procedures. They perpetuate falsehoods about the physical and mental health impacts of abortion. And they help enact laws that force abortion providers to provide scientifically inaccurate information and medically unnecessary procedures to women seeking care, along with hundreds of other anti-abortion laws across the country.

This disregard for science, coupled with hostility toward women’s dignity and self-determination, is a hallmark of the anti-abortion movement’s rhetoric and tactics. March for Life leaders and Trump administration officials may try to claim the mantle of science to support their cause, but the anti-choice movement is fundamentally anti-science. They cannot hide from their longstanding — and ongoing — manipulation and disregard for evidence and basic facts.

The truth is that the evidence is on the side of increased access to reproductive health care, including abortion and contraception, and that reproductive health, rights, and justice advocates are the ones working to ensure that government officials and their decisions are grounded in the facts. Every day, we’ll keep fighting for scientific integrity in our public health policy — and for women’s dignity and equality.