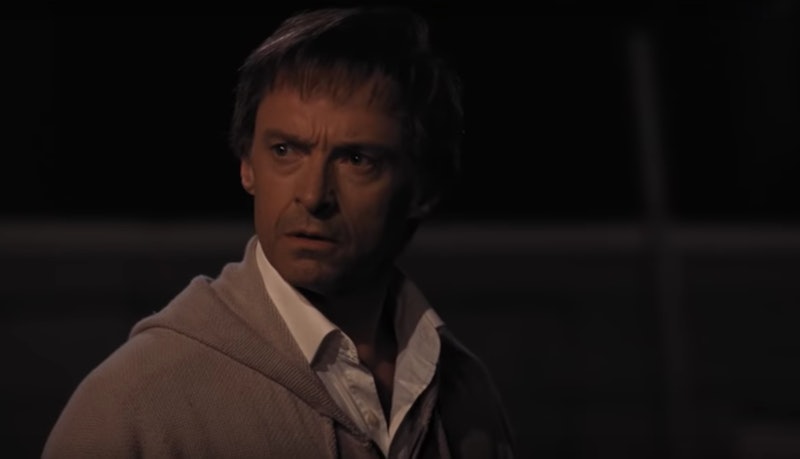 Most millennial moviegoers either don't remember or weren't alive for the scandal that brought down the presidential campaign of Senator Gary Hart, who sought the 1988 Democratic nomination. But your parents likely do, because it was huge news and, as filmmaker Jason Reitman's The Front Runner suggests, possibly changed politics forever, sending the public's obsession with celebrity snowballing into our current situation. Hugh Jackman plays well against type as Hart, who continues to be known for his stoicism and for valuing his privacy. The actor tells me when we sit down at the Crosby Street Hotel in New York City that he doesn't believe that a candidate with Hart's personality could ever come close to winning the presidency again.

"He genuinely did believe that if he started to open [his personal life] up, it breaks the link between [him and ] the voters, which is, 'What am I gonna do for you and this country, and what do you think about that?' rather than, 'Do I wear boxers or briefs, and what kind of food do I like, or what’s my dog’s name?'" Jackman says.

Per The Washington Post, journalists from The Miami Herald watched Hart's D.C. townhouse after receiving a tip about a possible affair. They saw him and a pharmaceutical rep named Donna Rice enter, and then leave again in the morning. Though both Hart and Rice deny that their relationship was ever sexual, the damage was done.

Or was it? One of the questions raised by The Front Runner is whether or not Hart could have bounced back if he had been willing to play ball and answer personal questions about Rice in particular and adultery in general. There are moments in the film where reporters interviewing him seem to be silently begging Hart to just give them something, as if they know he could rebuild trust just by satiating their readers' curiosity. In Jackman's mind, that was never even a possibility for the senator.

"I don’t think his nature was open like that," he says. "I don’t think his generation [is] as well. I know this from my father who is the same age. There’s just certain things you didn’t ask, and he was not comfortable talking about it."

Jackman says that the role was a tough one for him, seeing as he had to understand and then portray a person who played it notoriously close to the vest. "The film is never necessarily trying to make it easy for you to understand this enigmatic character," he says. "The one word, most common word people would use to describe him was 'elusive.'" In addition to the logistical issues of finding a way into that kind of person, the actor was challenged to understand why Hart was as difficult to get to know as he was. "I’m a very open person, I’ll answer your questions most of the time probably more than you want to hear," he says with a laugh. "Most characters I play have their hearts beating out of their chests, I suppose."

It helped that Jackman became friendly with the former senator throughout the process. His opinion of the completed film was important to the actor, and he recalls getting a brief e-mail from Hart after his screening, saying basically that he wanted to talk to Jackman about it, but needed "a few days to let it digest." The star says that Hart was ultimately "very complimentary" of the film, Jackman himself, and Vera Farmiga, who plays Hart's wife Lee, but that his response was "complex" too. "It’s a very difficult, painful time in his life that’s being brought back up again," he adds.

There are no heroes in The Front Runner, though Rice and Lee Hart come closest, caught in the storm as they are. But that's very much the point of the film, though it'll be interesting to see how its portrayal of the press will go down in the "Fake News era." The actor points out that Watergate, which had happened 15 years previous, was a situation in which "the press pried and pried and did things that they weren’t supposed to do and told us things that were really important to know." But were the details of Hart's allegedly dirty laundry as important to the fate of the country?

"I think that Jason is desperately trying not to make a statement about all these things," Jackman says. "He’s trying to present the chaos, the mistakes, the humanity, all of what an election campaign is, from all different sides. So you as the viewer get to make your choice. I think ultimately the movie’s trying to get us to ask ourselves the question, 'What is the most important thing?'"

Jackman has received some heat for remaining friends with Jared Kushner and Ivanka Trump, telling Variety of their attendance at his recent 50th celebration, "We don’t talk politics at birthday parties." But in discussing the implosion of Gary Hart, he's critical of the current state of affairs in the political sphere. "It feels like all bets are off right now, all principles out the window," he says. "And it’s survival of the fittest." We should demand the best of our leaders, he adds, "but we as human beings should know that no one lives up to that all the time."

Whether Hart's campaign truly was the turning point that marked the beginning of our demand for intimate, personal details of politicians' lives, it's certainly an interesting case to look back on. And in any case, Jackman clearly admires the former candidate's resolve.

"I do believe he could see that there would have been a way to save himself and his candidacy, but he’s a very principled man and, as [you see] in that scene with J.K. [Simmons, who plays campaign manager Bill Dixon], he believed, 'If I do this, nothing will be the same with any candidate,'" Jackman says. "And he didn’t want to be the one to be responsible for the sullying of the process. He believed in the sanctity of the process."

More like this
Lauren Lyle Is Keeping The Contents Of Karen Pirie’s Bum Bag A Mystery
By El Hunt
On 'The Handmaid’s Tale,' Christine Ko Fights Back
By Gretchen Smail
Lin-Manuel Miranda & Tituss Burgess React To 'Little Mermaid' Casting Backlash
By Radhika Menon
An Extremely Messy Ranking Of What Actually Happens In 'Don't Worry Darling'
By Chloe Foussianes
Get Even More From Bustle — Sign Up For The Newsletter