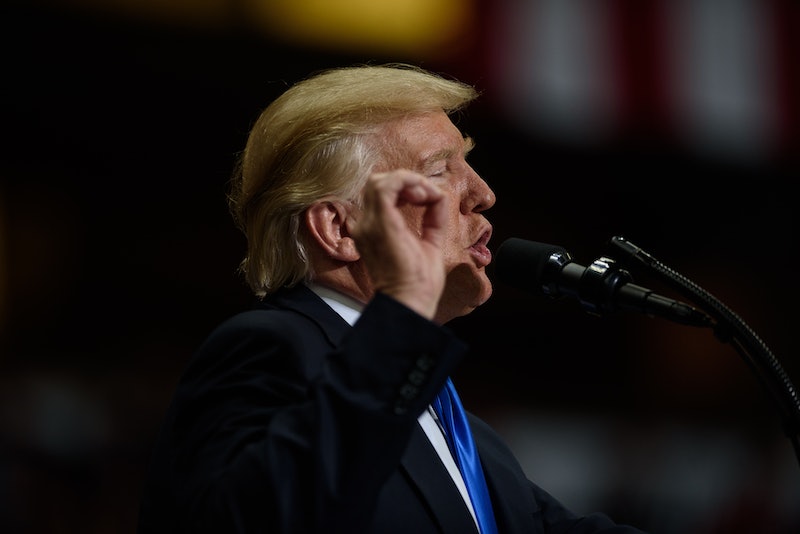 Recently, a great deal of confusion resulted from conflicting reports that the American Psychoanalytic Association (APsaA) had seemingly overturned the Goldwater Rule, which states that mental health professionals cannot offer commentary on the mental health of public officials if they have not examined them. As it turns out, the Association did not overturn the rule, though a massive misunderstanding resulted in significant online discussion about whether or not the rule is still appropriate in the "Trumpian" era.

Discussion around the issue began after a health website known as Stat News posted an article on Tuesday that said that the American Psychoanalytic Association (not the be confused with the much larger American Psychiatric Association, or APA) had told its members via email that they should "not feel bound" by the Goldwater Rule. The rule stems from an issue in 1964 in which a magazine published an article entitled "1,189 Psychiatrists say Goldwater is Psychologically Unfit to be President!" Barry Goldwater, a presidential candidate at the time, sued the magazine for libel and, in 1974, the APA put the so-called "Goldwater Rule" in place to avoid similar issues in the future.

When Stat News published the article announcing that the APsaA had supposedly repealed the rule, both critical and praiseworthy internet commentary abounded. Some people supported a repeal of the rule, saying that it was time for mental health professionals to apply their knowledge to public discourse, particularly in unprecedented political times under Trump. However, others were critical of the supposed repeal decision, supporting the long-held notion that it is inappropriate to comment on someone's mental health without having treated them, public figure or not.

As the internet reacted strongly to this news, though, it emerged that the Stat News story was not fully representative of the APsaA's guidelines. As the APsaA indicated on its Twitter page and via a statement, the article was "misleading" and "did not encourage its members to defy the Goldwater Rule." It also added that the email the association sent to its members merely " ... articulated a distinct ethics position that represents the viewpoint of psychoanalysts ... [which are] applicable and valuable to understanding a wide range of human behaviors and cultural phenomenon."

Furthermore, Wylie Tene, the organization's director of public affairs, told NPR that APsaA members "have always been free to comment on public figures, but have been cautioned against diagnosing," and that there has been no change to the organization's policy. Additionally, the organization pointed out that the Goldwater Rule is a part of the ethics code of the APA, not the APsaA and thus the latter is not bound by that rule.

For its part, the APA also released a statement on Twitter just to mitigate any possible confusion, saying "For the record, the @APAPsychiatric stands by the Goldwater Rule. Nothing has changed." Indeed, according to NPR, the organization's 37,000 members still remain very much bound by the rule.

The discussion around the controversy resulted in some very interesting discussion on the issue of the Goldwater Rule and the appropriateness of commenting on the mental health of public figures, particularly as it relates to stigmatization. Some people, including Time's Jeffrey Kluger, noted that keeping the Goldwater Rule in place seems to further the divide between physical and mental health if professionals are allowed to comment on the former but not the latter, entrenching the prioritization of physical health over mental health. Moreover, as the article put it, if the mental health of a president can profoundly impact millions of lives, it is irresponsible to not at least have a conversation about it, particularly with a president who seems to perpetually break norms of acceptable behavior.

However, others believe that eliminating the Goldwater Rule (something which has evidently not occurred) not only could result in inaccurate characterizations of public figures, but could also serve to further stigmatize mental health. Eliminating the rule, for instance, could allow political opponents to "weaponize" someone's alleged mental health status and use it against them.

As noted above, the American Psychiatric Association has no plans of repealing the Goldwater Rule anytime soon — and the professional body seems to strongly feel that doing so would be harmful (though not all of its members agree). The confusion over the Stat News story has certainly provided a great deal of insight into how and why professionals must tread very carefully when assessing anyone's mental health, including Trump's and other public figures, in order to ensure that they are not further perpetuating any type of stigmatization.