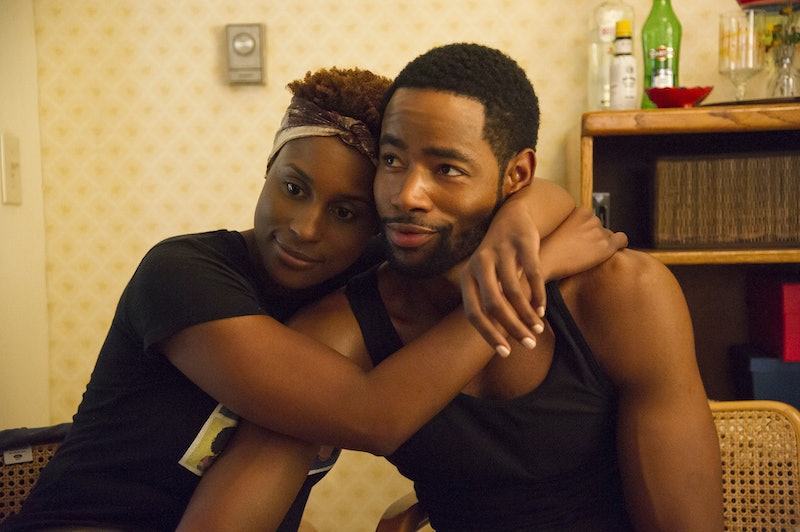 During a pivotal scene in last week’s Insecure episode, Molly forces her BFF Issa to face her baggage. While helping Issa unpack in her new apartment, the ambitious lawyer insists that they establish a “trash” box, a receptacle for purging all the old ish that no longer has a place in Issa’s brand-new life. Issa only mildly objects to junking faded birthday cards and dog-eared Zane novels, but she outright balks at the notion of tossing out a collection of old mix CDs curated by her ex, Lawrence. Molly sighs hard in response to this stubbornness and dangles the cracked-looking jewel cases over the void before teasing: “If you want a fresh start…”

Visibly sad, Issa finally agrees to scrap what may have been the last memento of her time with the homebody-turned-tech professional. But why can’t Insecure's self-appointed #LawrenceHive do the same?

Not a single episode of this season, including the most recent, “Fresh-Like”, has aired without the online objections of the Lawrence Hive, a mostly male contingent of the HBO show’s fan base that somehow fashioned a national hero out of a negligent and, at least initially, unmotivated boyfriend that Issa cheated on in a moment of frailty.

Lawrence, who wasn’t working for a good chunk of time during he and Issa's relationship and even spaced on Issa’s birthday plans, became the poster boy for “nice guys,” the increasingly self-indulgent brand of man who thinks that because he’s not cheating (or beating) on a woman, womankind owes him the utmost patience and is obliged to shore up his fragile ego even at the expense of their own happiness.

Regardless of the fact that Lawrence was far from a model man, he inspired an entire online following. The sole Best Buy shirt he left hanging in the closet when he abruptly moved out on Issa was treated with the reverence typically lavished upon a Michael Jordan jersey — it even got its own parody Twitter account.

If you doubt the continued ferocity of the Lawrence Hive, consider these tweets, including one from radio personality Charlamagne Tha God, who opined the following about Issa’s cute day date with Nathan, a Lyft customer-turned-new love interest:

Hopefully, the actor portraying Nathan isn’t too dismayed by the #LawrenceHive hate, because the same slander followed Daniel’s every move.

In an Insecure group I belong to, Season 3 episodes have frequently been bookended with postings of unbridled disgust that Issa ended up couch-surfing at the home of the dude she cheated on Lawrence with. One would think Daniel’s seeming send-off at the close of “Fresh-like” would end that ire. Yet, in the hours after Issa embarked upon possible new love, the Lawrence Hive was still hanging tough. This unflinching level of obsession underscores the real problem with this fandom.

It suggests that a show created by a brilliant Black woman, starring other Black women, and mostly focused on their friendships and professional foibles should somehow be centered on a man. Though Jay Ellis is a talented actor, he was part of an ensemble and, early in the show’s history, actually existed more on the periphery of Issa’s life as she tried to figure out a way to get out of a comfort zone that included him and her problematic job at We Got Y’all.

If Lawrence can move on, why can’t these men who have been hypnotized by the rhetoric of “ride-or-die” women and “good guys deserving the girl” get over it, too?

Rather than a permanent part of the show’s fabric, Lawrence served as a cautionary tale of what happens if you are not honest about the state of your relationship. For the receipt-seekers, rewind back to Season 1, Episode 1, when Issa wanted to break up with him. “Seriously, I’m starting to resent him,” Issa confided in Molly before returning home to find Lawrence lounging on the couch, having forgotten their plans to celebrate her birthday. “I spent my entire twenties with a man I’m not even going to end up with.”

Admittedly, rather make a clean break with him, Issa let things fester until the relationship was beyond repair. Then, when Lawrence finally rallied, it was too little too late. Even Lawrence, in his cream cable-knit sweater glory, acknowledged as much during the couple’s bittersweet closure conversation at the end of Season 2.

If Lawrence can move onward and upward, why can’t these men who have been hypnotized by the rhetoric of “ride-or-die” women and “good guys deserving the girl” get over it as well? The latter is a narrative well-worn into the grooves of pop culture, from John Cusack’s character holding up the boombox in Say Anything to a pre-McDreamy Patrick Dempsey riding off into the sunset with the popular girl at the end of Can’t Buy Me Love.

But that is not reality, nor is it realistic.

There is a word for what Issa is experiencing this season, a term articulated by her friend Kelli and immortalized in this gif:

Growth. It means that people you love at one point in life might not be your forever love. It means that you can make mistakes and still be worthy of another chance with another person. It means that a woman should certainly have a lot more going on for herself than being someone’s girlfriend. It also means that Issa and her ilk should be empowered to explore possibilities, not just in their careers, but with the Daniels and, yes, even the Nathans of this world.

The Lawrence Hive can certainly keep hashtagging hate every week. True, their loyalty and meme-making were mildly funny at first. But as time progresses with no seeming end to their outcry, this chatter is increasingly disrespectful to the real Issa Rae, the show’s heart, soul, and creator. It’s not easy to forge a new path, and the show’s storytellers subliminally agree.

At the very end of “Fresh-like,” Issa (who, by the way, also quit We Got Y’all in the same episode) waffles for a moment over her decision to place Lawrence’s Adele-addled mix CDs outside for trash pickup. Wisely, she overcomes that hesitation and drops them into a bin. Hopefully, the Lawrence Hive will glean the message in that gesture and move on, too.