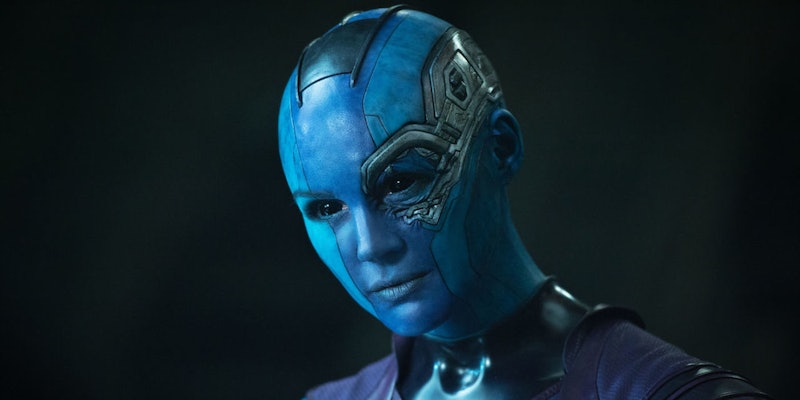 Unless you were re-upping on your chips and dip at the time, chances are you saw the Guardians Of The Galaxy: Vol. 2 Super Bowl spot air during the Big Game this past Sunday. And if you did, you may have noticed certain things like a strange gold woman, how adorable Baby Groot is… and the conspicuous absence of a certain purple-skinned villain. Thanks to an interview with director James Gunn on CinemaBlend, fans now know why the Marvel Cinematic Universe's big bad will be absent from the sequel: because Guardians Of The Galaxy 2 will focus on Gamora and Nebula instead.

Fans have known for over a year that Thanos won't be in the Guardians Of The Galaxy sequel, despite the fact that the extraterrestrial antagonist lurked around the fringes of the first entry in the space opera franchise, and that the MCU has been building up to his climactic clash with the Avengers in next year's Avengers: Infinity War — in which Thanos will be "the main character," as Marvel Studios president Kevin Feige recently told Collider. So it was a bit surprising to learn that he wouldn't be making a return appearance to scuffle with the Guardians… but now his absence makes sense, as Gunn has revealed that Thanos is being temporarily pushed aside to make more room for his two daughters and their sibling rivalry.

"It's about two sisters," the director told CinemaBlend about his upcoming sequel. "It's not about the sisters and their father. It's about two sisters, and what were the sisters' problems with each other. ... It really isn't about Thanos." Gunn actually seemed a little relieved that he wasn't required to shoehorn in Thanos for cross-promotional franchise purposes this time around: "It wasn't the most fun part of the movie last time for me, and I just didn't want to do it this time," he said. "The relationship with Thanos has nothing to do with it. It's about [Gamora and Nebula's] relationship to each other, and what is that. That was interesting to me, and I thought it was important to our story, and important to our characters."

Knowing that a Marvel movie is finally putting a relationship between two women front and center will likely come as something of a relief to fans who are tired of seeing the franchise's few female characters relate only to men (Pepper Potts and Tony Stark, Natasha Romanoff and Steve Rogers, Hope van Dyne and Scott Lang, etc.) It will also come as a relief to those who noticed the alarming trend that Gamora doesn't speak in any of the Guardians trailers. So far, three teasers have been released for the upcoming sequel, and the character played by Zoe Saldana is the only member of the titular team who hasn't had a single line in any of them. Not one.

In fact, Gamora didn't speak in either of the full-length trailers for the original Guardians film, either. While someone might point out that most of Gamora's dialogue tends to come in the form of no-nonsense monologues — which admittedly don't always make for the most punchy, trailer-friendly one-liners — excluding the group's sole female character from every single trailer is not a coincidence or an oversight… it's a pattern. (The same kind of pattern in which the sole female character of The Avengers is also the only character to not receive an action figure.)

With the news that GOTG2 will forefront the relationship between Gamora and Nebula (and also introduce a new female Guardian named Mantis), the sequel may actually become one of the only MCU films that pass the Bechdel Test — assuming, of course, that not every single one of the sisters' conversations is about their surrogate father Thanos. That fact, combined with the proliferation of women of color as love interests (Spider-Man: Homecoming's Zendaya, Thor: Ragnarok's Tessa Thompson, Black Panther's Lupita Nyong'o), and the upcoming release of such female-centric films as Ant-Man And The Wasp and Captain Marvel, it appears that Marvel Studios is actively taking strides to improve the gender dynamics of its blockbuster franchise.

The change may be overdue, but it is welcome. The shift will begin when Guardians Of The Galaxy: Vol. 2 continues Phase 3 of the MCU on May 5.