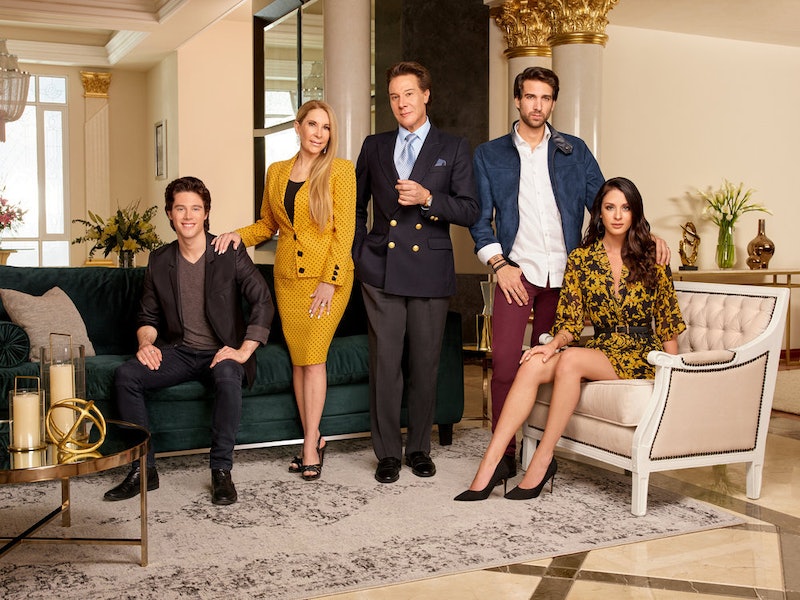 If Bravo has perfected a craft, it's serving up addictive drama. But there's a new reality series in town, and it just might spice things up on the network. Bravo's Mexican Dynasties, premiering Feb. 26, is centered around three wealthy, powerful families in Mexico City, and it's promising to deliver a kind of drama and culture fans have yet to see on mainstream TV.

But according to the Mexican Dynasties cast, their show is quite different than the Real Housewives franchise, a network staple. Perhaps the biggest difference is that Mexican Dynasties focuses on family and spotlights the dynamics between multiple generations. One cast member, Doris Bessudo, who is actually cousins with RHOBH star Kyle Richards' husband Mauricio Umansky, tells Bustle the series is "100 percent family friendly and multigenerational." Unlike the rest of the cast (because Bravo isn't available in Mexico), Bessudo is super familiar with the Real Housewives franchise. "It's totally different from Housewives," she tells Bustle at the show's LA premiere. "Ours is like a dramedy. The families [have known] each other for decades, it's like we fight and then we make up seconds later."

Adan Allende, a swoon-worthy, up-and-coming singer (and son of Fernando and Mari, both on the show), explains its relatability. "You have grandmas, grandchildren, mothers, daughters, boyfriends, true love, first love," he says. "Blood, family sticks together forever," his mother Mari adds.

Perhaps the show will even give viewers a new perspective on how drama can be handled. As the cast puts it, they don't hold grudges. "We've heard that there's a lot of drama [on Housewives]," says Paulina Madrazo, who's standing beside her brother Oscar. "And pulling of hairs between women, spilling drinks on top of each other. Mexicans are also very passionate. I think those are things we would do, but in different ways," she adds.

"In Mexico, we have a lot of respect for families and everything. We don't get into those kinds of fights. There's other drama going on in our lives," Paulina continues. "Mexicans, we're just always looking for fun and excitement." Oscar chimes in, "We don't like fighting. If we have to fight for some reason, we finish it up with a tequila and that's it. You could break the bottle on his head, but you finish it up."

The cast is also excited to bring Mexican culture to American television. "We're showing a side of Mexico that's never been shown in the media before," says Adan. "The art, the cuisine, the museums, the culture. We're really challenging stereotypes here."

And they really went into the experience with a clean slate to bring something new to the reality TV landscape. "They told us: do not watch any reality shows," says Mari. "Do not be prepared for anything, do not be influenced by any other reality shows... This is it. What you see is what you get. It's us." Although her cousin-in-law Kyle is a Housewives OG, Doris says she got minimal advice from her. "Kyle just said, 'I don't want to cloud your judgement, I want you to be fresh. Enjoy the crazy ride.'"

The biggest similarities between the franchises? "The fashion, the glamour, the over-the-top," says Doris. While Mexican Dynasties will provide drama and lavish lifestyles, it'll pull at heartstrings, not hair. "We spoke about things we're sure will get into peoples' hearts," says Paulina. "It's not possible not to."