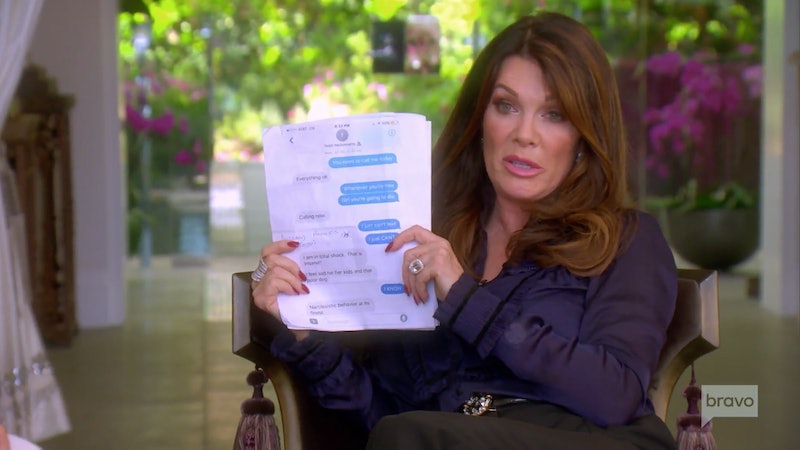 The promotions leading up to Real Housewives of Beverly Hills Season 9 have promised drama that is "crazy, epic, unbelievable, and shocking." After sitting down with the cast at the L.A. premiere on Tuesday night, it's clear they believe this season lives up to the hype. But while many viewers may think they know the whole story of the explosive divide between Lisa Vanderpump and the Beverly Hills Housewives, it seems they only know a fraction of what's about to unfold on screen. Because the drama really *is* that wild, the cast members offered Bustle some advice for fans navigating it all.

In the first episode, fans already got a glimpse of the drama surrounding Lisa V., Dorit, and the rescue dog, which was in the press last September. In short: Dorit rescued the dog Lucy from Lisa's Vanderpump Dogs and Lisa later found out Lucy was in a shelter. (In the episode, Dorit explains she thought Lucy was going to a nice home after she'd bit Dorit's kids and husband.) According to the cast, this is only the tip of the iceberg when it comes to the falling out with Lisa.

"I think there's so many layers to the story. Pay attention from the very beginning," Teddi advises. "[Watch] every little thing that happens in regards to this story because it's going to take a while to get through all the muck to fully understand. Pay attention to the details, because it all comes around."

Because each of the women have taken issue with Lisa V., there's much more to look out for than the Lucy situation to understand why. Erika says, "Watch and wait. And watch the unfolding. Be very aware." To her, the drama, while complicated, will not disappoint. "If the viewer sits back and looks at it with an objective eye, they have a real show on their hands." Kyle, who's been friends with Lisa since Season 1, says what happens is far from what fans might expect. "It usually takes a few episodes for things to unravel, this was like, Episode 1, bam," Kyle says. "Nobody expected that."

However, viewers watching the first episode may sympathize with Lisa, whose brother had recently died by suicide. Is it fair to be arguing with her when she was grieving? According to the cast, the timeline isn't exactly what it seems. The women confirm that Lisa had already shot Vanderpump Rules and had worked on her restaurants before returning to the show, so as Kyle puts it, it "wasn't her first time working" after her brother's death. "We all had tremendous compassion for what Lisa went through... There was never intention to have an argument, but I have to be honest. Sometimes being honest gets you in trouble."

Teddi shares her input on the timing of Lisa's brother's death, saying, "I think that's hard. We're all caring, loving people... Not saying there is a certain amount of time that someone should be grieving, but she knowingly came into this group again." She adds, "I have a lot of empathy for what she was going through but I also know it was a choice." Erika says that if viewers assume the cast is ganging up on Lisa, they're mistaken. "I think that's the easy way out... instead of really looking at the behavior," she says. "People often times disappoint you. And that's what this is."

Lisa acknowledged how tough this season has been for her. "It was very difficult for me emotionally, it was very challenging," she tells Bustle. "I just wasn't in a good space. That's what reality is, what's going on in your life." The entrepreneur even revealed she wished she'd taken the season off. "I said it was probably best... but Bravo thought they wanted me, we talked about that. In hindsight I shouldn't have done it." With that said, however, being the focus of drama is nothing new to her. "There is [a divide] very much so. Season 2, Season 4, Season 6, I was the recipient or main person into trouble," Lisa says. "So it's not the first time. It's the fourth time. I'm OK with that."

While she says "never say never" to reconciling with the group, the other women, who claim to each have their own personal problems with her, give their input as well. "I'm not worried about getting Lisa back in my good graces. It's not about that," says Kyle. "It'd be about two friends coming together and talking. Which I would like to be able to do, but she doesn't ever show up... she always disappears." Kyle admits she does miss being pals with Lisa in some ways. "We had fun, we'd laugh, there's a camaraderie of going back as far as we have. We enjoy each other's company," she says.

Teddi explains the Lisa drama was never a "team mentality" and, like Kyle, would be open to a one-on-one discussion. "I'm an adult, I'm open to having a conversation," Teddi says. "For me, I just really can't live with injustice and things not being the truth so that's really where I am." Erika shares a similar sentiment. "She knows my number. I am the person that has the least beef with her," the singer says. "There's a lot of other women in the group that have a lot more at stake than I do."

Has the drama been so bad that Lisa wouldn't return next season? "Oh, I don't know," Lisa says, with clearly much to consider. Until then, viewers should get ready for some seriously interesting television.