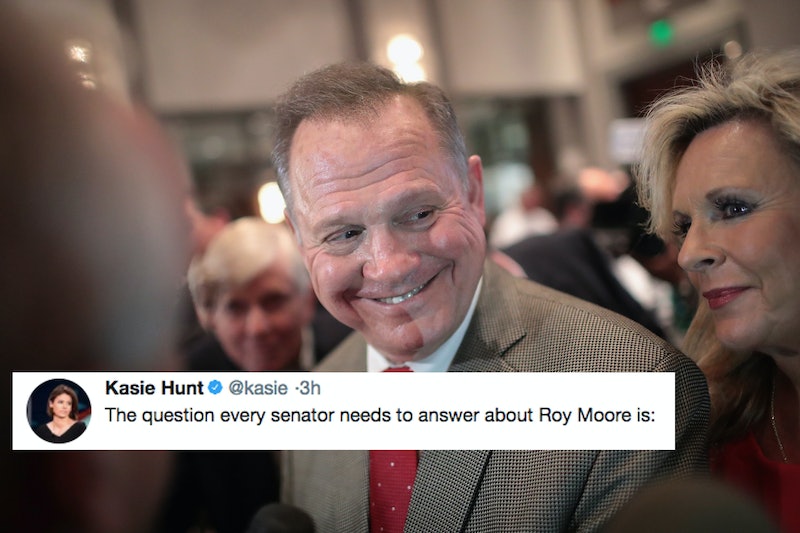 In a bombshell Washington Post article published Thursday, a woman has accused Republican Senate candidate Roy Moore of sexually assaulting her when she was 14 years old. But while the article is well-sourced and credible, few elected Republican senators have called on Moore to immediately withdraw from the race. Many have instead suggested that perhaps, if the allegations are true, Moore should withdraw, but as a tweet from NBC News' Kasie Hunt explains, there shouldn't be any "if" about it.

When confronted about the allegations, Sen. John McCain was unequivocal: He said that the allegations were "deeply disturbing and disqualifying," and that Moore "should immediately step aside." But McCain was the only Republican Senator to call for Moore's unconditional withdrawal. Others, such as Majority Leader Mitch McConnell, added a crucial qualifier: Moore should withdraw, but only "if the allegations are true." Those are McConnell's words, but other Republican Senators used similar conditionals  — "if this is true," or "if true," etc.

This, of course, leaves the door open to the possibility that maybe, the allegations aren't true. In other words, a disturbing chunk of the GOP Senate does not, as a matter of practice, believe the women who are accusing Moore of touching them when they were teenagers.

That said, it's important to keep some perspective. The mere fact that a woman can publicly accuse a prominent politician of sexual assault and receive even a moderately sympathetic audience is a relatively recent development in American history. As Hunt points out, it took a near avalanche of high-profile sexual misconduct accusations against prominent public figures — Harvey Weinstein, Kevin Spacey, Anthony Weiner, Donald Trump, Ben Affleck, Danny Masterson, and Bill Cosby, to name but a few — to get us to this point.

Those accusations were hard for a lot of people to accept, in large part because many of the figures in question were widely beloved in their respective industries for decades prior to being accused of sexual misconduct. And to be sure, there are still people who don't believe allegations like this. But in so many cases, the evidence gradually stacked up, and ultimately made it impossible to deny whatever type of sexual impropriety was being alleged. As a result, it's slowly becoming clear to wide swaths of society that sexual harassment and assault are simply far more common than they might have once believed.

Nevertheless, the country still isn't anywhere close to perfect in this regard. The fact of the matter is that the majority of Senate Republicans who've commented on the allegations against Moore have indicated that they do not, on the face of it, believe Moore's accusers. Lisa Murkowski said Moore should withdraw "if this is true." Rob Portman of Ohio said the Alabama Senate candidate should step aside "if what we read is true," while Susan Collins said that she'd call for Moore to pull out of the race "if there is any truth at all" to the allegations.

And then there was Texas Sen. John Cornyn, who gave perhaps the most revealing indication of where he stands on whether or not those who allege sexual assault should, by default, be believed.

"If it is true, I don't think [Moore's] candidacy is sustainable," Cornyn said, according to Politico. "But we believe in a presumption of innocence until proven guilty. And so I think it's important for the facts to come out."

When pressed further on whether he believes Moore's accusers, Cornyn said that he's "interested in seeing what substantiation there is for the story."

But all of Moore's alleged actions are said to have taken place decades ago, and most if not all would be just about impossible to prove beyond the shadow of a doubt required by law. What it comes down to, as Hunt says, is a simple question: Do you believe her?

For Cornyn, the answer appears to be no. But for a growing number of Americans, the default answer to this question — which is central to how we discuss and perceive sexual assault — is, "Yes, I believe them."