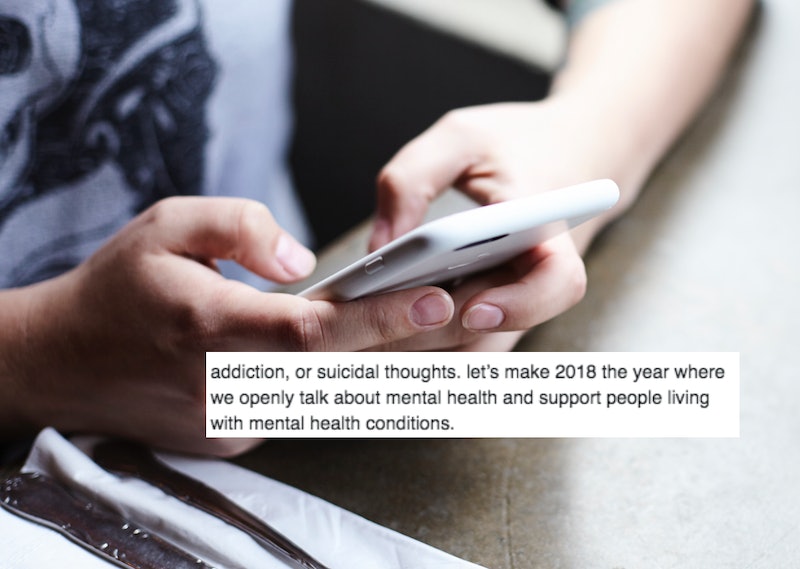 After I struggled to find proper help during a major depressive episode four years ago, I realized just how hard it is to talk about mental illness. I began to speak out in the only way that made sense for me — I wrote Facebook statuses about my experience with major depressive disorder and general anxiety disorder. Though I didn't have a major audience, dozens of people reached out saying they could relate — and I realized how much my words could impact others. When Logan Paul, the YouTube star who uploaded a video earlier this week that appeared to show a dead body, apologized by saying he wanted to "raise awareness for suicide and suicide prevention," it struck many people as dangerously tone deaf, given the context of his video. Though his video and apology were so widely criticized because of how he approached such a sensitive topic, for many it was a reminder that talking about mental health online isn't always intuitive. However, it is something that people are capable of doing in a responsible way — as long as they are willing to listen, to learn, and to treat the subject with the gravity it deserves.

"When addressing suicide and highlighting it as the serious topic that it is, any comments or actions that make light of the conversation may be doing the more harm than good," Paul Lavella, Jr. MA, LPC, LCADC, ACS, director of alumni services at Summit Behavioral Health, tells Bustle. "If you're uncomfortable talking about it, acknowledge that and try to look at why. Sensitivity is key when discussing an emotional topic as minimizing the severity may actually encourage or provoke suicidal gestures from those who are struggling."

Elyse Fox, who founded the online organization Sad Girls Club, a safe space for women of color to discuss mental health, tells Bustle that she had to learn how to have non-triggering conversations about mental health within her community. "If we’re going to talk about a topic or give an opinion, we should be well-versed in what the triggers are," she says. "I absolutely had to learn for myself as well."

She gives as an example an occasion where Sad Girls Club shared an infographic about suicide that contained a potentially triggering image, she says. People reached out to let her know they found it upsetting, so Sad Girls Club removed the post. Another mistake that's easy to make, according to Fox: Speaking out when you aren't knowledgeable about the complexity of mental illness. "Instead of giving an opinion, ask a question," she says.

Jamie Tworkowski, founder and creative director of To Write Love On Her Arms, a non-profit movement to assist people struggling with depression and suicidal ideation, tells Bustle, "We always think about what could be triggering for people who struggle with the issues we address. Words matter. Design and video content matters. For example, we avoid anything that could resemble blood, and we avoid sharp objects, because these are things that can be triggering for people who struggle with self-injury." He continues, "It’s not as simple as 'raising awareness.'"

Gabby Frost, the founder of Buddy Project, a non-profit mental health organization that matches people with friends based on their interest, says that it's important to have safe spaces online to "give people with mental illness a place where they can feel safe, loved, supported, and accepted." She says, "We believe everyone deserves to have a supportive friend in their life and want to help people make strong connections with others."

"Even though it may be difficult to have these conversations, these conversations are important," says Lavella. "Sometimes these conversations are avoided because of our own discomfort, and even though we may think our positive wishes go without saying, it's best to not assume. When talking to friends or family members with concerns about suicide and other mental health topics, let them know you care and are there for them. Even if they don't open up immediately, they will at least know that they have someone."

Frost says that being mindful of how our words could hurt other people is a way to improve our discourse.

"A lot of people say 'committed suicide,' which can be harmful towards survivors of suicide loss, survivors of suicide attempts, and people with suicidal thoughts. It’s better to say 'died by suicide,' as it doesn’t make suicide seem like it’s a crime one 'commits," she says. (The American Foundation For Suicide Prevention makes a helpful guide for framing discussions about suicide, in the media as well as in your everyday conversations, that also recommends this as a guideline.)

"Another important thing to do while having these conversations is to be patient and understanding of those with a mental health condition." Frost says. "Hear people out for how they feel, don’t just automatically invalidate their feelings and experiences. If you show you want to support people who are upset by this situation, it can help decrease the stigma surrounding mental health."

Tworkowski also adds that it's important to offer solutions as a means of support. "People should do their best to learn from experts, and to serve as a bridge to professional help. In everything we do, no matter how heavy or sad the situation or the story, we want to point to hope and help."

For Fox, remembering that she has a large audience helps her remain careful when she's posting about a sensitive topic. "We are role models to the people who are watching us," she says. "Text is best" if you're not sure whether your post is potentially triggering because a caption is easier to ignore than a photo or video, Fox says.

Just like anything else, speaking out about mental health online is a process with a learning curve, but it is so important to do that learning — because the consequences have the potential to be damaging. It may not seem like much to share an Instagram post or YouTube video, but if you're willing to treat people with mental illnesses with dignity and listen to their concerns, you'll be able to start conversations that could help erase mental illness stigma both online and in real life.

More like this
6 Abortion Advocates To Follow On TikTok
By Sara Youngblood Gregory
TikTok's Model Walk Challenge Turns The Treadmill Into Your Runway
By Carolyn Steber
I'm Going Off My Bipolar Meds to Try to Get Pregnant
By Anonymous, as told to Anna Goldfarb
TikTok’s “Miley Stewart Summer” Trend Will Make You So Nostalgic
By Courtney Young
Get Even More From Bustle — Sign Up For The Newsletter