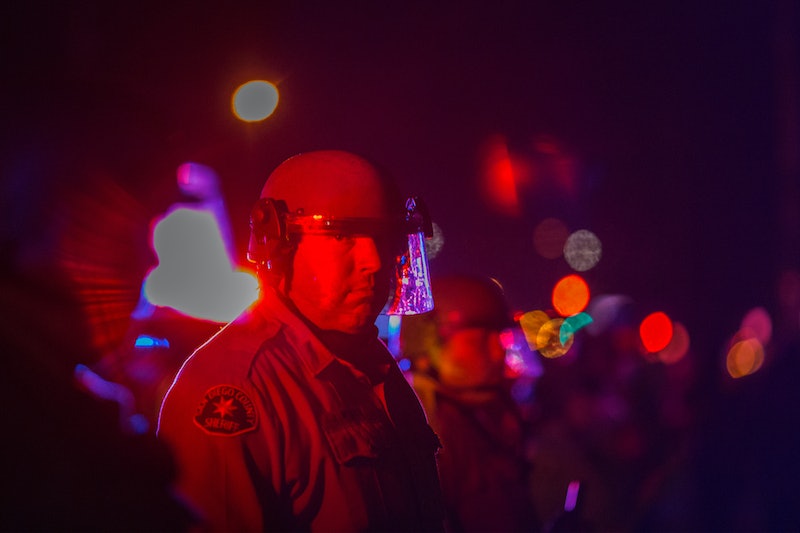 Justine Damond was white and Mohamed Noor, the officer who allegedly shot her, is black. That’s the shortest distance between two distant worlds in the U.S., and it’s a deep crevice that people like Damond and Noor disappear into because they don’t fit the conventional narratives about police violence.

She’s not a black victim whose life was cut short by a trigger-happy white cop. He’s not a white officer claiming he feared for his life in the face of a dangerous black aggressor. (But there is a disputed report of an ambush.) Neither side—those in the movement for black lives nor those who champion blue lives—rushed to proclaim victimhood or innocence because neither person fits the script.

Though her neighbors held a vigil for Damond, it paled in comparison to the social media and activist outcry that has become rote whenever a black person is killed by police. Often labelled executions, the deaths are memorialized with hashtags bearing the names of victims, crowdfunding accounts are setup to support families, talking heads bombard the airwaves, and police groups and supporters issue rushed statements standing by their men.

So what does the silence that followed this incident mean?

Nationally, the mostly white police ranks (and their vociferous civilian supporters) routinely look the other way when it comes to police misconduct and criminality. When they decry a “war on cops,” they rarely summon the same support for black officers accused in the line of duty. Some people say it’s racial. I tend to agree.

Black men, no matter what they accomplish, no matter how morally they live, must always be cast as the aggressor.

Black officers often complain about unequal treatment and sometimes outright abuse by fellow officers. So there seems to be a racial divide that likely influences how black officers are regarded, treated, and protected by blue culture.

In the case of officer Noor, it’s more complicated because he is a proud Muslim Somali-American who broke through racial, ethnic and class barriers to become a policeman. In the era of Trump, Muslim bans, ICE raids, and increasing deportations, it’s probably difficult for even the most ardent blue-lives matter advocates—who largely skew white and conservative—to speak up for a brother.

Doing so would humanize the “other.” Black men, no matter what they accomplish, no matter how morally they live, must always be cast as the aggressor. Painting them in any other light would complicate the narrative pushed forward from the presidency itself, and make it harder to rile the ignorant and fearful masses. Noor has to be another black aggressor for the blue-lives matter narrative to work.

Non-black victims like Damond seem to be less valuable to zealot police-reform advocates eager to provoke opponents with the poisoned tip of a racial spear.

If blind defenders of police looked beyond the skin color, they would probably see an officer who made a mistake, failed to follow procedure, missed a step in training or any other failing that could and should be identified and remedied. But that would require taking responsibility for how police act instead of blaming their victims for causing their own deaths.

Non-black victims like Damond seem to be less valuable to zealot police-reform advocates eager to provoke opponents with the poisoned tip of a racial spear. To an observer, it may look like declaring that “all lives matter” in this instance would dilute the message that “black lives matter,” which may be the reason for the most visible police-reform advocacy to have stayed mum this time. I don’t blame them given the ruthlessness and impunity with which so many black boys, girls, women, and men have been snuffed. But it seems self-defeating not to embrace all victims in the push for significant change.

If every police victim was mourned equally, perhaps real reform would follow, allowing opposing groups to bridge the chasm that separates them. When police reform is only a black and white matter, people like officer Noor and Damond disappear in the gray.