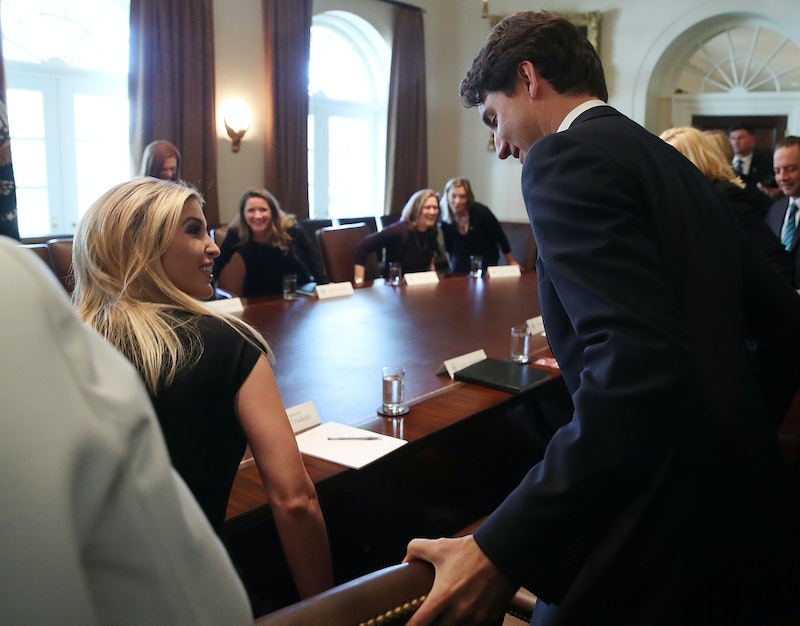 A love story in memes blossomed Tuesday when the Internet decided to ship Ivanka Trump and Canadian prime minister Justin Trudeau. The two came together at the White House for a meeting on women in the workforce — but, ironically, online commentators decided to focus on the perceived budding romance between Trudeau and Trump instead. Which brings me to: Guys, that Ivanka "swooning" over Trudeau meme is actually pretty sexist.

It's fun to spin a narrative about Ivanka meeting a male feminist and falling deeply in love, especially considering Trudeau's own public persona of being an almost legendary gentleman. Regardless, it's inappropriate to ship Ivanka and Trudeau that way; it implies that Ivanka is incapable of being in a business meeting with an attractive guy without Ivanka's romantic feelings getting involved. Ivanka has been a corporate executive since she was barely out of college, and doesn't seem to have been hopelessly distracted by men all that time.

Suggesting that Ivanka couldn't get through a single meeting with Trudeau without falling for him undercuts her intelligence and work ethic, and that's not fair, even if you take issue with her.

Additionally, both Trump and Trudeau are happily married IRL. Perpetuating the idea that either would fantasize about betraying their spouses on a whim is just unnecessary — assuming that they don't have non-traditional relationship agreements that allow them to see other people, which would be an entirely different situation. (Side note: It kind of ruins the whole "Trudeau's this amazing, feminist man" thing.)

The perceived swooning makes for a fun story, but it's ultimately a distraction from the more important things that happened in the meeting. Ivanka and Trudeau are both high-powered government leaders (or whatever Ivanka's position is exactly — no one's really sure), and focusing on some made-up love story that reduces both of them to romantic stereotypes isn't helpful to anyone.

For Ivanka, as a woman, the consequences of social legends like this can be dire. Once people stop taking a woman seriously, it's extremely difficult for her to regain that level of respect. Most people have given up hope that Trump is going to be the real feminist champion of her father's administration, but she still needs to retain the deference she would need to have any chance of pushing his political agenda in a more progressive direction.

Inventing this romance undermines Ivanka in an unnecessary and subtly gendered way, and getting distracted by stuff like this can be harmful. Never forget: There are real peoples' real lives to worry about as a result of this administration.