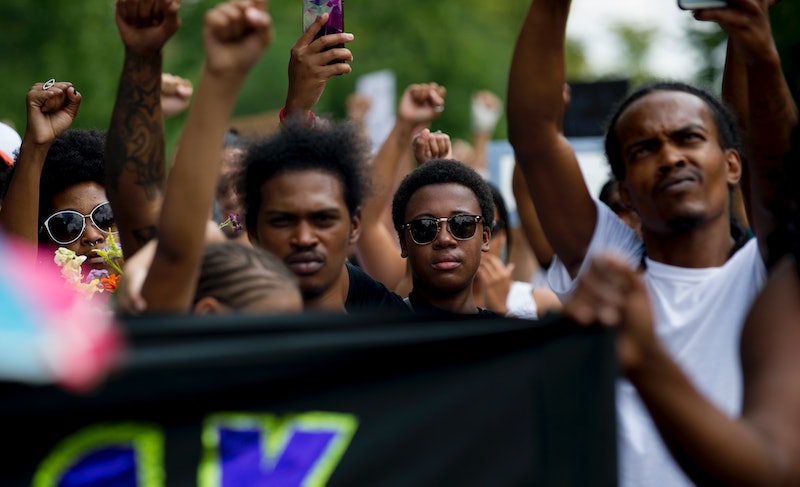 In the racially charged atmosphere that currently permeates the United States, a case in which a policeman sued the Black Lives Matter movement might have turned into a focal point of social unrest. This time, however, it fortunately wasn't to be — and when you hear why this Black Lives Matter court case was dismissed by a judge, it makes so much sense. When an anonymous Baton Rouge police officer sued Black Lives Matter after sustaining injuries while working at a protest, the judge dismissed the case, stating that Black Lives Matter was a movement, not a concrete entity, and therefore could not be sued.

“Although many entities have utilized the phrase ‘black lives matter’ in their titles or business designations, Black Lives Matter itself is not an entity of any sort,” wrote U.S. District Judge Brian Jackson in his ruling on the subject. Black Lives Matter simply isn't capable of being sued, the judge decided, and therefore the prosecution's case did not carry water.

The judge did say that a concrete person or entity connected to Black Lives Matter could be sued, but that the officer had not made a good enough case against any single individual involved. He stated that the officer's description of the incident conclusively showed that the protest's leader had not incited violence, and had only exercised his first amendment rights to free speech. DeRay Mckesson, the Baltimore resident leading the protest in Baton Rouge, had “solely engaged in protected speech,” according to the judge.

“It’s clear that I did nothing wrong that day and that the police were the only violent people in the streets. The movement began as a call to end violence and that call remains the same today,” said Mckesson, after hearing about the outcome of the case. The specific protest in question occurred, CNN reports, after the fatal shooting of Alton Sterling, an unarmed black man, at the hands of a white police officer.

The officer, who kept his identity secret to maintain his own safety, also tried to sue "#BlackLivesMatter," saying that it amounted to a "national unincorporated association." In keeping with the rest of the ruling, however, the judge ruled that it was not possible to sue a hashtag. "For reasons that should be obvious, a hashtag — which is an expression that categorizes or classifies a person's thought — is not a 'juridical person' and therefore lacks the capacity to be sued," Judge Jackson wrote in his ruling.

“‘Black Lives Matter,’ as a social movement, cannot be sued, however, in a similar way that a person cannot plausibly sue other social movements such as the Civil Rights movement, the LGBT rights movement or the Tea Party movement,” the judge wrote, as reported by Reuters. This should set a precedent for anyone who may have had a similar idea, although to some it perhaps would have been obvious already. A movement is simply not an entity that can be sued in court the way that an NGO, company, or private individual can be, and so Black Lives Matter protesters can keep exercising their rights to freedom of speech and freedom of assembly without worry — at least from this front.