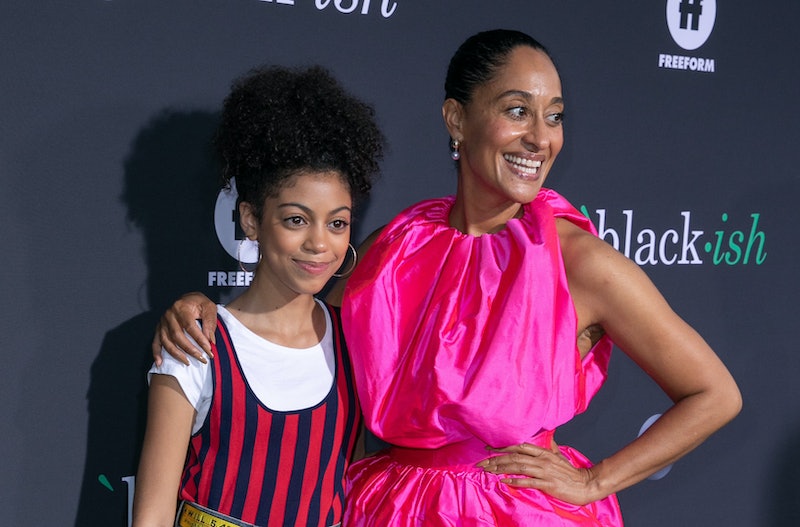 Similar to how Anderson helped lead in grown-ish, the black-ish cast will help introduce mixed-ish when it premieres on Sept. 24. The latest black-ish spinoff follows Bow's upbringing in the 1980s, but Tracee Ellis Ross' role in mixed-ish is pretty minor.

Bow's unconventional upbringing in a new-age compound with her black mother and white father has been discussed on black-ish — often in the context of Dre mocking her for not being black enough. But now Bow's story takes center stage in mixed-ish after the compound is shut down in 1985. Arica Himmel's Bow and her siblings Johan (Ethan William Childress) and Santamonica (Mykal-Michelle Harris) are forced to adjust to life in the suburbs where their free-spirited ways aren't as accepted. Ross narrates as her younger self struggles to find where she fits in — like when she doesn't know if she should sit with white or black students in the cafeteria at lunch.

Ross, like so many people, can relate to those teenager troubles, though she doesn't think that they're all related to race. Ross said at the Television Critics Academy, "I think teenage life is difficult, but I wouldn’t put that on my mixed experience. I would just call that being a teenager. I would not go back. I would not go back to my teen years or my 20s if you paid me. So I don’t know that I would hinge any of that specifically on the mixed experience.” In the series, teenage Bow and her siblings run into issues for all sorts of reasons — because of their mixed race, but also because they grew up in a cult.

Along with Anderson's Dre, Marcus Scribner's Junior, Miles Brown's Jack, Marsai Martin's Diane, and baby Devante, Ross physically appears at the beginning of mixed-ish. Bow and her family in 2019 help establish the flashback to Bow's story. But in a statement to Bustle, ABC confirmed, "Beyond that, there are no plans for her character to appear in future episodes since the show is set in the '80s." This isn't Black Mirror, after all.

Tika Sumpter and Mark-Paul Gosselaar play Bow's parents Alicia and Paul in mixed-ish, but Anna Deavere Smith and Beau Bridges established the roles on black-ish. Sumpter knows some fans will feel the "reverse Aunt Viv effect," given that she and Smith don't share many physical characteristics. She told The Root, “I don’t know if it’s ‘Reverse Aunt Viv’, but what I do know is the creators of the show wanted to serve the story and the story for them is fully-rounded with a brown-skinned woman as the mom."

Of course, the main point of mixed-ish is the focus on the fish out of water experience for the kids, whether it's because of their race, class, or the whole compound thing. Given that it's set in the past, it makes sense that Ross is merely a narrator. Although she could show up as a completely different character for a cameo or something. Fans will just have to keep tuning in to see what she and the mixed-ish writers can come up with.