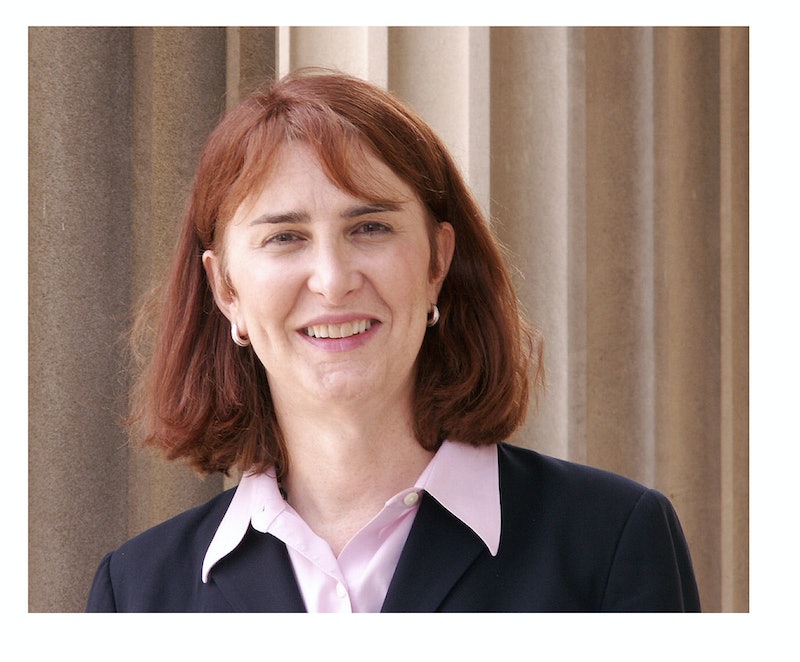 The Trump administration's actions Wednesday evening to take away discrimination protections for transgender students have left the LGBT rights movement outraged. After seeing Barack Obama's Justice Department come out in favor of transgender rights in an unprecedented way less than a year ago, it is a big step backwards for the movement. To have to again defend transgender students from discrimination after enjoying these protections for just a matter of months could leave many activists despondent or defeated — but that's not Mara Keisling.

Keisling leads the National Center for Trans Equality, an advocacy group that fights for the rights of trans Americans. When Bustle spoke with Keisling at an event in Cleveland during the Republican National Convention, she said she hoped that, despite the notably anti-trans platform the Republican Party had just passed, transgender Americans would continue to get growing bipartisan support. She was also hopeful the Republican party could do better in the future.

"Twenty years ago, almost everybody was transphobic. Fifteen years ago, we were fighting both parties a lot. And we've been winning over people in both parties ever since," Keisling told Bustle.

I spoke on Thursday with Keisling. Unsurprisingly, she is not happy with what the Trump administration just did. "He has made it absolutely crystal clear he does not support LGBT people," Keisling says. "He is scaring our families and our children, and allowing Jeff Sessions to act exactly how everybody was afraid Jeff Sessions would act, and that is to come in and within two weeks start taking away people's civil rights."

But despite all of this, Keisling is still an optimist.

"We’re winning. We’re moving forward. This is a rock we have to flow around."

Keisling points to the heightened visibility that transgender people have had recently, with figures like Laverne Cox and Caitlyn Jenner becoming mainstream celebrities. And she sees it as important that people who care about these issues to work to increase that.

"Learn more about trans people, including by meeting them," Keisling tells Bustle. "Support them. Let trans kids know that you're there for them. And advocate, advocate, advocate. Voting is advocating. Going to protests is advocating. But so is writing letters. So is calling your public officials. So is showing up at town meetings. We all have to remember that this is our country, too."

Despite Trump's stance, Keisling remains committed to the belief that trans rights can and should be a bipartisan issue. She says she took solace in the response by Ileana Ros-Lehtinin, a Republican congresswoman from Florida with a transgender son, who released a statement blasting her party's president over his policy. And she was perhaps even more heartened by Chris Curbello, a Republican from Florida, who did the same without needing to have a transgender child to motivate him.