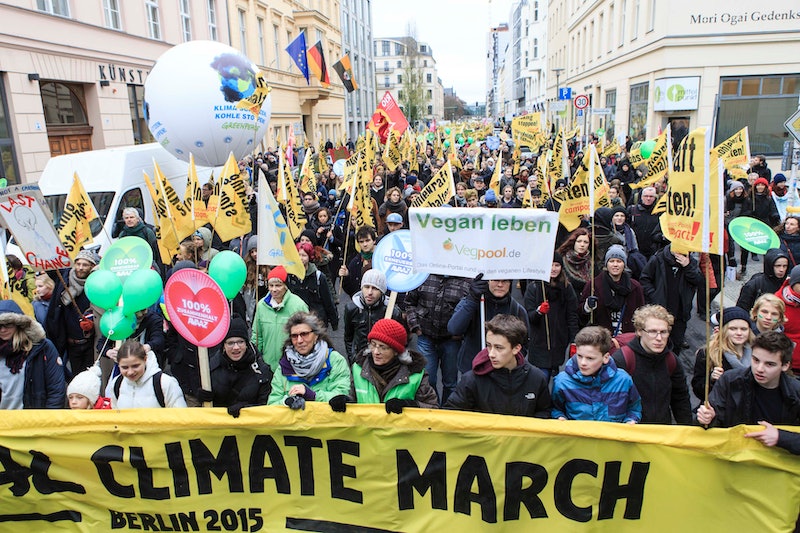 To even utter the notion that Donald Trump is good for the scientific community feels not only counter-intuitive, but even dangerous.. After all, as the New York Times reported, back in 2012 Trump called global warming a Chinese hoax. The man who would become the 45th president tweeted "The concept of global warming was created by and for the Chinese in order to make U.S. manufacturing non-competitive."

Further concerns regarding how seriously Trump takes the effects, let alone the reality, of climate change are validated by his choice in administration appointees, as well as policies, according to his critics. His Environmental Protection agency head, Scott Pruitt, has been accused of being a climate change denier. Also, the Trump administration's budget would cut EPA funding by 31 percent.

Therefore, not for nothing do some worry that the Trump administration poses a threat to the scientific community. In fact, his election and the fears surrounding his presidency are likely driving many of the people participating in Saturday's People's Climate March. On April 29, which is also Trump's 100th day as president, thousands are expected to march in Washington D.C., and there will be other marches and demonstrations in cities across the country.

However, because of the worries about the Trump administration's potential impact on the environment, the president has actually served as a galvanizing force for the scientific community. The organization of and attention to the march, as well as the vocal public concern for the EPA, represent a renewed public support of scientific research — on that has been needed for decades.

"When funding is cut, we can’t pursue higher risk or previously unknown fields."

For Elizabeth Nance, the Clare Boothe Luce Assistant Professor of Chemical Engineering at the University of Washington and founder of the group Women in ChemE, the current administration had forced scientists into solidarity. "The threats on the EPA, climate change, clean air, water and scientific research more broadly are destabilizing our current scientific community, but are also cracking the foundation for future generations to build on," Nance tells Bustle over email, "This has led to more solidarity across all scientific fields, but more uncertainty, as well. When funding is cut, we can’t pursue higher risk or previously unknown fields."

For her, the risks have led her to work more with others in the scientific community and specifically to provide more mentorship for female scientists, "I feel what fits my personality and approach best is through one on one mentoring, and through being accessible, open, and transparent with students and future scientists," she says. "I think every scientist engages with the new political climate differently, and all types of engagement are needed."

Similarly, Katherine Schultz, a senior at the University of Washington and a PEERs (Promoting Equity in Engineering Relationships) leader, tells Bustle that she's harnessed threats of the current political climate to motivate her work.

"I have been working all year (with an all-female team of classmates!) on my senior design project, GreenFeed. We've been forming the basis of a green startup that repurposes retail food waste by converting it into sustainable fish feed for hatcheries and the aquaculture industry," says Schultz in an email to Bustle. She also adds that her group was recently awarded the JARL Prize at the Alaska Airlines Environmental Innovation Challenge.

"For me, there's a new sense of urgency to help come up with environmentally responsible solutions to business practices in the U.S., because clearly the government isn't going to spearhead the process."

Schultz admits that the urgency of the Trump administration, and more specifically the statistics on food waste in America, helped inspire her work. "For me, there's a new sense of urgency to help come up with environmentally responsible solutions to business practices in the U.S., because clearly the government isn't going to spearhead the process," she says.

Like it or not, the political climate has thrust scientists into a position of activism-by-proxy, says Abigail Dillen, attorney and vice president of litigation for climate and energy for Earthjustice.

"We are seeing unprecedented attacks on the EPA and its crucial mission to provide the basics — clean air, clean water, a livable planet," Dillen tells Bustle. "It's impossible to safeguard our health without good, robust science, without strong institutions to keep polluters in check.

"The scientific community is taking a courageous stand not because scientists suddenly want to become activists but because they have no choice. The essential role that scientists play in our society is threatened now."

One of Dillen's focuses at Earthjustice is to galvanize a shift from fossil fuel energy to 100 percent clean energy, a necessity she believes is more evident to the public under Trump. "The raw political power of fossil fuel interests has never been more naked," Dillen says.

While Dillen is certainly driven by a sense of urgency caused by the Trump administration, she still has some optimism for the future. "These are the last years we have left to avoid truly catastrophic climate change, and no one can be under any illusion that the people currently in charge will rise to that challenge," she says. "My hope is that the crystal clarity of the threat we face will mobilize people like never before."