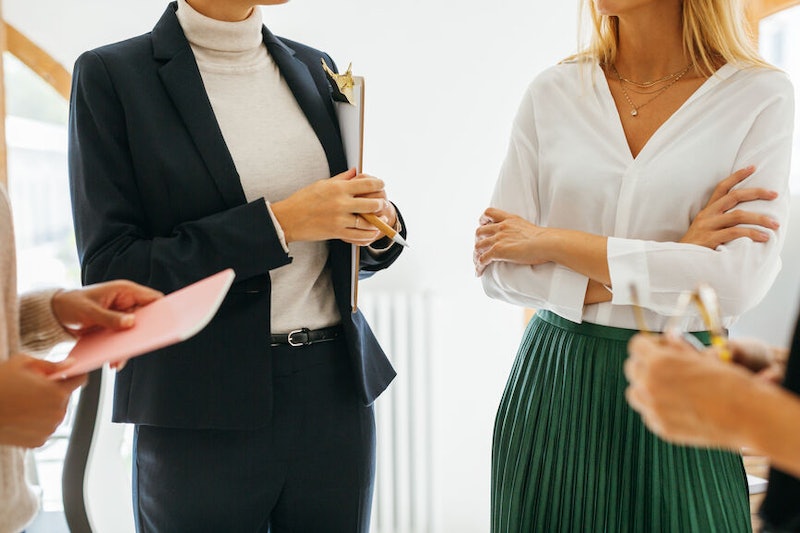 Throughout my teenage years I wanted to be in my mid-twenties. I didn’t know what it meant. I didn’t know what job I wanted. I just wanted to be old enough to fall out of clubs at 4 a.m. and go back to the improbably large flat I shared with my friends. Some would say that’s the influence of too much Sex and the City. Now I’ve reached 25, life does seem to be more about green juice than cosmopolitans. So when did the messy girl stereotype die and the girl boss rise from her ashes? It’s no longer cool not to care. Forget worrying about the guy you kissed on Friday night and think about whether you’ve got enough ‘content’ to sustain your personal brand on Instagram. There are clearly problems with the messy girl stereotype but is the girl boss trope problematic in a different way?

With single girl icons like Bridget Jones, Samantha Jones, and Rachel Green, the Nineties and early Noughties seemed to be an era where the messy, single girl reigned. Where once coming into work on a Monday morning with a plethora of scandalous stories was the only way to do the weekend, now it seems working all hours of the day, monetising a hobby, and making it to the gym at 5:30 a.m are what's rewarded with likes, views, and clout. The 3 a.m. girl-about-town newspaper gossip columns are all but a distant memory, with advice on how to grow your social media following and practice self care in 10-minute slots in their place. Carrie Bradshaw has left the building.

A recent intergenerational study found that your 20s are the most worrying period of our lives. Seventy-seven percent of people in their twenties that life insurance company LifeSearch spoke to said they were worried all the time. The future, political instability, and financial security were all reasons given. So, is girl boss culture and social media helpful or is it just another thing that encourages negative comparisons about our lives, relationships, and feminism?

Clinical psychologist Hayley Higson has weighed up the pros and cons of social media in her work. She says, "I’m not ‘against’ social media usage per se. I use social media personally so it would be hypocritical of me to critique its use without acknowledging the benefits of these sites." However, she says that social media has given us endless possibilities for comparison which can have a direct impact on your mood. She says, "social comparison is believed to be a natural form of human behaviour and functions via a hierarchical model; meaning that people can make comparisons either upwardly or downwardly." She continues:

"Upward social comparison occurs when someone's viewed more positively; having more positive attributes, a better body or better material possessions. While this can be viewed as a source of motivation and inspiration, it's more often associated to the development of negative self-perceptions, feelings of inadequacy, inferiority and low mood."

The reality is, with insta-feminism mantras and dreamy pastel aesthetics, it’s hard not to be sucked into girl boss culture online. Reading a motivational quote can give you a feel-good hit or the strength you need to send that email you’ve been putting off. However, it can help contribute to a sense that no matter what you're doing, it's never quite enough. Is social media helping to create change or just making it easier for users to be hard on themselves? Higson says, "while social media can be a useful platform, it's important to check in with ourselves honestly to evaluate how we feel after using it. If social media is making you feel anxious, upset, or distressed then it may be time for a break." She continues:

"If you find that you are comparing yourself to others and you are feeling worse for doing so, remember that despite how it looks, everyone has bad days and life isn't perfect for everyone."

In some ways my messy girl icons growing up are pretty similar to the modern day girl boss. Samantha Jones has been heralded as an early, great, sex-positive, feminist character. She was a high flyer in PR and it was great to see a woman owning her sexuality on TV. However, she wasn’t trying to be inspirational. Now that our heroines have wandered off the TV screens and are living out their very inspirational lives on social media it’s hard not to draw comparisons between our very real selves and theirs. Perhaps whoever said "comparison is the thief of joy" had a point.